The Workplace of Today Is Not What It Was 35 Years ago. Computational Thinking Is the New Basic Requirement 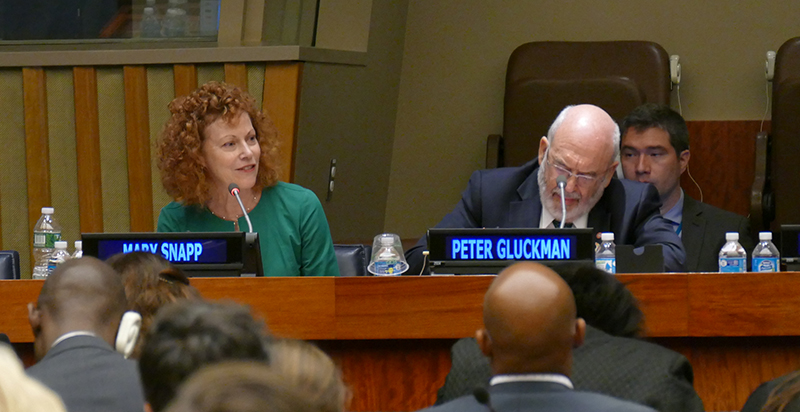 Mary Snapp, Microsoft corporate vice president and lead of Microsoft Philanthropies, speaking during a panel at the STI Forum at the United Nations in New York City on May 16, 2017. (Photo credit: Microsoft)

As technology continues to advance, we have a shared responsibility to ensure that everyone benefits in the future.

In 1983, the commissioners of “A Nation at Risk,” the report on American education, understood the need to foster a society of learners. They wrote, “At the heart of such a society is the commitment to a set of values and to a system of education that affords all members the opportunity to stretch their minds to full capacity, from early childhood through adulthood, learning more as the world itself changes.”

It’s clear that previous eras of innovation brought job disruption and transitions to new kinds of education and skills. Just as the workplace of today bears little resemblance to the one in which I began my career, the workplace of tomorrow will be vastly different. Change is also happening more rapidly than before, because of the speed of technology, and job disruption along with it. That’s why it is equally important for both students and those already in the workforce to have opportunities to gain new skills throughout their careers.

A new report from the Organisation for Economic Co-operation and Development shows that approximately 10 percent of U.S. jobs will be lost and nearly 28 percent will be transformed into positions requiring a clutch of new skills. Even today, more than half of America’s employers say they can’t find enough workers with the right technology skills to fill open jobs. In the manufacturing sector, for example, many jobs lost during the recession are unlikely to come back, but there are still more than 427,000 positions unfilled. That’s enough to employ more than half the population of Detroit.

These challenges in the manufacturing sector are relevant to discussions about changing the way we educate students and retrain adults. In an important study from Deloitte, manufacturing executives say that among the highest-demand attributes for workers are computer skills and the ability to problem-solve.

Machinists today, for example, program numerical control technology to cut precise metal parts and shape raw materials — a different skill, but adapted from the hands-on work of years past. And the demands for technical skills go far beyond the manufacturing and technology sectors. Nearly every field, from medicine to customer service to marketing, increasingly requires some level of technical skill.

Given these developments, what it means to be “educated” today has also evolved. Reading and math literacy are still fundamental. But now students must also have a deeper understanding of the language of computers, mixed with the ability to problem-solve and adapt. In fact, “A Nation at Risk” laid out five “new basics,” including computer science coursework, necessary for the success for America’s students. What was true in 1983 is even more so today. By learning to code, students learn a process to form a problem statement and express a solution ready-made for people or computers. Computer scientist and professor Jeannette Wing calls this “computational thinking.”

I recently spoke with a high school principal whose university-educated daughter lost out on an advertising job because she could not code. This confirmed for me that computational thinking gives students the confidence not only to be creators, but also to better adapt in an increasingly technology-driven workplace.

Despite the importance of computational thinking, there is a significant gap in our schools. In the U.S., most high schools do not offer computer science. At the college level, according to Code.org, there will be 1.4 million computer science–related jobs in the U.S. by 2020, yet college graduates are expected to fill less than a third of those jobs.

We also need to continue investing in programs to help Americans find and train for better-paying jobs while connecting employers with the talent they need to thrive in the digital economy. A new partnership in which we’ve invested works with stakeholders to help those already in the workforce learn what skills are in demand, where to get training, and how to connect with employers.

Being “educated” is more than a credential, a license, or a degree. Today, an educated person must embrace learning throughout their lifetime to continually add competencies that employers value. A lifelong learner increasingly will seek additional education, often with technical instruction, throughout their career. That’s why we need to prepare young people to learn how to learn and to give them confidence to understand changing technology. And we need to make training available to adults later in their careers, to help them adapt to a fast-changing technological world.

As technology moves forward, no one should be left behind. Nothing is more important. Working together — the private sector, the public sector, and nonprofits — we can ensure that all workers can thrive, both today and tomorrow.

Mary Snapp is Microsoft corporate vice president and lead of Microsoft Philanthropies. She will be participating as a panelist in the Reagan Institute Summit on Education.