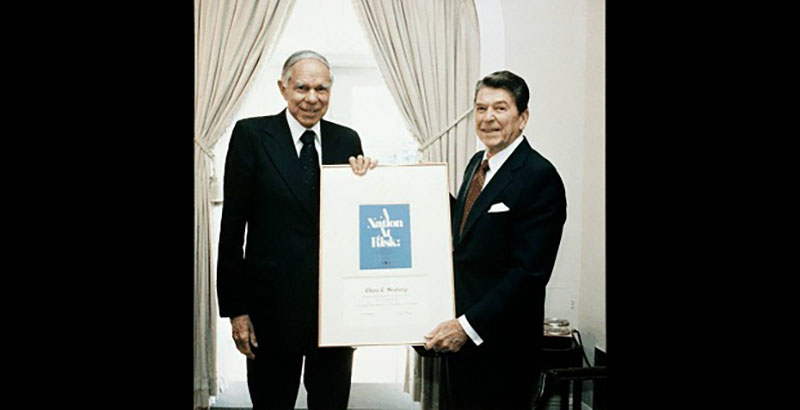 Ahead of the Reagan Institute’s Summit on Education, which commemorates the 35th anniversary of the release of “A Nation at Risk,” The 74 is publishing a special series of articles, essays, and retrospectives about the release and the aftermath of the famous education report. See our full series here.

“A Nation at Risk,” the damning report that sparked the modern education reform movement, turns 35 this year. The Ronald Reagan Foundation and Institute is marking the anniversary with a daylong summit to discuss progress since the report’s release and the future of American education.

The report, released during Ronald Reagan’s presidency, warned of a “rising tide of mediocrity” in American schools that demanded national attention.

The Reagan Institute Summit on Education, slated for April 12 in Washington, D.C., will convene a diverse group of education and political leaders, including Sen. Lamar Alexander of Tennessee, Rep. Virginia Foxx of North Carolina, Newark Mayor Ras Baraka, State Superintendents John White of Louisiana and Carey Wright of Mississippi, and Télyse Masaoay, a Vanderbilt University student, among others.

“Our current political climate is characterized by factionalism and increasing division,” Reagan Foundation Executive Director John Heubusch told The 74 in an email. “But the next generation of leaders — who are the hope of this democracy — need us to unite on common ground. There is a need for substantive, bipartisan discussion on American education policy.”

“A Nation at Risk” called on Americans to cultivate “a learning society” that values rigorous academic standards and constant teaching and learning across industries. In that spirit, the summit will open with a conversation between former secretary of state Condoleezza Rice and former secretary of homeland security and current University of California president Janet Napolitano about what the learning society looks like in 2018 and how it can create opportunities for all students.

The summit will close with a panel discussion among four former secretaries of education. John B. King, Arne Duncan, Margaret Spellings, and Rod Paige will talk about the “the role education plays writ large in society” to prepare students not only for college and career but also to “come to the public square both engaged and informed,” Tony Pennay, chief learning officer for the Reagan Foundation, told The 74.

74 Interview: John King on His Year as Ed Secretary, the Trump Administration, His New Role at Ed Trust

In between, the conference will host discussions about current topics like the Every Student Succeeds Act, “the new basics” students need to succeed today, and the changing role of college in American society.

Pennay said he is excited about the star power and political diversity of the speakers.

“Getting that really big cross section of folks all coming together … is a really good thing,” he said.

Pennay added that he hopes the summit will become an annual event and that this year’s is just “the start of a conversation.” He sees the summit as part of the foundation’s work to continue Reagan’s legacy in education, grounded in the president’s farewell address, which declared, “An informed patriotism is what we want.”