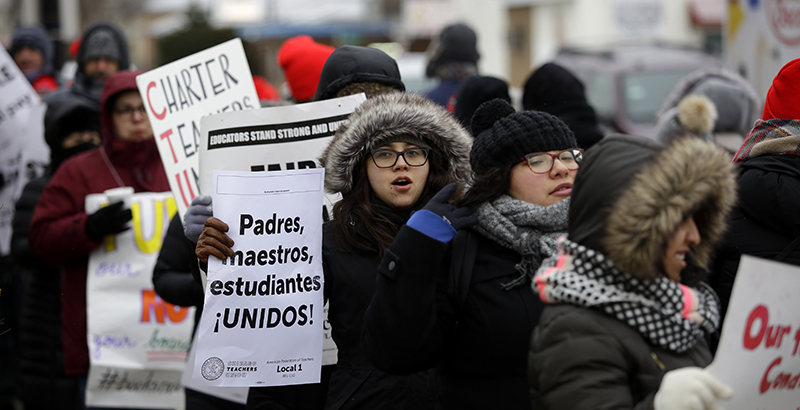 The Acero charter school network and the Chicago Teachers Union reached a tentative agreement on a four-year contract early Sunday, bringing to an end a four-day teacher strike. It was the first strike of charter school employees in U.S. history.

This singular event garnered a great deal of press coverage. Several narratives were popular, which involved tying the strike to:

● the stalling of the charter school movement in Chicago and Illinois in general;

● the Chicago Teachers Union strike of 2012;

● the growing union success in organizing charter school teachers; and

● a union show of force in defiance of the U.S. Supreme Court’s Janus ruling.

The primary purpose of a strike is to extract concessions from an employer when other methods fail. The Acero teachers were successful in this regard, and so perhaps the strike was justified. But there are charters in 43 states and some have been unionized for years. Teacher unions have opposed charters since the first one opened in 1992. So why did the first strike occur in Chicago in 2018?

No reporter delved into that question.

The first thing to note is that as the number of charter schools has grown, so has the size of charter school networks. Small, independent charters are at low risk of unionization, much less strikes. Even at their height, teacher unions have budget constraints, and organizing drives cost money and staff resources. A cost-benefit analysis of unionizing a 12-teacher school and then effectively directing a job action would keep most unions away.

When a union can gain several hundred members and negotiate a single contract for all, recruiting becomes much more appealing. So you see union campaigns at the Noble network, or the Alliance network, but not at the San Carlos Charter Learning Center.

The Acero teachers used to belong to a separate local affiliate of the American Federation of Teachers, called the Chicago Alliance of Charter Teachers and Staff (ChiACTS). Last year, it agreed to merge with the Chicago Teachers Union, which represents 24,000 employees in the district’s traditional public schools.

An examination of ChiACTS finances makes it abundantly clear why the merger was necessary. In August 2017 the charter union reported 894 members, who contributed $78,000 in dues. Unfortunately, the union had $105,000 in expenses.

Rather than a charter unionization success story, ChiACTS was kept afloat on CTU/AFT subsidies. The merger simply removed the pretense.

Not that CTU was performing that much better financially. The union lost 20 percent of its membership in the last eight years — yes, during the presidency of teacher union icon Karen Lewis.

The union is experiencing internal dissension over issues like the disbursement of funds from the union-controlled foundation. An opposition caucus has formed to run candidates against the incumbent slate of officers. CTU staffers have six open complaints against union executives with the National Labor Relations Board.

Amid such turmoil at a time when union members have a choice whether or not to join, CTU needed a public demonstration of its capabilities. What better way than a strike, which created the union’s mythology in 2012? To organize the first one ever at a charter school, and to follow it up with a concerted job action at the other charter sites CTU represents, is a no-brainer from the union’s standpoint.

It is difficult enough to reconcile the aims of management and employees. When the internal interests of the union are added to the mix, it increases the difficulty by 50 percent. Compromises and avenues of agreement are shut down because the union requires a strike. For unions, the question becomes not whether teachers received better pay, benefits, and working conditions, but how they got them.

If they got them without direct union action, it is as bad as not getting them at all.