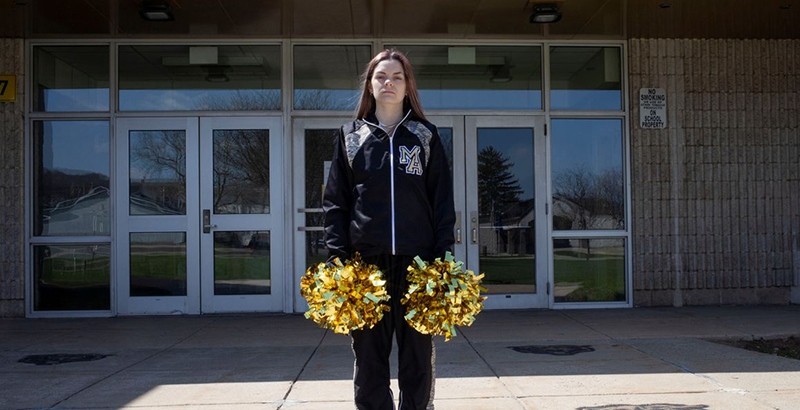 A Pennsylvania school district violated a high school cheerleader’s First Amendment rights when officials punished her for a profane, off-campus social media post, the Supreme Court ruled on Wednesday in a high-profile case that could affect how schools across the country discipline students for their online behaviors.

But the court’s 8-1 ruling doesn’t prohibit schools from regulating students’ off-campus speech altogether. Given the rise of online learning, the court declined to create a “broad, highly general First Amendment rule” defining what counts as impermissible off-campus speech, but it said schools could regulate students’ comments in certain instances such as those involving “severe bullying or harassment” or to confront violent threats.

In this particular case, that threshold was not met, the justices said. The opinion was applauded by both civil rights activists and those who worried the court could hamper schools’ ability to combat online abuse.

“What we saw today is a huge victory for the rights of 50 million young people across this country to speak freely outside of school without having to worry” about being punished for social media posts deemed offensive or controversial by school officials, said David Cole, the legal director at the American Civil Liberties Union, which represented the student and her family. “When students leave school everyday, they don’t have to carry the schoolhouse on their backs when it comes to their free-speech rights.”

The case, Mahanoy Area School District v. B.L., centers around Pennsylvania high school student Brandi Levy’s 2017 Snapchat post expressing frustration because she didn’t make the varsity cheerleading squad. In the post, which was uploaded off school grounds on the weekend, Levy took a selfie of herself in which she displayed her middle finger and included a profane caption: “Fuck school fuck softball fuck cheer fuck everything.”

When the message made its way back to campus, Levy, then 14 years old, was suspended from participating on the junior varsity team for a year. School officials said she violated rules that required cheerleaders to “have respect” for the school, coaches and other cheerleaders and to avoid “foul language and inappropriate gestures.”

Before the case made its way to the Supreme Court, the federal Third Circuit Court of Appeals found that educators violated Levy’s First Amendment rights because they lacked the authority to punish off-campus speech, even in instances where it disrupts school. Yet, in contrast to the Third Circuit, the Supreme Court majority wrote that they “do not believe the special characteristics that give schools additional license to regulate student speech always disappear when a school regulates speech that takes place off campus.”

But in Levy’s case, the court found that the social media post did not cause a substantial disruption at school or lead to a serious decline in morale within the cheerleading squad.

“It might be tempting to dismiss [Levy’s] words as unworthy of the robust First Amendment protections discussed herein,” Justice Stephen Breyer wrote in an opinion for the court’s majority. “But sometimes it is necessary to protect the superfluous in order to preserve the necessary.”

Breyer wrote that schools should rarely stand in place of parents regarding students’ off-campus speech and that courts should be “more skeptical of a school’s efforts to regulate off-campus speech,” and that monitoring student expression 24 hours a day “may mean the student cannot engage in that kind of speech at all.” Additionally, he wrote that schools have an interest in protecting students’ unpopular speech, especially when it occurs off campus, “because America’s public schools are the nurseries of democracy,” an apparent nod to the former Supreme Court Justice Louis Brandeis, who famously said that states are laboratories of democracy.

At issue was a decades-old legal standard set by the Supreme Court in the 1969 case Tinker v. Des Moines Independent Community School District, which said that students don’t shed their First Amendment rights at the schoolhouse gate but that educators may punish students for on-campus speech that causes, or is likely to provoke, a substantial disruption to the learning environment. The new case sought to determine to what extent that standard applies to off-campus speech.

During a call with reporters, Levy said she was happy with the outcome on Wednesday.

“I feel as if the school went a little too far and I’m glad that the Supreme Court agreed with me,” Levy said, adding that she was simply expressing her frustration the same way any other teenager would and that students shouldn’t have to worry about being punished for expressing themselves. “I never could have imagined that one single Snap could turn into a whole Supreme Court case, but I’m glad that my family and I advocated for the rights of millions of students.”

Leading up to the court’s decision, many advocates and legal scholars predicted the case would generate the most important student speech ruling in decades. Such a prediction held true, said Jeffrey Rosen, the president and CEO of the National Constitution Center in Philadelphia.

“Maybe for the first time since the Tinker case, the court gave a reason for why it’s important to protect especially unpopular speech, and that’s because students in school learn how to be future citizens,” Rosen said. In his opinion, Breyer gave schools “three very strong reasons for why schools should not assume that they have a blank check to regulate off-campus speech and, in fact, the court is saying very clearly that schools have far less authority to regulate off-campus speech than on-campus speech.”

The Mahanoy Area School District declined to comment. Attorney Lisa Blatt, who represented the district, didn’t respond to a request for comment. During oral arguments, Blatt argued that Levy should have been held to a higher standard than her peers because her participation on the cheerleading team made her a “school ambassador.” The school district, and a host of leading education groups including the National School Boards Association, said that educators needed authority to regulate students’ off-campus speech to ensure campus safety. In a brief, education groups said that a broad ban on regulating off-campus speech undermines educators’ ability to “effectively discipline students who engage in off-campus speech that harasses others or otherwise foreseeably disrupts the school environment.”

Deborah Temkin, the vice president for youth development and education research at Child Trends who has devoted much of her career to preventing school harassment, called the ruling a “huge win,” for bullying prevention efforts. She agreed the Pennsylvania district lacked authority to punish Levy because she “wasn’t targeting another student,” and her comments had a marginal connection to the campus. But by rejecting the Third Circuit’s ruling, the Supreme Court affirmed that schools have some authority over students’ off-speech comments though a future case could be necessary. Had the justices upheld the Third Circuit ruling, she said that state anti-bullying laws could have been at risk of being found unconstitutional.

“Because they declined to put in the full parameters, it doesn’t fully solve the issue at hand,” she said. “There are national implications because this is the first time that the Supreme Court said, even in a narrow way, that schools have authority off-campus.”

In his dissent, Justice Clarence Thomas questioned whether schools should have greater authority to discipline students’ for their off-campus social media posts, which “can be received on campus (and can spread rapidly to countless people).” Because social media posts can reach greater audiences, they could be more harmful to school environments than an off-campus in-person conversation, he wrote.

Thomas also argued that the court’s majority opinion “states just one rule: Schools can regulate speech less often when that speech occurs off campus,” Thomas wrote, adding that “courts (and schools) will almost certainly be at a loss as to what exactly the [Supreme Court’s] opinion today means.”

Yet Francisco Negrón, the chief legal officer at the National School Boards Association, said the court’s majority appeared “very deliberate” in not defining which specific types of students’ off-campus speech should reach the bar of punishment and left significant local decision making to educators on the ground.

“There’s no way that the court could identify every single circumstance of student speech” that disrupts the school environment, he said, especially as technology evolves and students get new ways to communicate. The opinion recognizes that student speech today is very different than it was a few decades ago, he said, and that the most important factor is its impact on schools rather than where the speech occurred.

Education groups aren’t the only ones who cheered the decision: Student activists themselves said the court struck the right balance. Among them is Matt Post, a Yale University junior and judicial advocacy associate with the gun violence-prevention group March For Our Lives. Along with students from across the country, including current and former student school board members, Post warned that a ruling in the Pennsylvania district’s favor could have a chilling effect on student activism and could hamper teens’ ability to speak out about problems at their schools. But ultimately, “the Supreme Court sided with students,” he said.

“The Supreme Court upheld our right as young people to have a say in our democratic process and not be punished for it,” said Post, who lauded the justices for recognizing the critical piece student speech plays in promoting civic engagement. “I hope school systems all around the country recognize this important role that they have as nurseries of democracy and do more to spark and foster student involvement and student activism.”

But for schools that seek to suppress students’ voices, he said the decision should offer caution.

“School districts across the country should take this opinion as a sign that to come down on student expression and student speech is not tolerated in this country and is antithetical to the Constitution,” he said. “Not every instance where a school district punishes a student for off-campus speech makes its way up to the Supreme Court. It happens every day.”