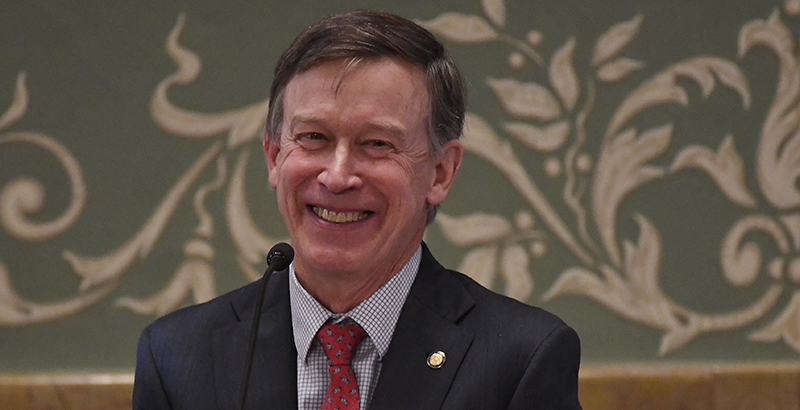 The 74 is proud to partner with Axios and the Walton Family Foundation to present a special conversation about schools and state-level education policy with a trio of governors from across the political spectrum. “Raising the Bar: A Conversation on Education in America” (see details and RSVP here) will bring together Governors John Hickenlooper (D-Colorado), Roy Cooper (D–North Carolina) and Jeff Colyer (R-Kansas) to speak with Axios executive editor Mike Allen in Washington, D.C., on February 23. This is one of three articles we’ve produced to offer insights into the key education issues affecting their states:

As the 2018 midterm election approaches, time is running out for Gov. John Hickenlooper. Setting aside rumors of the Colorado Democrat’s 2020 presidential ambitions, Hickenlooper is term limited and, as such, has less than a year to accomplish some big goals.

That gives Hickenlooper a short window to work with lawmakers to solve some of the state’s most pressing educational issues. From education funding to school accountability, legislators in Denver have proposed more than a dozen bills this year that could affect Colorado schools, where about a third of eighth-grade students are proficient in math and reading.

The state of Colorado, and the city of Denver in particular, has long been a hot spot for contentious education reform debates, and 2018 promises to be no different. Sen. Michael Bennet, a former superintendent in Denver, and Rep. Jared Polis, a Democratic gubernatorial candidate and former state board of education member, could help drive the issue to the forefront.

As we approach the 2018 election season, The 74 is teaming up with Axios to offer a panel discussion featuring three leading governors — including Hickenlooper — to discuss the most pressing education issues across the country. After federal lawmakers approved the bipartisan Every Student Succeeds Act in 2015, state governors and education departments were empowered to develop their own strategies to improve local schools.

Ahead of the event, which takes place on February 23 in Washington, D.C., we’re taking stock of some of the key education conversations in Colorado and highlighting legislative proposals that aim to spur change.

During Hickenlooper’s annual State of the State speech in January, the governor praised recent increases to school spending, but he wasn’t sparing in his words about the state’s education funding shortfall. Despite school funding increases in recent years, “We remain roughly three-quarters of a billion dollars behind the funding Colorado voters placed in our Constitution nearly two decades ago,” Hickenlooper said. Hickenlooper was referring to a state constitutional amendment — approved by ballot measure in 2000 — that required lawmakers to bolster education spending by population and inflation. But that target hasn’t been hit since the Great Recession.

The total education-funding shortfall rings to the tune of $828 million. Hickenlooper has placed education finance among his top priorities for 2018.

And if a group of superintendents have their way, the state’s education funding formula could be completely recalibrated this year.

Among bills that look to reshape education finance this year is one that aims to adjust the state’s school funding formula more than two decades after the current system was put into place. More than 170 school superintendents have rallied around the bill, which would direct more money to school districts that serve specific high-need student populations, such as English language learners.

“The current formula is all about school districts, while our plan is centered more on kids and what they need to succeed,” Mapleton Public Schools Superintendent Charlotte Ciancio told the Denver Post. “It provides a road map for providing a more fair and adequate level of funding for students.”

That proposal, however, comes with a hitch: In order for it to work, Colorado residents would have to accept a $1.7 billion tax hike, a reality state voters have been reluctant to embrace in years past.

As lawmakers work to tackle school funding, Colorado residents are also taking on the issue through ballot initiatives. More than a dozen have already been filed with the Secretary of State Title Board, with hopes to send billions of additional dollars into public schools.

“We need to be honest with ourselves and the voters: This [funding shortfall] won’t go down much without their help,” Hickenlooper said in the January address. “And if we are being really blunt, it hurts rural Colorado more than the Front Range,” he added, referring to the urban stretch along the southern Rocky Mountains.

For years, Denver Public Schools has been hailed as a hotbed for education reform initiatives through its “portfolio” district. But the district came under fire late last year, when a coalition of civil rights groups accused the district of inflating its elementary school ratings, in particular by overstating literacy gains. In February, the district announced a plan to calculate ratings differently next year.

As that issue continues to make waves locally, state lawmakers are considering several bills this legislative session that concern the state’s school accountability system. In the wake of the “opt out” movement that has hit school districts in Colorado and beyond, one bill would target schools that reward students for taking state standardized tests. Colorado law already prohibits districts from punishing students who opt out of state assessments. The latest bill would do the opposite, prohibiting states from rewarding students who agree to take state tests, while excluding those who opt out.

Meanwhile, one bill would allow school districts to pilot accountability systems that are “student-centered,” another would reward schools through a new performance indicator for bolstering arts education, and a third proposal aims to eliminate the state’s social studies assessment outright.

While proponents of the social studies bill argue that students are opting out of the exam and do not take it seriously, Rep. Jim Wilson expects “sparks” as lawmakers debate the issue. Opponents, including Wilson, maintain that the assessment is necessary because students should understand the U.S. government and economy.

In addition to education funding, Hickenlooper’s State of the State speech focused particularly on improving the quality of life for Colorado’s most remote residents, emphasizing the opioid epidemic, broadband access, and a teacher shortage riling rural schools.

For years, Colorado’s rural schools have struggled to fill key teaching positions, and the outlook is expected to worsen as enrollment in teacher-training programs dwindles and an increasing share of teachers become eligible for retirement.

Meanwhile, state lawmakers have another idea to attract teachers to remote districts, where pay is generally lower than in the state’s urban centers. One bill would create a $10,000 fellowship program for students pursuing a teaching career. The fellowship would encourage 100 people per year to student-teach at a rural Colorado school district.

The legislation also takes aim at high teacher turnover rates in Colorado’s most remote schools. Educators who accept the fellowship would be asked to pay back the money if they’re offered a full-time teaching gig after the program ends but decide to turn down the job.

In his annual budget proposal, Hickenlooper had another idea — which may be the most Colorado thing ever: leveraging $10 million in marijuana tax revenue to help attract and retain teachers in rural schools.