“The Prize”: The Unwritten Appendix, By Those Inside Newark’s Improving Schools

The percentage of black Newark students attending a school that beat the state proficiency average has tripled in the past 10 years, and this increase can be attributed almost entirely to the growth of the charter sector.

For 2014, the most recent year that data is available, more than 40% of the black students enrolled in Newark charters attended a school that beat New Jersey’s average in their grade/subject. In district schools, that was only true for 6% of students.
Contrary to some critic’s claims, charter growth hasn’t “eviscerated” the district — at least not from a student achievement perspective. When you compare pass rates on state assessments for African-American students in Newark Public Schools to the state , it’s flat. The percentage of students attending schools beating the state average in reading and math is about the same in 2014 as it was in 2006.
That sameness to the Newark Public Schools' performance also means that the much stronger showing of charter schools when compared to the state average cannot be explained by high-performing students selectively leaving district schools for charters. This is real academic progress for Newark’s most underserved students.
Research on Newark charters hard to deny
Newark charter schools were recently the subject of a comprehensive, multi-year study by CREDO, the Center for Research on Education Outcomes at Stanford University. That study found that Newark's charter schools were among the strongest in the country, ranking 2nd only to Boston. In CREDO's words, “The charter school results presented in this report place New Jersey among the highest performing states studied to date.”
Students enrolled at Newark charters made additional learning gains of more than 0.2 standard deviations in both reading and math — or in plain English — they gained "an additional seven and a half months in reading per year and nine months per year in math compared to their traditional public school counterparts."
The CREDO report is the most rigorous work conducted on Newark charter schools, by a considerable margin. Their research team had access to individual student records, which means that their analysis could control for individual student demographic characteristics, making it much more robust than any work that depends only on the school-level totals released by the state. CREDO's research methodology has been peer-reviewed and scrutinized by technical experts.
Keep in mind that an earlier CREDO study on a national sample of charter schools was a frequent talking point for reform critics. That was until subsequent CREDO work showed that "Urban charter schools in the aggregate provide significantly higher levels of annual growth in both math and reading."
The CREDO work spotlighted particularly strong gains for Newark charters with African-American students. In fact, Newark's charter sector ranked Number 1 in the nation for African-American achievement gains in reading.
These numbers are echoed by independent analyses of KIPP's achievement data, like the recent Mathematica study, which used gold star experimental methods and found that KIPP elementary, middle and high schools had "positive, statistically significant, and educationally meaningful impacts" on student achievement.
Mathematica's review of Uncommon Schools, the network that runs the North Star schools, found "statistically significant… [and] substantively meaningful" impacts on math and reading achievement.
As you can probably guess, there's been a healthy back-and-forth between the CREDO team and school reform skeptics. You can read the technical appendix if you want the blow-by-blow details.
More research on Newark charters would be great, and it would be nice to see additional experimental designs, to rule out any shadow of a doubt about these findings.
But the bottom line here is that all of the high-quality research work done on Newark charter schools points to real, meaningful learning gains. It's borne out in the state achievement data, and supported by independent and credible evaluations of KIPP and Uncommon Schools.
It's no longer enough to quibble about experimental methods — there's a substantial body of evidence on Newark charters, and it all points in the same direction.
Charter surge came from Newark’s lowest-performing schools
Most stories on Newark cite the aggregate enrollment numbers, noting that students are split roughly 70 percent to 30 percent between traditional district and charter schools.
While accurate, those statistics miss a much more dramatic story happening within the city. Charters enrolled 42 percent of the city's African-American students last year, and are on pace to enroll fully half of the city's African-American population in the 2015-16 school year, or soon thereafter.
Breaking these enrollment figures out by ward shows that these changes haven't been a uniform, citywide phenomenon — rather, the movement out of district schools is uneven. Schools in the South and West wards, historically the city's lowest performing, have seen parents defect in droves to charter options.
The following map shows change in enrollment in Newark Public Schools, using 1998 (the first year of data published online) as a baseline. 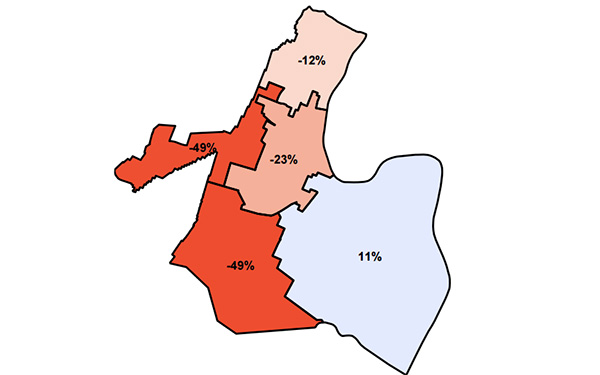 Enrollment in district schools is down by nearly 50 percent in the South and West wards and with total Newark school enrollment (district plus charter) basically flat, it's abundantly clear that those students are now in Newark charters.

Andrew Martin is the director of special projects at KIPP New Jersey, a former classroom teacher for both KIPP and the New York City Department of Education, and a graduate of the University of Chicago. 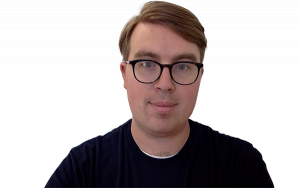