Trump Picks His Education Secretary: The First 6 Things to Know About Betsy DeVos 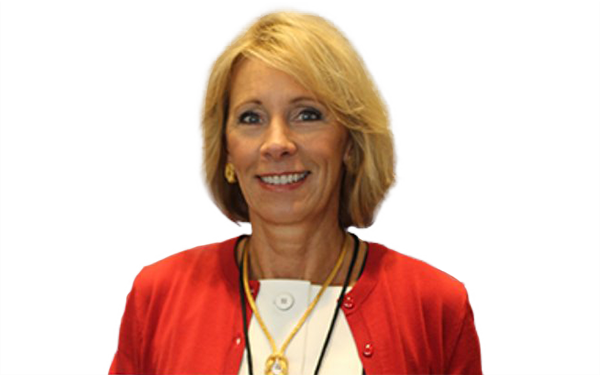 Breaking coverage of Betsy DeVos today at The 74:
—Naomi Nix: DeVos distances herself from Common Core, aligns with Pence on local-driven standards
—Exclusive: DeVos talks about why school choice should be a bipartisan issue
—Mark Keierleber: New to Team Trump, DeVos has long been on Team Pence
—Michael Petrilli: 20 questions for the new education secretary nominee
Get more news on the Trump transition and analysis of the DeVos nomination; sign up for The 74 newsletter.
Shortly after 1 p.m. Wednesday, the transition team for President-elect Donald Trump announced he will nominate billionaire Michigan philanthropist and school-choice advocate Betsy DeVos to serve as his secretary of education.

“Betsy DeVos is a brilliant and passionate education advocate,” Trump said in a statement. “Under her leadership we will reform the U.S. education system and break the bureaucracy that is holding our children back so that we can deliver world-class education and school choice to all families.”

DeVos has never worked in the public school system but has long been active in education and GOP causes. The selection appears to reflect Trump’s promise to give billions in federal funding to school-choice programs and to scale back the Education Department.

“I am honored to work with the President-elect on his vision to make American education great again. The status quo in ed is not acceptable,” DeVos tweeted.

I am honored to work with the President-elect on his vision to make American education great again. The status quo in ed is not acceptable.

Together, we can work to make transformational change to ensure every student has the opportunity to fulfill his or her highest potential.

Here are six important things to know about DeVos’s views and history.

She also sits on the board of the Jeb Bush–led reform group Foundation for Excellence in Education (ExcelInEd). In her home state, after a failed attempt to change the constitution to allow the use of school vouchers, she created the Great Lakes Education Project to promote expansion of charter schools.

DeVos’s record implies support for what so far appears to be the centerpiece of Trump’s education agenda: $20 billion promised to states that support charter and voucher options — as well as a president who will be the “nation’s biggest cheerleader for school choice,” as Trump has described his prospective presidential role. In 1993, she and her husband, Dick, were instrumental in passing Michigan’s first charter school bill.

Initially, she supported Ohio Gov. John Kasich for president, casting her vote as an at-large Kasich delegate at the Republican National Convention, according to MLive.com.