The Duncan Era: Assessing a Tenure That Drove Swift Change — and Sharp Backlash 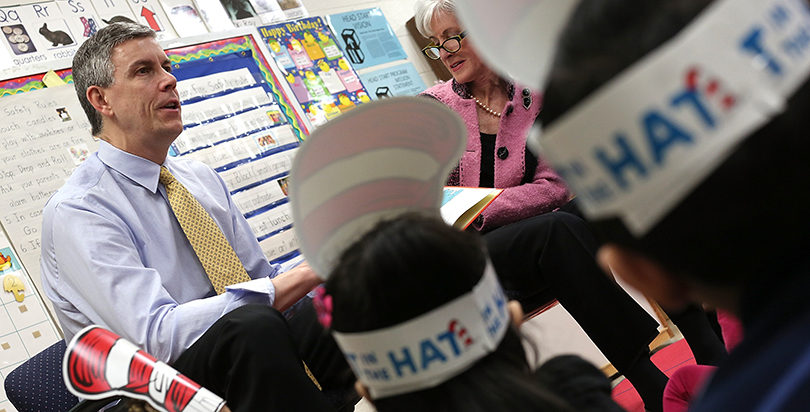 No one doubts the significance of Arne Duncan’s tenure as Secretary of Education. He has aggressively shaped education policy for the last several years, and his legacy will endure for many more to come. He has presided over both a dramatic increase in the federal government’s authority over American schools as well as a sharp scaling back of that federal power in the form of the reauthorized Elementary and Secondary Education Act, which was signed into law just last week.

In many ways the latter can be seen as a response of the former, a rebuke to the agenda he so aggressively put forward, but in other ways it is the perfect capstone, cementing his place in history. Duncan has effectively taken the ladder up with him, meaning the next President will have limited ability to fully roll back the ambitious goals Duncan’s Department of Education pursued. States, empowered by the new law, will be able to continue with Duncan’s policies or roll them back.

The moderate nominee — the polarizing Secretary

Most education pundits tend to forget that when President Obama was considering his choice for Secretary of Education, his former basketball buddy and Chicago Public Schools CEO Arne Duncan was considered the compromise choice between the reformers and the unions. Although Duncan had pushed accountability, school closures, and mayoral control in Chicago, he had not engaged in the high-profile, fiery rhetoric of D.C. Chancellor Michelle Rhee or New York City Chancellor Joel Klein. Duncan had also signed on to a union-friendly education manifesto that focused on wraparound services and pre-K. In fact, American Federation of Teachers president Randi Weingarten wrote a letter to the New York Times praising Duncan’s collaboration with Chicago’s local teachers union and said he “actually reaches out and tries to do things in a collaborative way.”

Duncan was also receiving early praise in conservative circles. Republican Senator Lamar Alexander declared at Duncan’s confirmation hearing: “President-elect Obama has made several distinguished cabinet appointments, but in my view of it all, I think you are the best.”

Fast forward to the present. One national teachers union has called on Duncan to resign; the other sardonically put him on an “improvement plan,” in an attempt to mock his signature teacher evaluation policy. Weingarten’s praise has faded: “There’s no question that the Department of Education’s fixation on charters and high-stakes testing has not worked.” Alexander, too, now bemoans Duncan’s so-called “national school board.” Rick Hess, of the conservative American Enterprise Institute wrote that Obama and Duncan had “pursued a polarizing, bureaucratized, and Washington-centric education agenda while exploiting and then draining a substantial reservoir of bipartisan goodwill.”

To admirers, however, Duncan was an advocate for kids even when it wasn’t politically popular. After Duncan announced he was resigning, President Obama said, “Take a look at what Arne has accomplished over the last six and a half years. He’s one of the longest-serving Secretaries of Education in our history -— and one of the more consequential.”

Duncan was able to implement his agenda in a way no other Secretary of Education had before through smart leverage of both carrots and sticks, pushing states to enact favored policies.

The carrot came in the form of Race to the Top, a program attached to the federal stimulus, which invited cash-strapped states to compete for funds by adopting common standards (meaning, essentially, the Common Core), instituting teacher evaluations that used student test scores, and expanding charters. The vast majority of states applied for a grant and research confirmed that the program drove significant state-level legislative change.

Duncan continued to push teacher evaluations, his signature K–12 policy, by awarding federal waivers from the prescriptive aspects of No Child Left Behind, the federal law which was supposed to be renewed in 2007, but remained on the books until just last week. Duncan set out a series of conditions for receiving a waiver, most significantly that state teacher evaluations consider student test scores, among other measures. Currently 43 states use student achievement in teacher evaluation, compared to just 15 in 2009.

Testing, Common Core and the backlash

Efforts to change how teachers across the country were evaluated proved both technically and politically challenging.

Districts rather suddenly had to use tests for evaluation, including for teachers of subjects like gym and social studies where standardized tests didn’t exist. Some districts, with the feds’ encouragement, began judging teachers based on scores of subjects and students they didn’t teach; this sparked lawsuits and outrage among teachers. Although union leaders initially expressed some tentative support for new evaluation systems, upon implementation unions quickly backed away, becoming among the fiercest critics of test-based evaluations.

Districts also began creating new tests for the purpose of teacher evaluation, which led to concerns about over testing and helped drive a small but growing number of families across the country to opt out of state assessments. Duncan and Obama recently promised to help reduce over testing, but it’s unclear if their plans will actually do so. With the new federal law, states will have more flexibility to reduce testing on their own.

The testing backlash fueled a backlash to the Common Core, and vice versa. The standards, led by the National Governors Association and adopted by most states, were also supported with federal funds through Race to the Top. Many conservatives opposed the program because of that federal involvement, as well as substantive concerns about the standards’ quality. A slew of conspiracy theories and half truths also cropped up. Duncan would apologize for saying that much of the opposition to the Common Core had been driven by “white suburban moms.” Teachers unions, initially a key supporter, began to distance themselves from the standards as they became associated with testing, including two federally funded consortia of Common Core–aligned assessments to be used across states.

The vast majority of states continue to use at least some version of the Common Core, but far fewer remain a part of one of the testing consortia.

While Duncan’s supporters will point to rising high school graduation rates, and his opponents to a recent dip in national test scores, it’s too soon to fully assess the effect of his policies.1 The evidence that exists now is a mixed bag, though there are several noteworthy data points that capture the larger impact of Duncan’s policies.

On teacher evaluations, most states’ systems have rated the vast majority of teachers good or great, undermining Duncan’s goal of rewarding excellent teachers and helping or dismissing ineffective ones. On the other hand, there is indeed evidence that the process of evaluation itself may help teachers improve. A recent study also found small, but statistically significant benefits of a Department of Education–backed performance pay initiative, though the program was plagued by implementation challenges.

Duncan has pushed for the expansion of charter schools, which on average perform no better than traditional public schools on standardized tests, but appear to be improving over time and are notably effective in many urban areas, particularly for low-income minority students.

Contrary to conventional wisdom, Duncan’s school turnaround initiative produced measurable gains in student achievement in some regions. A more comprehensive study will be released next year.

The effects of Common Core will be difficult to assess. One study found the standards may have improved test scores in Kentucky, an early adopter. Another study showed that states with strong implementation of the standards experienced slightly higher achievement gains than states that didn’t adopt Common Core. Both studies, though, have a difficult time isolating the effect of the standards, and should be taken with a grain of salt. Common Core’s  impacts on math (e.g. explanation beyond traditional algorithms) and reading (e.g. more non-fiction texts) instruction will continue to be hotly debated.

Like Duncan’s legacy as a whole, it will take much more time and research to understand the full effects of Common Core.

After Duncan, and ESSA, returning education to the states

Duncan’s tenure will end in just a few days, and a new era of national education policy will begin. As Harvard professor Martin West told Politico, “It's an incredibly significant development that this is the first reauthorization [of the Elementary and Secondary Education Act] since at least the 1980s — but arguably dating all the way back to its inception — where you see a rollback of federal involvement as opposed to further extension.”

In more ways than one, it marks the end of the Duncan era.

Conservatives worried that Duncan’s use of Race to the Top and waivers would lead to a federal takeover of education. Ironically, in fueling the backlash that drove politicians towards a weaker federal law , it’s done just the opposite. School accountability has been scaled back and Department of Education is now prohibited from influencing teacher evaluation or pushing common standards.

In other words, Duncan heads for the exit just as his Department is being stripped of many of its powers. The next president will have limited ability to either advance or retreat from the school reforms that Duncan advocated, fought for and successfully implemented.

Will the work Duncan set in motion endure? That’s now up to the states. And there are no longer carrots or sticks pushing them in one direction.

1. Moreover, it’s inappropriate to use national trends, such as test scores or graduation rates, to judge policies or policymakers, because without more careful analysis it’s impossible to isolate effects of specifics policies on aggregate data. (Return to story)