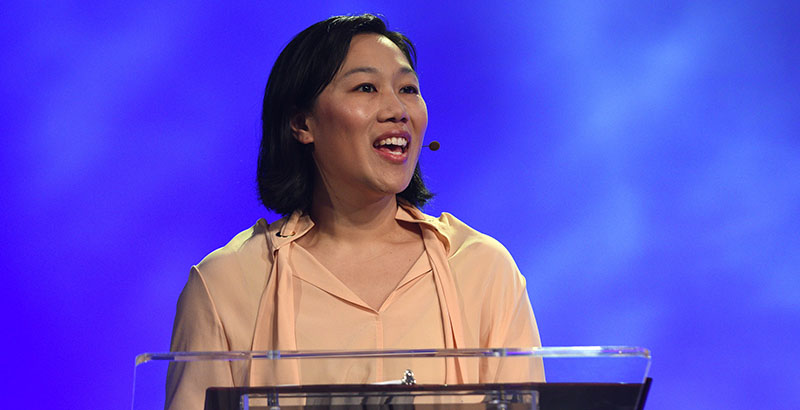 Priscilla Chan distinctly remembers feeling like she didn’t belong as a child, shouldering the weight of her immigrant family’s future while also finding bright spots in those teachers who encouraged her and saw her gifts.

“My parents came to the U.S. as refugees from Vietnam. They had almost no English skills or money. Growing up, my first job was to be a translator for my family at age 6. As a teenager, my job was working the front desk at the restaurant they were eventually able to open.

“Always, always, I knew that I was an outsider. Kids bullied me. I worried constantly that my family might not have enough money to get by. I know that in so many ways, I was also fortunate. I could see a doctor when I got sick. I went to good public schools. I had teachers, like Mr. Long and Mr. Swanson, who really cared about me and showed me how I could succeed — in class, on the tennis court, in robotics club.

“When they first came to this country, my parents couldn’t possibly have imagined that their daughter would one day go to Harvard. Or stand on a stage like this one.”

That stage for Chan, co-founder and co-CEO of the Chan Zuckerberg Initiative, was in a huge hotel ballroom at the ASU GSV Summit in San Diego last week. The massive education and workforce innovation gathering, now in its 10th year, attracted more than 4,700 attendees.

Chan, wife of Facebook founder Mark Zuckerberg, was there to announce a multimillion-dollar higher education grant while also talking about how her personal history shaped the education strategies at CZI.

The supports she experienced growing up aren’t available to most low-income students, said Chan, a pediatrician and former teacher. Hence the whole-child educational approach taken by CZI, a strategy that goes far beyond the fundamentals of reading and writing.

To demonstrate the possibilities, in 2016 Chan started The Primary School in high-poverty East Palo Alto, where teachers, pediatricians and mental health professionals attempt to look after all the needs of the children. The school is now supported by CZI.

At the conference, Chan also announced a $6.9 million CZI grant to two University of California campuses, San Diego and Berkeley, to bring the Meyerhoff Scholars Program to those campuses. That program, developed at the University of Maryland, Baltimore County, is designed to support underrepresented students pursuing degrees in the sciences.

In between her speech and university grant announcement, I was able to sit down with Chan to discuss CZI’s work and philosophy:

What do we miss out on by having relatively few minority scientists?

If we want to build a future that includes everyone, we need to make sure that people from all different backgrounds are included. For me, that means folks who have lived different lives, from different minority backgrounds, to participate in building that future.

Can you be more specific — let’s say, about what that means in your field of medicine?

In medicine, you miss out on being able to understand the cultural context of the lives people live.

A basic example: If you have never visited a low-income housing project, you wouldn’t know what it means for someone in a wheelchair needing to take a bus to a city hospital. You need to understand what that is like, to have empathy when someone is 30 minutes late for their doctor’s appointment.

You started a school in East Palo Alto three years ago. What’s happening there that is likely to lure more students into the sciences?

One thing we’re doing at Primary School is driving project-based learning. These are young kids, 3, 4 and 5, and we allow them to ask questions, to realize their curiosity, to know that their voice is important.

Your Child’s Education, Explained: What the Heck Is ‘Project-Based Learning’ Anyway?

CZI funds Summit Learning, a pioneer in personalized learning, which is also very project-oriented. How does that style of instruction encourage more students to study STEM subjects?

One thing important is to understand the why — why learning biology is important, or why this math class is important. To be totally honest, in isolation math and science can feel kind of dry. But what’s really exciting is how it can capture your imagination when you realize how it affects things you care about, such as animals or how to build something, or human lives. That’s the part that’s exciting. We often miss the spark of the application of STEM.

How will you know that the personalized learning at Summit is succeeding? Is the measurement earning college degrees?

College completion is a proxy of what we’re really looking for in personalized learning, the whole child. It’s really about understanding purpose and fulfillment … to living a fulfilled, purposeful life.

Why is a college degree a proxy? The question is whether you have the resilience, the grit, the ability to develop relationships and ask for help. Because if you have those things, you are likely to graduate from college. That’s something we learned from the first phase of ed reform — just making sure math and reading are in place isn’t actually going to drive success later in life.

How do you know if you’re making progress in educating the whole child?

At CZI, that’s part of our education strategy. Right now, the only thing we know how to measure are math and reading scores. It’s as if, when looking at a country’s well-being, all we knew how to measure was GDP. What about all the other things?

Right now, if you walk into a classroom, you might say you feel [positive learning]. That’s OK, but we should have better measures of what that looks like, and we want to know if we are on track. Plus, if you can measure something, we can actually motivate people. That’s what we’re doing in our grant-making portfolio with whole children, that it’s more than just a warm fuzzy feeling when you walk into that great classroom.

The early graduates from Uncommon Schools in Newark, who intended to major in science, often got overwhelmed in freshman-year science labs, which led Uncommon to retool their high school science classes. How will the Meyerhoff program help with challenges like that?

There a couple things that can be done, and that’s partially why I am so excited by Meyerhoff coming to San Diego and Berkeley. Sometimes, there are practical tactics: What class am I supposed to sign up for, where do I ask for help? There’s just some brass-tacks things that a lot of first-generation students, like myself, just don’t know.

Also, are there people like me here, do I fit in in this space, how do I actually succeed? What does success even look like? That’s on the mentorship side, to be able to have peer groups of folks just a little older than you, to be able to see, “Oh, they are doing it. I understand.” And then to have more senior faculty to be able to say, “I believe in you; you are right for this.” The tactical side and inspirational part need to come together. And oftentimes, the exciting thing about the Meyerhoff program is that your peer group can supply both of those. That is something we need to increase access to.

WATCH: Why America Needs a ‘B.A. Breakthrough’ — and How Ending Diploma Disparities Could Become the Most Effective Anti-Poverty Program in History

Education writer Richard Whitmire is the author of the just-released The B.A. Breakthrough: How Ending Diploma Disparities Can Change the Face of America.