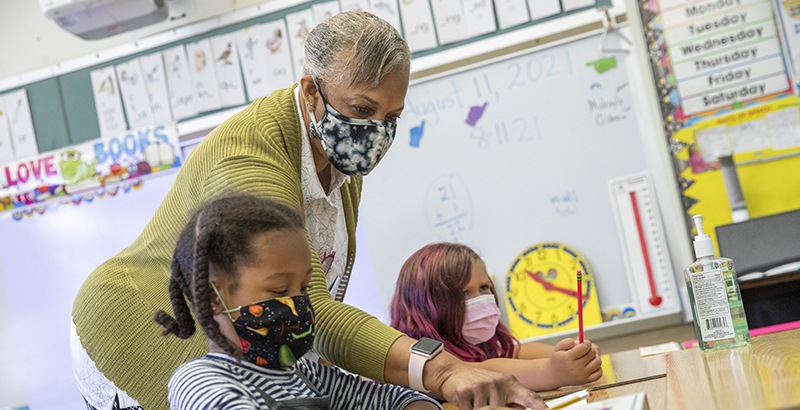 The leaders of the two national teachers unions signaled a change of heart when it came to requiring COVID-19 vaccinations for school employees. Although their newfound vaccination advocacy had a number of qualifications, it did prompt many previously reluctant state and local unions to follow suit. Governors and school superintendents interpreted these statements of support as an “all clear” to institute vaccine mandates.

But unions, like most large bureaucratic organizations, are like oil tankers. They don’t turn on a dime, and it’s clear that many affiliates were unprepared for the shift in direction, or were unwilling to go along for the ride.

According to a survey by the Center on Reinventing Public Education, as of Aug. 13, only 13 of the 100 largest school districts in the nation required teachers to be vaccinated, but the number is steadily growing.

“The unions are in a difficult position,” wrote Time reporter Charlotte Alter. “The national unions’ hesitance to embrace vaccine mandates has hurt their reputation on a national scale and angered parents fearing for their children’s safety, yet they are reluctant to do anything that might hamper the local unions’ bargaining power.”

That’s it in a nutshell, and it has been obvious from the earliest days of the pandemic. Back in May 2020, the California Teachers Association was already issuing bargaining advisories to its local affiliates, recommending that they “ensure they have proposals to get something in exchange for concessions.”

While parents and students were struggling mightily with online learning, the union was telling its locals, “Now is the time to secure language improvements that we have wanted for some time.”

If I understand the current positions of the national teachers unions correctly, they support universal mask mandates and strongly urge vaccination of both staff and eligible students, with mandatory testing for the unvaccinated. Who should be exempted from those requirements is a matter to be left to local collective bargaining.

These are perfectly defensible positions. The problem is the “collective” part. It doesn’t take much digging to discover that there is substantial, and organized, resistance among union members for every one of these measures.

I’ve previously reported on the opposition to vaccine mandates by the presidents of the Hawaii State Teachers Association and the Spokane Education Association in Washington. There are more.

“When you actually talk to the people this is affecting, it’s not political. It’s fear-based. They just feel really strongly about this. So the way to get around that isn’t to threaten somebody’s job, that’s not going to help,” said Jamie Fleming, a spokesperson for Teamsters Local 174.

The Michigan Education Association announced its support for testing and masks but opposes vaccine mandates. “Our members are vaccinated over 90 percent right now, according to our records, and so we believe a mandate right now is not necessary because so many of our educators were so proactive,” said Vice President Chandra Madaferri.

On her first day in office, New York Gov. Kathy Hochul announced her plan to “pursue options to mandate vaccines for school employees or require weekly testing in the absence of vaccines.”

“We support universal mask wearing as part of a layered mitigation strategy that also includes robust COVID testing, contact tracing, proper ventilation and other strategies recommended by public health experts,” responded New York State United Teachers President Andy Pallotta. “We also support the governor’s move to require regular COVID testing for school staff who are not yet vaccinated. It’s critical that educators continue to have a voice in the implementation of vaccine requirements and other COVID policies at the local level.”

The statement noticeably omitted support for a vaccine requirement.

“While the city is asserting its legal authority to establish this mandate, there are many implementation details, including provisions for medical exceptions, that by law must be negotiated with the UFT and other unions, and if necessary, resolved by arbitration,” he said.

Even if Mulgrew climbs aboard, he faces pushback from some of his own members, who organized a rally against any vaccine mandate. Similar qualms exist in Chicago.

There may be reluctance to vaccinate, but surely union member support for masking is universal? Not so.

In Billings, Montana, the school superintendent issued a memo that instituted a mask mandate for all students, staff and visitors, stating that failure to comply would be “unacceptable insubordination and the employee will be disciplined.”

The Billings Education Association called the memo “inappropriate and insulting,” saying it had a memorandum of agreement with the district that encouraged masks but did not mandate them.

Over in Trenton, New Jersey, the “Freedom Loving Teachers of NJ” Facebook group organized a rally to protest both mask and vaccine mandates.

So what happens when these issues reach collective bargaining? In many places, things will go smoothly. Unions and districts will reach agreements that reflect the needs and desires of all parties involved. In other places, it will be a long and costly battle.

Whenever you issue a blanket requirement for anything, you have to account for exceptions. COVID vaccinations are no different.

“We are calling for districts and employers to work directly with educators and their unions to address the complexities of vaccinations and accommodations that will need to be made for educators,” said NEA President Becky Pringle.

There is no reason to think that establishing those accommodations will be easy or that they will be consistently applied. The Washington Education Association said questions about exemptions are “flooding in.”

In Connecticut, the governor issued a vaccine mandate and requires all school employees to submit proof of vaccination. He allowed school administrators to evaluate exemptions on a case-by-case basis.

“Those are the kinds of words that, frankly, pay your lawyers’ mortgages,” said Mark Sommaruga, an attorney who works with school districts on vaccine policy.

The problem is that collective bargaining by school employees unions is ill-suited to determine the most effective public health policies. It is indisputable that some people cannot or should not receive the COVID vaccine. Should those people, along with any other employees who are exempted through negotiations, be allowed in close indoor contact with unvaccinated children and other employees?

No matter your answer to that question, there will be many places where unvaccinated employees will return to in-person work, even with a vaccine mandate. So it will come down to each individual’s level of risk tolerance, for both themselves and their children. No memorandum of agreement will override it.

Submit a Letter to the Editor
September 1, 2021