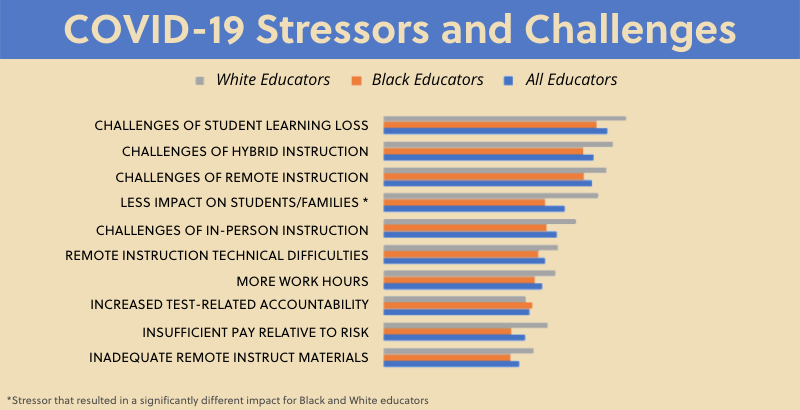 Teachers’ mental health is closely linked to how effective they feel in the classroom, a new study of New Orleans educators has found.

Student learning loss was the top stressor cited by the teachers, followed closely by challenges related to hybrid and remote instruction. Teachers also reported rates of emotional distress that were similar to or higher than those of health care workers.

The new report is the second survey of teacher mental health released since the start of the pandemic by the Trauma-Informed Schools Learning Collaborative, a joint endeavor of Tulane University, NOLA Public Schools, the New Orleans Health Department and a number of social service agencies. It is based on conversations with 171 educators held in June 2021, before it became clear COVID-19’s Delta variant — and now Omicron — would disrupt a third school year.

“Educators, like other first responders, have been called upon to go above and beyond to do their jobs and support students during the pandemic,” the report states. “Findings from the survey indicate that the mental health toll associated with this additional work is substantial and should not be overlooked by policymakers and school leaders as they plan for greater support and improved retention of educators moving forward.”

1. Educator mental health is tied to teachers’ feelings of efficacy. On a five-point scale measuring the impact of a stressor on participants’ ability to teach, learning loss was the most reported challenge, with an average score of 2.32. The fourth-highest reported factor, at 1.88, was having less impact on students and families.

Research on the relationship between teacher effectiveness and feelings of self-worth is scant, says social worker Teddy McGlynn-Wright, head of the initiative’s Training of Trainers effort. “But what we do know is that self-efficacy buffers against a lot of trauma impacts and burnout,” he says. “If teachers are feeling efficacious, if they feel like ‘I’m doing my job and doing it well,’ those are good signs in terms of their willingness to stay in the profession.”

2. More than a third of educators met the threshold for a diagnosis of depression or anxiety, with one in five exhibiting significant symptoms of posttraumatic stress disorder. By way of comparison, a third of health care workers qualify for an anxiety diagnosis, 17 percent for depression and 14 percent for PTSD.

“We caution against … assumptions about Black educators’ innate ‘toughness,’ which tends to reinforce racist stereotypes,” the report’s authors warned. “Rather, it is likely that Black teachers have developed this resilience as a necessary set of strategies to cope with the daily interpersonal and institutional impacts of racism.”

The researchers screened teachers for the number of pandemic-related stressors they have experienced, for symptoms of mental health problems and for the presence in their lives of elements thought to bolster emotional well-being, such as support from family and friends, work-life balance and faith-based resources. Educators who reported being affected by a larger number of stressors exhibited more symptoms of depression and anxiety, while those who cited more protective factors had fewer symptoms.

4. During distance learning, teachers were deprived of time together, such as shared lunches, coffees or happy hours. Even though most New Orleans schools returned to in-person classes, those opportunities for mutual support are rare now.

“Having peer support matters so much,” says McGlnn-Wright. “It’s one of the things that the pandemic has really taken away, because there’s just not as much time.”

Among several recommendations in the report for addressing teacher well-being is building time for peer-to-peer support into the work day. School leaders also should make sure educators know how to access mental health and wellness services, that health care benefits are generous enough that therapy and other supports are affordable, and that adequate leave is available.

5. Calls to address learning losses with more instructional time may seem justified by lagging test results, but many educators disagree. “There are not a lot of teachers who are banging that drum right now,” says McGlynn-Wright. “What they’re saying is most kids need to not be at the same desk for six hours. They actually need to get up, they need to move, they need to interact with other humans.

“Those are the things they need, but it’s much harder to make that claim when we don’t have this really simple, digestible data point.”