The following is from Linda Darling-Hammond and the Learning Policy Institute in response to questions for a story in The 74, raising questions about some of Darling-Hammond’s research and public statements.

Statement from The 74: Challenges the “use of state-level NAEP data to suggest that New Orleans charter-based reforms are ineffective.” (p. 43)

Response from Dr. Darling-Hammond: We did not cite the study that used state-level NAEP data to draw inferences specifically about New Orleans, nor did we declare that the “New Orleans charter-based reforms are ineffective.” We noted the difficulty of creating a comparison group for New Orleans, given the changes in the population after the hurricane, and we reported the results of several studies, including those that, using different comparison groups, reported positive and negative conclusions about charter schools in New Orleans and Louisiana to conclude that the jury is out with respect to the overall achievement effects of the reform strategy in the state and city. Our conclusion to that section of the report states: “Thus, different studies using different kinds of comparison groups come to very different findings.” (p. 43)

Statement from The 74: Statement about testing: “What we see from a lot of research is that the kinds of standardized tests that we use [in the United States] predict very little about success later in life. They don't add anything really at all to predicting college success and nothing about life success." (statement around 7:30 in the video)

Response from Dr. Darling-Hammond: In the context of the speech, the statement was aimed at multiple-choice tests used to predict college success and later life success. Decades of studies have found that most such standardized tests, like the SAT and ACT, have less predictive value than course-taking and class rank for predicting college success. Examples include:

One of the studies cited by LPI does really address the question of whether multiple-choice standardized tests are good predictors.

Statement from The 74: Challenges the claim: “Federal policy under No Child Left Behind (NCLB) and the Department of Education's 'flexibility' waivers has sought to address this problem by beefing up testing policies—requiring more tests and upping the consequences for poor results, including denying diplomas to students, firing teachers, and closing schools. Unfortunately, this strategy hasn't worked. In fact, U.S. performance on the Program for International Student Assessment (PISA) declined in every subject area between 2000 and 2012— the years in which these policies have been in effect.” (Similar claims made here.)

Response from Dr. Darling-Hammond: The first statement is true—no raw data isolates the impact of a single policy, but it proves the point that if other factors—such as growing poverty, school funding disparities or other factors that are discussed in the EPI study—are responsible for the overall declines, policy should be addressing those factors to make a difference in overall performance. The authors of the EPI study do not claim that the federal NCLB was a successful policy. They draw attention to different strategies used by states when they evaluate differences across states. Their definition of accountability systems is a different definition than that used by NCLB. If the federal policy were successful, these cross-state differences would not matter and perhaps would not exist. In fact, the differences between states like New Jersey (which showed positive outcomes) and New York (which showed negative outcomes, relative to NJ), cited by these authors are not caused by high-stakes testing, as New York (the lower scorer) engages in much more extensive high-stakes testing than New Jersey.

The Loeb and Figlio study was referring to accountability strategies in the 1990s and early 2000s that preceded NCLB, which were more thoughtful than the NCLB approach (more focused on improvement, rather than sanctions, and more informed by performance-based assessments which many states used at that time) and produced stronger results, as noted above. NAEP gains were much greater in the decade before NCLB than in the decade after it had taken effect.

The first of these studies, by Thomas Dee, notes the gains in mathematics on NAEP, but does not note that these gains were about half as large as the gains that occurred in the decade which preceded NCLB. Dee and his co-authors do note that “we find no evidence that NCLB increased reading achievement in either 4th or 8th grade.” Further, a study by RAND found that PISA measures higher order skills to a much greater extent than NAEP does, especially in math.

The second study provides an interesting discussion of a proposed methodology but it doesn’t actually prove the point for which it is cited above. The third study focuses on a subset of schools deemed to be on the margin of failing AYP, not the overall education system.

Question about the description of alternative preparation programs as “substandard” and teachers who go through these routes are “underprepared.”

Response from Dr. Darling-Hammond: The term “substandard” is a straightforward description of how teachers are classified in the certification system. Those who hold less than full credentials because they have not met all of the state’s standards for a license are classified as holding substandard credentials or permits. Similarly, by definition, teachers who have not completed the preparation required for full certification are considered underprepared. By using these descriptive terms, we are not making a claim about effectiveness. However, there is also research demonstrating that less-than-fully-prepared teachers are less effective.

With respect to effectiveness of newly entering teachers and their influences on student achievement, the most productive comparison is not between veteran teachers who entered through different traditional routes, but rather between those who have not completed their preparation (whether through a traditional or an alternative route) and those who have. In many states, alternative route candidates, including those who enter through Teach for America (TFA) ultimately complete all the coursework for certification as traditionally prepared entrants, but they do so over one to two years, while teaching, depending on the state and the program. Various studies have contrasted the effectiveness of less-than-fully-prepared teachers, as measured by student achievement, with the results achieved by fully certified teachers. As a group, these studies have found that the students of teachers who have not had preparation or who have not completed their training programs (and may be enrolled in alternative routes to certification) do significantly less well in reading and math than students of new, fully certified teachers, with the negative effects usually most pronounced in elementary grades and in reading. Some of these studies are the ones cited by The 74 in support of the opposite claim. For example:

LPI Response: The actual quotation in LPI’s study, Addressing California’s Emerging Teacher Shortage, does not state that “combat pay” is ineffective. It also accurately represents the Talent Transfer Initiative results — and the broader finding about long-term retention impacts, from that 2013 study by the Institute of Education Sciences, “Transfer Incentives for High-Performing Teachers: Final Results from a Multisite Randomized Experiment.”

“Some policies have emphasized monetary bonuses or “combat pay” to attract teachers to high-need schools. However, the evidence shows that investments in professional working conditions and supports for teacher learning are more effective than offering bonuses for teachers to go to dysfunctional schools that are structured to remain that way… A more recent study of efforts to recruit high-performing teachers to struggling schools found that, among 1,500 such teachers in the Talent Transfer Initiative, only 22 percent were willing to apply to transfer to high-need schools for a two-year bonus of $20,000. Although the targeted teachers filled most of the 81 vacancies, attrition rates of these teachers soared to 40 percent after the bonuses were paid out.”

Every aspect of this quotation is supported with the data below from the Transfer Incentives study, as is the broader finding that such incentives do not provide long-term solutions to the problems, as their benefits had disappeared by year two of the program.

“To gauge the response of the candidates in the TTI, we examined the rates at which candidates took part in various phases of the process (“take-up rates”) from attending information sessions to completing an application, interviewing, and ultimately transferring. In Figure III.2, we provide a breakdown of the take-up rates by grade span and subject using TTI program records.” (p.34) 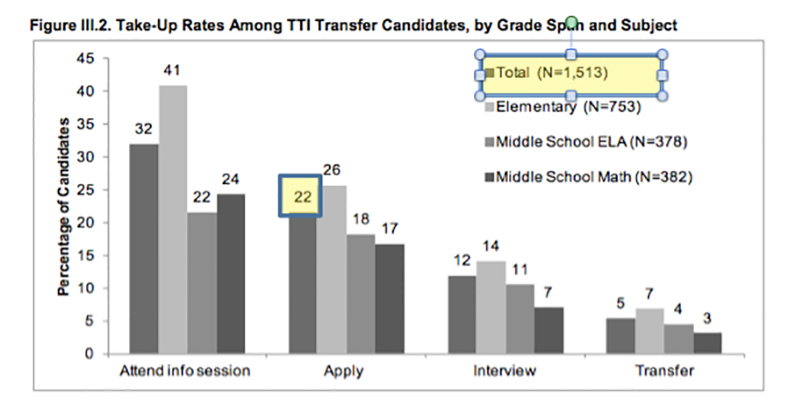 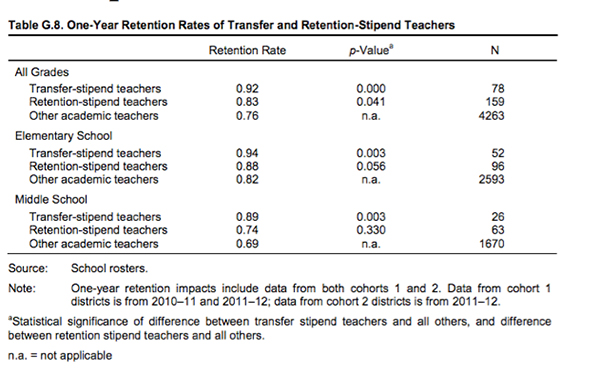 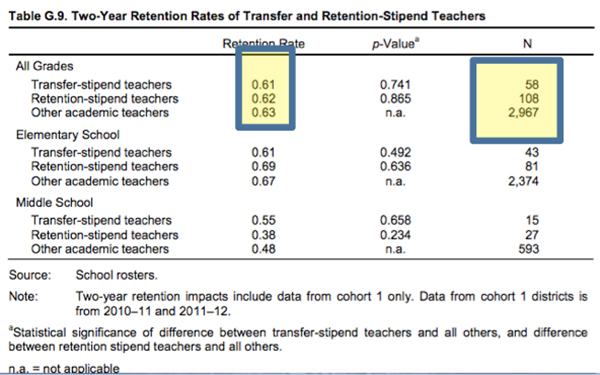 Teaching Conditions and Retention: The statement in LPI’s report that “evidence show[ing] that investments in professional working conditions and supports for teacher learning are more effective than offering bonuses for teachers to go to dysfunctional schools,” is supported, among others, by studies from Harvard’s Project on the Next Generation of Teachers, including: