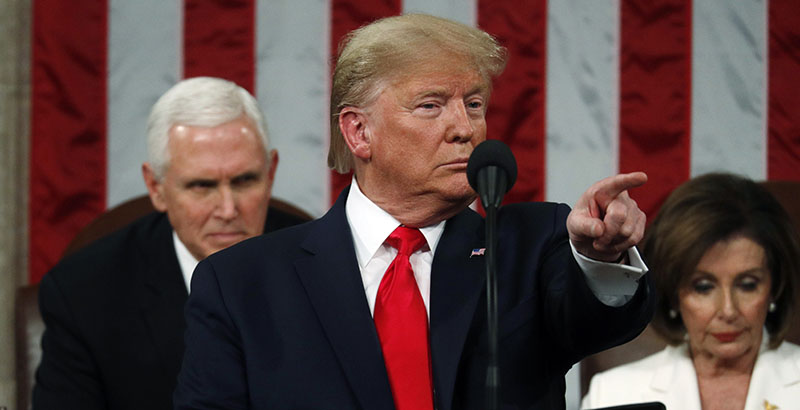 A good portion of the reaction to Tuesday night’s State of the Union was about a snubbed handshake and the tearing of a speech. Although in recent years the speech has certainly become a performative event full of partisan posturing, Tuesday night signaled a subtle yet substantial shift in the presidential approach to K-12 education policy: President Donald Trump indicated that his administration is more interested in incremental education measures than any administration in recent history.

In his speech, he laid out an approach to K-12 education policy that focuses on two key proposals: creating a federal tax-credit scholarship program and expanding career and technical education to every high school. These would help expand access to private schools and pathways to high-demand middle-skills careers, but they would also reach only a small sliver of America’s students. Trump’s proposed tax-credit scholarship program would reach less than 2 percent of the nation’s public school population, and 84 percent of public high schools already offer some form of CTE programming.

Under previous administrations, K-12 policy segments of the State of the Union tended to focus on how the federal government would broadly shape the operation of public school systems in America. While the range of K-12 policies promoted varied in their scale and scope, they all sought to leverage the power of the federal government to drive improvement in state and local education agencies. President Bill Clinton talked of standards, accountability, national assessments and how to catalyze charter school growth in his State of the Union speeches. George W. Bush emphasized efforts to raise standards and accountability at the state level, which ultimately culminated in the No Child Left Behind Act. Barack Obama referenced the influence of his Race to the Top program in driving states to adopt more rigorous standards (Common Core) and teacher evaluation systems.

These last two absolutely changed the operation of state education agencies, boards of education and public schools, and they certainly led to some improvements in student outcomes. But they also led to unintended consequences for states, districts and schools. These top-down school reform efforts created bureaucratic challenges that affected every public school in the country. States built accountability systems under NCLB that eventually fell apart as annual yearly progress targets ratcheted to higher and higher performance levels. This ultimately led to states getting more flexibility and designing new accountability systems under the Every Student Succeeds Act. States designed and implemented teacher evaluation systems as part of their Race to the Top plans, but the complexity and technical challenges of quantifying teacher impact on student outcomes led many of these systems to atrophy.

Setting aside the pros and cons of these policy paths, Trump’s narrowed scope of presidential ambition for education policy is a clear break from the trend of the past several decades. It is a tacit acknowledgement of a theme Rick Hess, the American Enterprise Institute’s director of education policy studies, has hit on for years: “while Washington can force states and districts to do things, it cannot make them do those things well.”

To be sure, I don’t think Trump was laying out any intentional philosophical approaches Tuesday night, particularly in a venue that is more about symbolic pageantry than substantive policy. But his proposals highlight a key question that education policy wonks on the left and right have grappled with for years: Will children be better served by broad or targeted federal education policies?

Trump stands in clear contrast to many of his presumptive 2020 opponents, who have broader proposals for K-12 education policy and an “I have a plan for that” instinct. In the education policy community, our focus ought to remain on identifying a path — broad or narrow — that can effectively translate federal policy change into better outcomes for kids.

Alex Spurrier is a senior analyst with Bellwether Education Partners in the policy and evaluation practice area.

Alex Spurrier is a senior analyst with Bellwether Education Partners in the policy and evaluation practice area.