The students pile into inflatable rafts at the rocky shore of Kelleys Island, one of a series of islands off the coast of Lake Erie in Ohio.

Joining them in the raft is a contraption made of PVC pipe and propellers holding an underwater camera.

If the two dozen teens achieve their ultimate goal of their summer Shipwreck Camp — finding either of two cargo ships that sank just a few hundred yards offshore around 1900 — the Remotely Operated Vehicle (ROV) will maneuver around the lake bottom to take video of whatever of the ships remain .

“All right, I’m pushing you,” said teacher Jason Bosch as he guides a raft to waist-deep water before setting the students off. “Bye!,” a student calls out as the boat drifts further out.

For two intense weeks each July, the camp through Case Western Reserve University immerses students aged 12 to 16 in the world of shipwrecks and how to explore them. Leading up to the trip to the lake, students learned how waves work, had a taste of scuba diving, learned about searching for debris and artifacts; and worked in teams to build several ROVs they hope to guide around remnants of the ships. 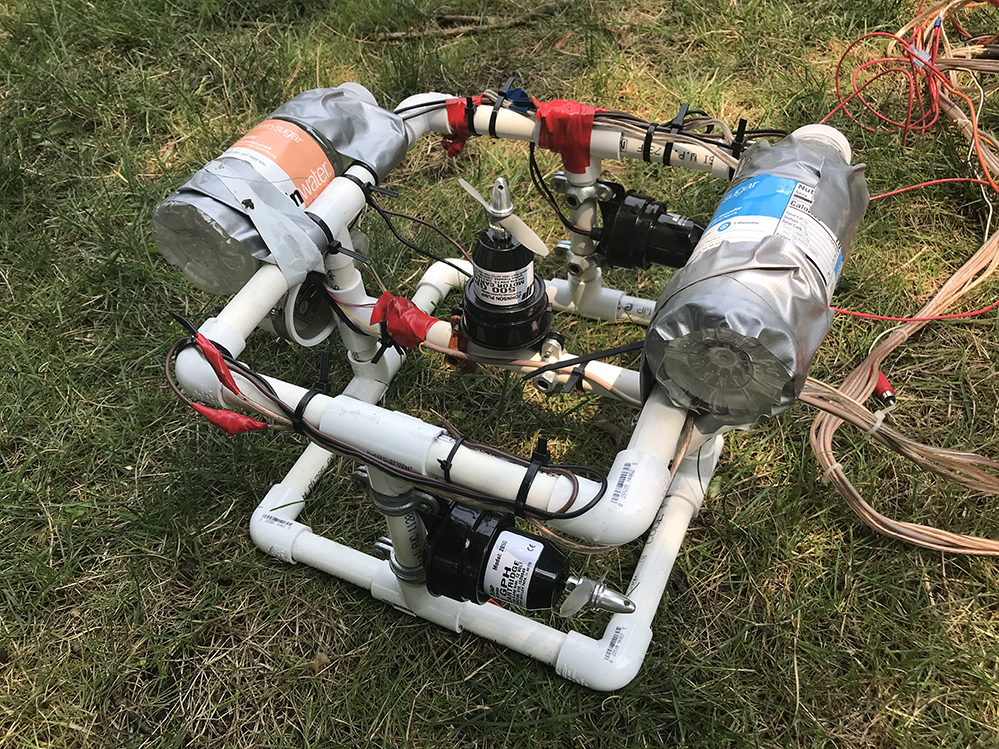 One of the ROVs students at Shipwreck Camp made to try to film either of two ships sunk in Lake Erie off Kelleys Island. (Patrick O’Donnell)

“Shipwreck camp is a thinly veiled exposure to Great Lakes science and technology,” said James Bader, executive director of the Gelfand STEM Center that runs the camp. “We don’t hide it very well.”

Both sank just a few hundred yards apart off Kelleys Island, a little over four square miles and about four miles from the Lake Erie shore. A total of nine ships are known to have sunk around the island. 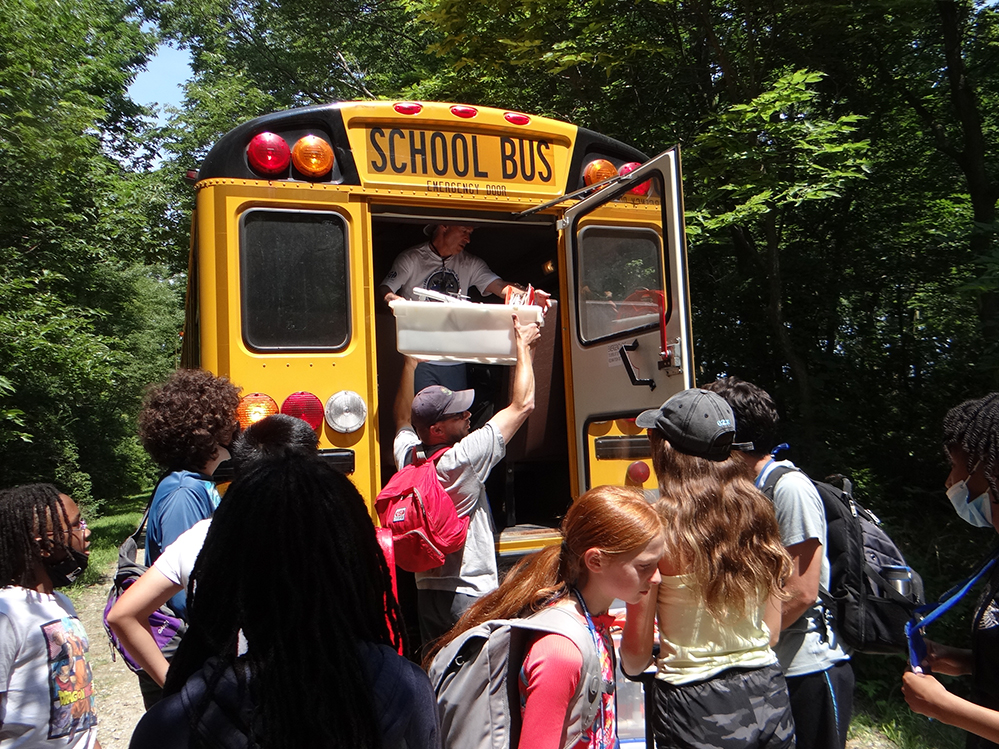 Students help unload rafts, cameras and other equipment from their bus after taking a ferry to Kelleys Island to look for two sunken ships. (Patrick O’Donnell)

But the search, even this close to shore, could be difficult and unsuccessful, even with GPS coordinates of the well-researched wrecks.

“Even on the best day, I really don’t know how visible the wrecks are,” Bader said. “So I don’t know what their chances are.”

“There’s not a whole lot left of either wreck,” he said, “And who knows what’s happened in the last year with silt and sediment. It’s a true adventure.”

When most people think of shipwrecks they think of ships lost at sea, but rarely on the Great Lakes — unless you live near them. Ships hauling coal and ore and iron across the lakes were key to the area being an industrial powerhouse around the turn of the 20th Century and for decades into it.

Weather can be rough enough to take ships down, even on the lakes, and some are even famous inspiration of song, like the 1975 sinking on Lake Superior of the freighter Edmund Fitzgerald.

There’s even a Great Lakes Shipwreck Museum in northern Michigan, where researchers estimate that about 6,000 shipwrecks in the Great Lakes have resulted in the deaths of about 30,000 sailors. Several websites list locations of wrecks, with maps and details about the dates, cargo and causes of each. 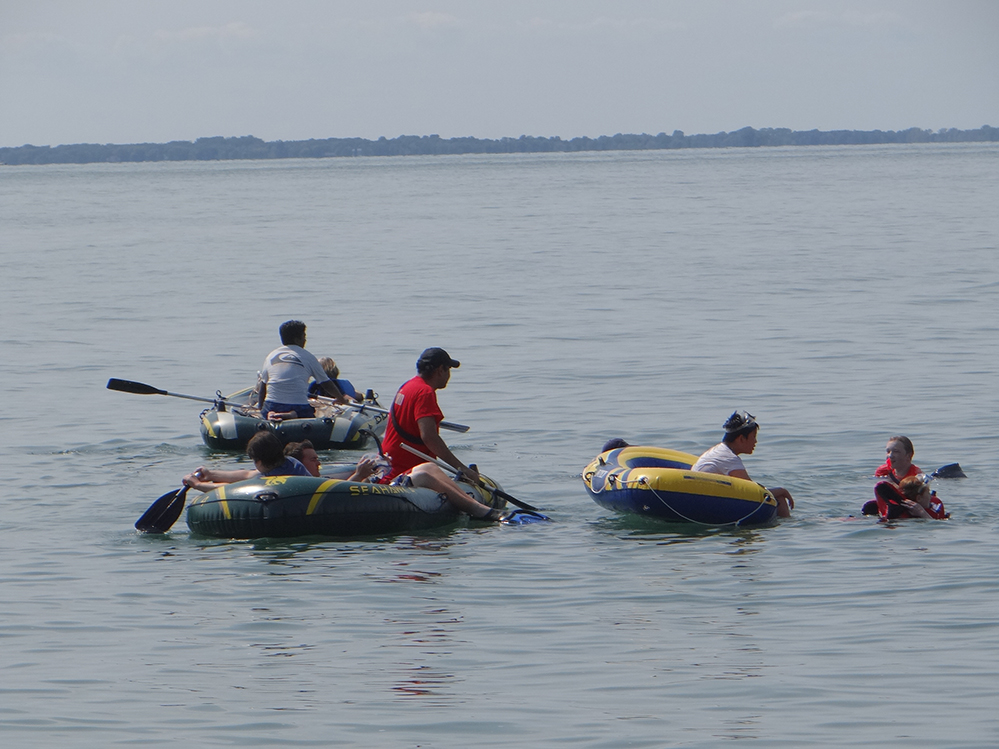 Students maneuver rafts to the GPS coordinates of the sunken scow W.R. Hanna while others look underwater to find it. (Patrick O’Donnell)

For Bader, the wrecks provide a great hook to draw students into learning science, so he started the camp 10 years ago, missing a year only because of COVID.

Students learn about navigation, how to use GPS systems, meet researchers and read and discuss the book “Shackleton’s Stowaway” by Victoria McKernan, about an attempt to sail across Antarctica in 1914 in which the boat was trapped in ice and the crew struggled to survive.

A few days before traveling to Kelleys Island, camp instructor Jack Klein, a science teacher at the private Gilmour Academy near Cleveland, had students outside a campus building testing how the size of waves can change in long tanks of water. 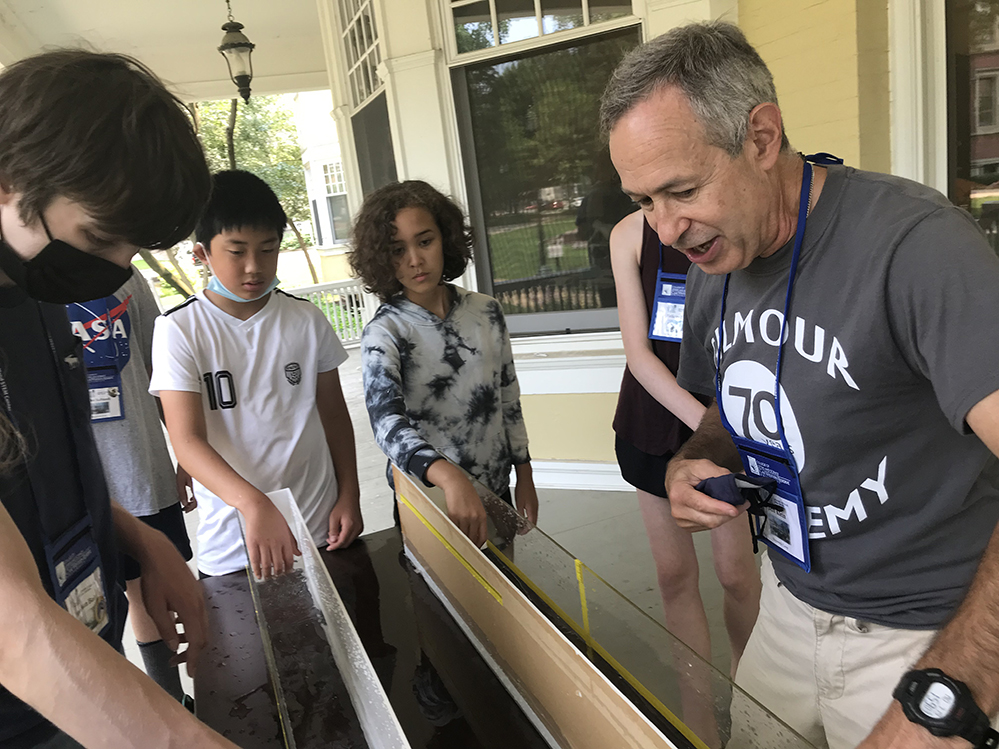 Teacher Jack Klein talks to students about how waves can change size as part of Shipwreck Camp on the campus of Case Western Reserve University. (Patrick O’Donnell)

He also had pairs of students hold the ends of long, thin metal coils and ripple them in the air to see how the size of the ripples can change depending on how well the students coordinate their flicks,

“What it’s doing is one wave builds on another.” he said, asking, “What happens when you pump your legs just at the right time?”

“You go higher,” one student said.

A few feet away, Bosch, a science teacher in Vermilion, a community 40 miles west of Cleveland, watches as students use string and sticks to create a grid over a sandbox with items — “artifacts” — scattered inside. Creating such grids is a standard way researchers can document how items are spread out in a field of debris they search.

Students then headed inside the STEM center, where bins of wires, PVC cameras and frames fill two giant rooms, and where they solder wires or use duct tape to fortify their camera-carrying vehicles – box outlines of PVC with a camera suspended inside.

Students will test the ROVs and how they work, then improve them, in a reflecting pond nearby before taking them out to the island for the final mission. 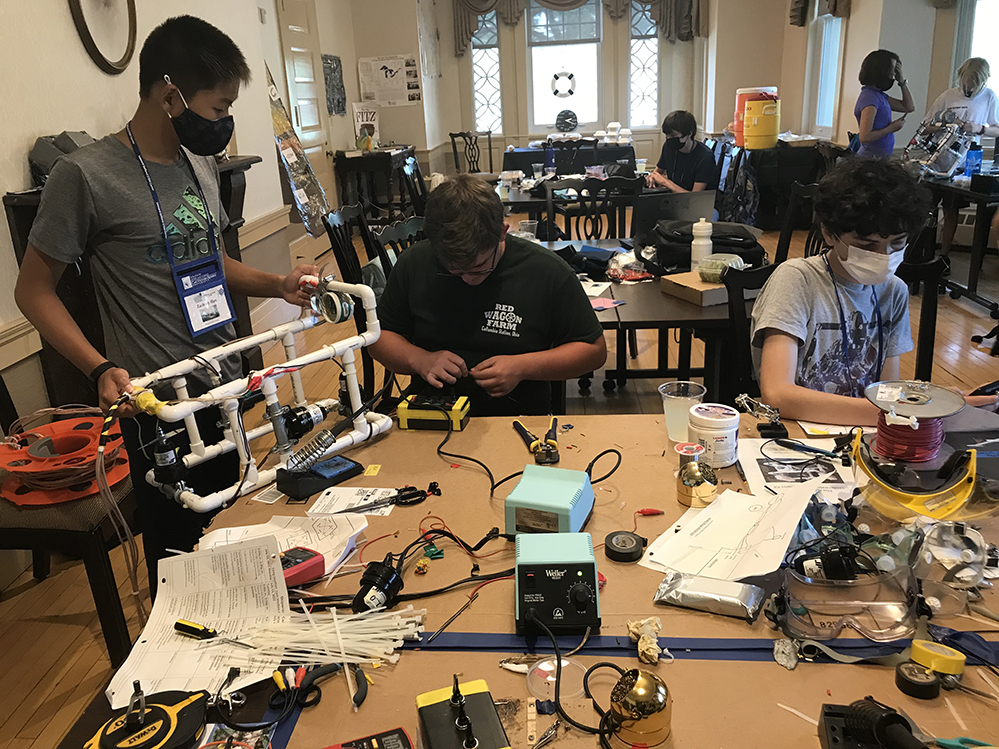 Shipwreck Camp students piece together ROVs to carry cameras underwater or solder together wires for the motors powering propellers on their contraptions. (Patrick O’Donnell)

The mission has challenges, though. The team has GPS coordinates, but no SCUBA divers or sonar. Only portions of the ships remain. And silt is a regular issue for shipwreck aficionados, who often have to probe sand with metal poles to find wreckage even when wearing SCUBA gear.

The students have just face masks and snorkels to search for wreckage eight to 10 feet down, a little more than the deep end of a typical pool, but likely more given recent rains. 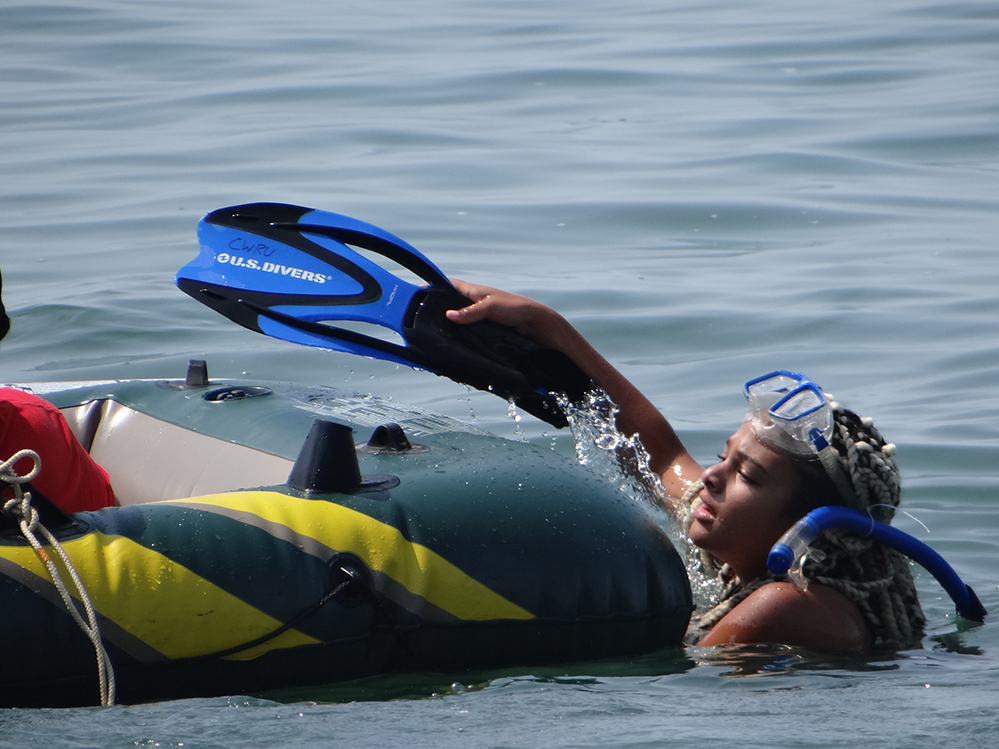 But they try. The strongest swimmers and divers jump off the rafts and scan the bottom as best they can, diving as deep as they can. They just can’t find much. Jonathan Bala, 14, of Cleveland, thought he saw some wood along the bottom.

“I’m not sure if that was the main wreck or just some planks that had been dislocated earlier,” he said.

Zack Han, 14, of Solon, a Cleveland suburb, also dove at the coordinates of one of the ships and saw little.

“It’s mostly just rocks and there are parts (of the bottom) with just sea grass,” he said.

For others, just trying was a big step.

“It was a little scary, mostly because I’m scared of water a little bit and I have asthma,” said Enya Blue, 14, of Cleveland.

Only a couple of the cameras the kids worked on went underwater to look, but also found little. A false report of finding pieces raised hopes, but were unfounded and the day was running out before students had to catch a ferry home.

Just before the students had to leave, divers in the area found the Adventure and a couple students dove quickly for a fleeting look.Most saw nothing, offering a lesson in how search operations for real scientists can come up short and how science and exploration can be all about trial and error.

Blue and other students still liked the camp because they could be out on the water and because they learned new things.

Blue said she liked making the ROVs to carry the cameras. Creating them on their own and testing them and seeing them working also was rewarding. And she knows the search sometimes succeeds. She did the camp in 2019 and a search for another ship at another location worked.

Han had mixed feelings after not finding either ship.

“It doesn’t really feel good,” he said, as he dried off. “But we did scuba diving and that was really fun.”