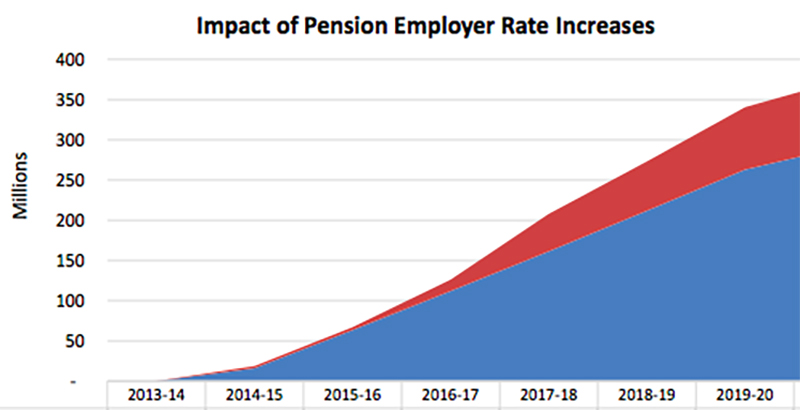 The financial state of the nation’s second-largest school district in Los Angeles can be convoluted and complex. But it’s important to read up, as the conversation on how much money the district has continues to swap out facts for politics, education expert Robin Lake said.

Lake, director of the Center on Reinventing Public Education, resurfaced a 2015 independent finance report commissioned by former L.A. Unified superintendent Ramón Cortines, summarizing its findings in a tweet string. The nonpartisan report attributed L.A. Unified’s money troubles to factors including “a significant structural deficit,” California’s low (albeit disputed) rank nationally in per-pupil funding, ballooning health care and pension costs, a disproportionate number of administrators, and declining student enrollment due not only to charters — which are increasingly being blamed for traditional public schools’ plight — but also birth rate declines, dropouts and transfers out of the district.

“If people are going to be weighing in … I think there’s a responsibility to take a look at what the facts are,” said Lake, who tweeted on the report during January’s teacher strike. “People have been pretty quick to point fingers.”

Though there has been “a long string of reports” on L.A. Unified’s finances, the 2015 report is reputable because the commission that produced it was “much more” nonpartisan and is not tied to the district’s current superintendent, Charles Kerchner, professor emeritus at Claremont Graduate University, told LA School Report in an email earlier this year. Superintendent Austin Beutner is a former businessman who was frequently disparaged by United Teachers Los Angeles before and during January’s teacher strike.

The district’s updated budget and fiscal stabilization plan, unveiled last month, highlighted L.A. Unified’s deepening reliance on new funding — especially after it approved a new teacher contract in January that adds $840 million to its bills through 2021. Although L.A. Unified ended this past school year with a record nearly $2 billion in reserves, projections show that cushion near depletion by 2021. Without new funding, the district would be at risk of a county takeover. Officials are currently banking on a parcel tax on the ballot in June, and increased state funding, to help the district stay afloat in the coming years.

“I have a lot of sympathy for paying teachers what they’re worth, and teachers have hard jobs. I don’t want to dismiss that reality,” Lake said. “But it’s a common tactic for districts to take the politically expedient route of settling a contract with numbers they can’t afford. … And ultimately, kids will pay the price for it.”

Some facts about the cause of LAUSD’s financial woes straight from a 2015 independent financial review. (note how many recommendations were not acted upon). Sorry, this is long, but that reflects the complexity of the root causes. @capriceyoung @MichaelPetrilli @arotherham

All large urban school systems have unique issues, but they are magnified in Los Angeles because the District must deal with these issues while laboring under California’s school financial system, which still provides among the lowest per-student funding amounts in the nation.

Much of the volatility is related to past, present & future declining enrollment, high costs for employee benefits, sp ed services, and retiree benefits. But the vagaries of the economy and trends in state and federal requirements and funding levels are also significant factors.

It must be recognized that there is no one cause for the decline in the District’s enrollment, but rather it is the culmination of various factors, some within and some outside, of the District’s control.

The District must make every effort to attract and retain students and parents by offering high-quality schools, but also must not put off difficult financial decisions by making unrealistic assumptions about future enrollment.

Even if LAUSD had no more new charter schools, its enrollment would continue to decline due to demographic factors, factors that are not within its
control, and that are unlikely to reverse in the coming years.

The District has not reduced staff commensurate with loss of enrollment
and, in fact, had experienced higher salary costs because of both salary and benefit increases and increases in staff.

More than 56% of District teachers have reached the maximum salary level, 10% above the average for the state. pic.twitter.com/5vfsumtEPr

Currently, 75% of staff has a strong attendance.  If 25% of school site staff are missing 5% or more of their work during the school year, the loss of instruction time and productivity, and the expense of finding substitute labor, is deeply troubling.

Of the $9,788 in over ADA revenues received from the state, fully 27% of that payment goes to cover pension and healthcare costs, according to the CDE. Per FTE, the District’s expenditures for benefits is 9.4% higher than the statewide average.

I could go on, but obviously, the reasons for LAUSD’s financial mess are complex. Anyone trying to simplify to one cause is mistaken or intentionally spinning. Here’s the report https://t.co/ACvG30N5fb

For more about how L.A. Unified could pay for the contract, read our latest article:

The L.A. teacher strike may be over, but observers warn there’s no ‘clear path forward’ for how the school district can afford its new contract

And here are some of our previous articles on the district’s finances:

Experts: Crippling long-term debt isn’t leaving L.A. schools much wiggle room to avert a teacher strike — and may doom the district to takeover

LAUSD could lose control of its finances if it agrees to a teachers contract that depletes reserves, county warns

LAUSD’s plan to stave off financial ruin and a potential county takeover: Cut 15 percent of central office staff and save $86 million