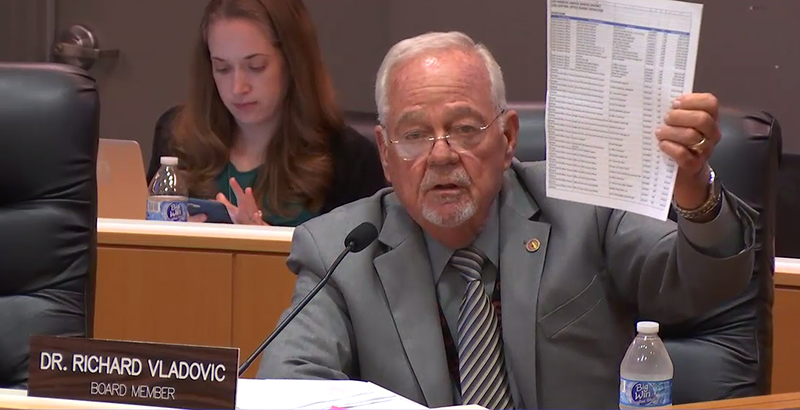 School board member Richard Vladovic speaks on L.A. Unified's budget at a board meeting in Los Angeles on March 19.

School board members have approved L.A. Unified’s latest budget, even though the district is still far from being financially sustainable.

The revised fiscal stabilization plan lays out the district’s response to county concerns about deficit spending, inadequate reserve levels and reliance on non-guaranteed funds to keep itself afloat in coming years. But instead of providing clarity, the latest budget highlighted the district’s deepening reliance on new funding sources as it struggles to correct its ballooning deficit and to meet future minimum reserve requirements that could shield it from a county takeover.

The plan, presented to the board on Tuesday, offered the first in-depth look at L.A. Unified’s budget since the district settled its new teachers contract in January. That contract came with an $840 million price tag through 2021, stemming largely from teacher salary raises, class size reductions and support staff hires, such as counselors and nurses.

The fiscal plan passed 4-1, with one abstention, and was sent to county overseers by Tuesday’s deadline for review. The county has until April 15 to provide a response, a spokeswoman confirmed Wednesday.

Beyond already-announced reductions to the central office, Tuesday’s report outlined few other guaranteed cost cuts. Rather, Chief Financial Officer Scott Price emphasized to the school board that “we need to increase revenues.” L.A. Unified continues to bank on projected new state revenue and local initiatives like a parcel tax — which will be on the ballot this June and which just received backing from the L.A. City Council — to breathe life into the budget.

“I would like to know the amount coming from the governor. I’d like to know the results of the parcel tax” before giving approval, said District 3 board member Scott Schmerelson, who cast the sole “no” vote. District 1’s George McKenna chose to abstain.

Price’s presentation Tuesday highlighted the frustratingly volatile nature of budgets, District 7 board member Richard Vladovic said, at one point waving the budget documents in the air.

“Very much” the same thing

Fundamentally, Tuesday’s fiscal report and stabilization plan “very much is the same thing” as the one L.A. Unified submitted to the county in December, Price told reporters Monday.

1 The 1 percent reserve remains unmet, according to Price.

California districts are required to have a reserve for economic emergencies each year that amounts to at least 1 percent of their total expenditures. But the latest budget, which by law has to include projections for the current fiscal year as well as two years out, forecasts a 0.96 percent reserve in 2020-21. December’s budget projections showed the same percentage. L.A. Unified is about $3.1 million “below the 1 percent reserve,” Price told the board Tuesday. 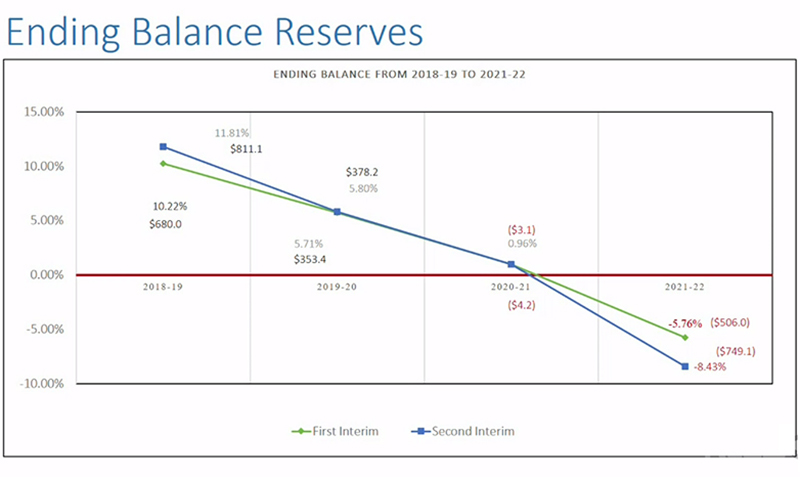 The district “used $75 million of one-time central office carryover funds to get to the 2020-21 reserve of .96%,” a spokeswoman explained in an email on Wednesday.

The district’s minimum reserve level plays a large role in whether the county decides to install a fiscal adviser, county Superintendent of Schools Debra Duardo told LA School Report in January. A fiscal adviser would have “stay and rescind power,” meaning he or she could rewrite budgets and overturn school board decisions.

Not taking into account potential future revenues, L.A. Unified is projecting a deficit in 2021-22 that is $749 million below the 1 percent reserve, Price said Monday. (Deficit spending means the district is spending more than it’s taking in.) The new estimate is nearly 50 percent above the $506 million deficit previously projected. Price noted Tuesday that along with the district’s new union contract obligations, declining enrollment of more than 12,000 students a year continues to cause L.A. Unified substantial financial strain. 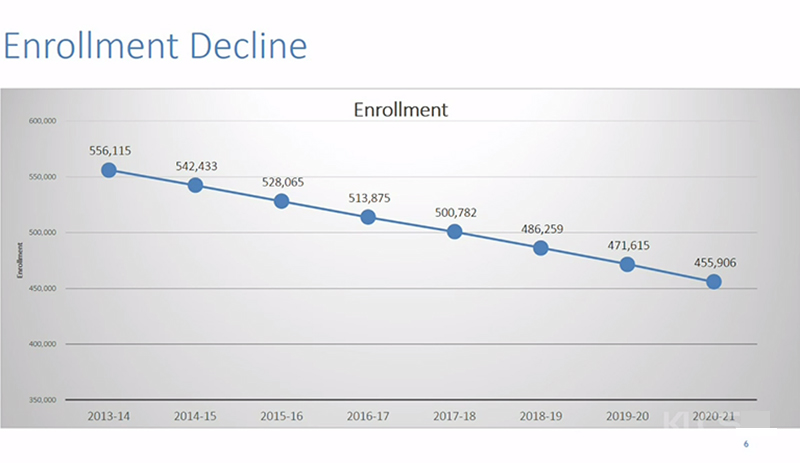 “We will need [another] fiscal stabilization plan” in the coming months “because of the deficit that we have in that 2021-22 year,” Price told board members Tuesday. “We know that we’re going to have to look for increased revenues, and we’re working on that.”

More budget projections on the 2021-22 year will be available come June, when the district reveals its 2019-20 budget.

When asked Monday about cuts to the budget, Price highlighted the $85.8 million in savings the district plans to receive from central office reductions over a two-year span, which was already included in the December plan.

There are other cost-saving measures not included in the fiscal plan that the district is pursuing, Price added: a three-year waiver on the teacher-administrator ratio penalty that would save $105 million, continuing “efficiencies or reductions in costs” efforts that could save $100 million and potential real estate sales or leasing opportunities that could generate $100 million.

The district spokeswoman clarified in an email that those “efficiencies” could include contracting “through other government agencies with large vendors instead of buying directly from manufacturers or smaller vendors.”

When asked about possible fixes to L.A. Unified’s staggering health and welfare benefits costs, the spokeswoman noted there aren’t “any health care savings” outlined in the fiscal stabilization plan. But the district expects there to be some savings in the future from “a 50 State Medicare Plan that was put into place by the Health Benefits Committee beginning January 2019,” she wrote. 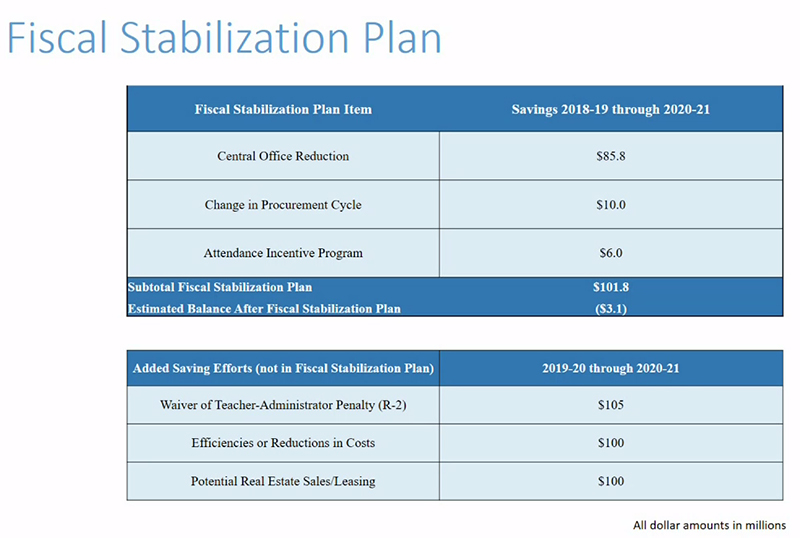 “The district is taking steps toward greater fiscal responsibility,” Board District 4’s Nick Melvoin wrote in a statement to LA School Report on Tuesday. “The reality remains that we are an underfunded school district that needs to simultaneously grow the pie while working to cut bureaucracy and get more caring adults on campuses.”

District 6 board member Kelly Gonez on Tuesday noted that the central office reductions extend to the local districts, and she asked Price if some of those cuts could be reconsidered depending on the breadth of new funding. “Our local districts do a lot of really important work. My principals tell me all the time how valuable those supports are,” she said. “So I hope that if some of these additional savings are realized, we can spare the local districts from those cuts.”

Price also confirmed Monday that Local Control Funding Formula monies explicitly set aside for targeted student populations — low-income youth, English language learners and foster youth — have not been compromised as the district tries to rein in its budget.

The biggest addition to the budget from last December was the teachers contract agreement “to invest more in lowering class sizes and increasing the numbers of librarians, counselors and nurses,” Price told reporters Monday. And that comes with finding a way to pay for it.

Officials have repeatedly emphasized that new revenue is vital for the district’s solvency. Price re-upped that call this week, citing the “necessity” of a parcel tax that’s now on the June 4 ballot. Measure EE, if approved by at least two-thirds of voters, would enact a districtwide $0.16 per square foot tax — a tax of $240 a year for an owner of a 1,500-square-foot home, for example. This would generate $400 million to $500 million annually starting in the 2019-20 year: about $350 million for district schools, and the rest going to independent charter schools.

“Measure EE is critical to really opening up conversation … [about] the potential investment in schools, rather than having to deal with the year-to-year ‘third-year’ conversation” that is consistently foreshadowing doom and gloom, Price told reporters Monday.

Seth Litt, executive director of the advocacy group Parent Revolution, says he’d support new measures like a parcel tax, but he needs to see more transparency and clearer goals for the funding. “It’s crucial that there’s a sense of transparency, that these things are not happening in the dark … and that there’s a real vision for how the money is spent to improve student outcomes,” he said.

On how the updated plan improves student outcomes, Price cited the benefit of lowering class sizes and adding staff such as nurses, librarians and counselors.

Melvoin told board members last month that a parcel tax “will only pass if we can convince the community that we can do more with the money, and do so transparently and thoughtfully.” In that spirit, the tax would “include an oversight plan so that voters can continue to hold the district accountable for spending our money more wisely,” he wrote Tuesday in a statement to LA School Report.

While it’s premature for a parcel tax to be incorporated into district budgeting, L.A. Unified officials did include some new projected revenue from Gov. Gavin Newsom’s proposed budget: a $44 million bump thanks to a projected cost-of-living adjustment and $48 million in pension relief over two years. County overseers have cautioned against “relying on this projected revenue since the Governor’s 2019-20 Budget is not yet finalized.”

Price acknowledged Tuesday that “we don’t know until June what we will be getting from the state specifically.” He added: “[We’re] watching the dynamics that are happening with the revenue that comes into the state right now.”

Only two members of the public spoke on the district’s finances at Tuesday’s board meeting. One was active L.A. Unified parent Maria Daisy Ortíz, who expressed frustration that the district continues to budget behind closed doors with minimal parent engagement. Including her comments, the presentation of the fiscal plan and board discussion took about a half-hour of the four-hour-long meeting.

When asked Monday whether the county would accept the updated plan, Price said L.A. Unified officials “are in constant communication with the county office” and are continuing to collaborate with a fiscal advisory team that the county assembled in January.

That team “hasn’t suggested doing anything different than what’s in the fiscal stabilization plan up to this point,” Price said. “The county has its sights on beyond the ’20-21 school year — just as we’re looking at that too.”