K-12 schools that cut instructional time by switching to a four-day week see meaningful reductions in student learning, according to recently published research. The effects are similar to those resulting from other common approaches to cost reduction, such as increasing class sizes, and the negative academic effects may intensify with the passage of time, the author finds.

The trend toward closing schools for one day each week — or at least replacing academic programming during a fifth day with enrichment, field trips, or professional development for teachers — was spreading quickly before the arrival of COVID-19. But the pandemic’s effects, including significant drops in test scores, also point to the damage wrought by lost hours in the classroom.

Tests Show Growth, But Not Enough To Close Pandemic-Related Gaps

The study, originally published in January and featured today in the journal Education Next, looks at the academic outcomes of nearly 700,000 Oregon students between the 2004-05 and 2018-19 school years. The total number of schools in the state using a four-day week fluctuated from a low of 108 to a high of 156 during that period, with a large surge in adoption during the budget crunch that followed the Great Recession.

Study author Paul Thompson, an economist at Oregon State University, said that most of the schools making the switch were highly rural, enrolling as few as 20 students. The change was implemented differently across districts, he added.

“These are unique situations, and after surveying these schools and talking about why they adopted this four-day week, there’s no one-size-fits-all approach in terms of why they adopted it or how they structure them or what they do on the off day,” Thompson said. “That makes it difficult to think about one blanket type of policy for these schools.”

One consequence that doesn’t vary much, however, is lost learning time. Even though schools tend to expand the remaining school days by roughly 50 minutes to compensate for the missed day, that still leads to students losing out on three to four hours of learning each week.

By studying districts that switched to a four-day week during the period under study and comparing them with other districts that did not, Thompson found that the reduction in teaching resulted in lower test performance for both math and reading. The decline was particularly pronounced for students in the seventh and eighth grades; those larger impacts may result from the earlier start times necessitated by lengthening the other four school days, which could disrupt adolescent sleep schedules.

But the average loss in learning may mask even greater detrimental effects. Some schools in the study shortened their week for a year or two as a result of financial necessity, then quickly returned to a standard schedule when their circumstances permitted it. Those schools still experienced a drop in student achievement, but it faded over time as things reverted to the status quo. For those that stuck with the four-day week, learning loss grew considerably as the years passed.

“The important piece here is that if you’re losing instructional time year-over-year, that learning loss is growing over time,” Thompson said. “For schools that continually have reduced instructional time year over year…relative to what they would have had if they’d gone back to the five-day schedule, they see this compounding negative effect.” 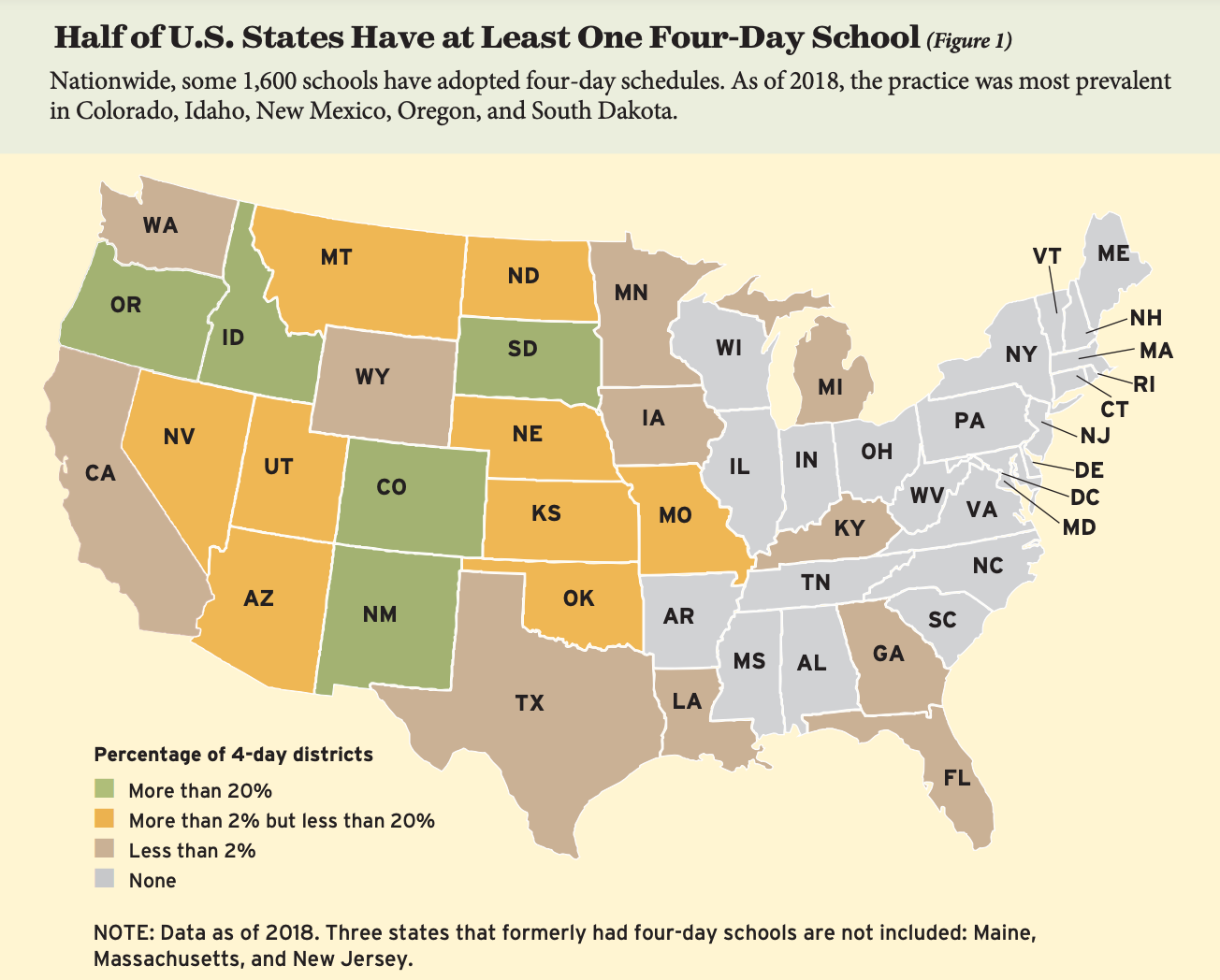 The movement toward reducing instructional time is by no means exclusive to Oregon. According to analysis from the Center for Reinventing Public Education, half of all states are home to at least one school running on a four-day week; in five states, all in the West, over 20 percent of all schools have followed that course. Examining the policy’s nationwide spread, Thompson found that the number of such schools grew from 257 in 199 to over 1,600 in 2019. While some provide office hours or other supplemental learning options on their fifth day, others are fully closed to staff and students.

Pre-COVID, the trend had already grown so quickly that researchers at CRPE called it a “contagion”; in one state they studied, Idaho, 42 out 115 districts had changed to a shorter schedule. And while the arrangement is often popular with both teachers and families, who can struggle to commute long distances to reach schools in rural areas, the hoped-for cost savings don’t necessarily arrive as advertised. In a 2011 report on six four-day districts, Learning Policy Institute analyst Michael Griffith found they saved between .4 percent and 2.5 percent of their total budgets by instituting the change — largely because they continued to keep schools open for a fifth day to allow for teacher training and student extracurricular activities.

The negative impacts measured by Thompson may also hold ominous implications for students who spent months out of school during the pandemic. Even those who were long ago allowed to return on a hybrid schedule experienced disruptions to the traditional rhythms of school that far exceed those imposed by a shorter week. According to RAND’s ongoing surveys of American teachers, just 12 percent of respondents said that they had covered all of the curriculum that they would have if their schools had stayed open. A California analysis published last fall found that as many as 20 percent of low-income students received no live instruction during the course of a given week.

To address the huge needs faced by families and schools looking to get back to normal, Democrats in Congress passed the mammoth American Rescue Plan, including over $120 billion in new funding for K-12 schools. The money can largely be used at the discretion of states, and may ultimately be spent providing summer programs and intensive tutoring that effectively lengthen the school year.

Robin Lake, director of CRPE, compared the “heavy burden” borne by families struggling to adjust to four-day school schedules — and often left without child care coverage for part of the week — with the challenges posed by the year of COVID. Contemplating what it would take for kids to recover from being separated from teachers and classmates, she argued that the solution “can’t be less of anything. It has to be more of everything.”

“I look out at the next couple of years, and I see an almost impossible problem to solve,” she said. “A very concerning lost instructional time, especially in math and especially for certain kids. Extraordinary challenges for kids when it comes to mental health and social-emotional learning. Lost therapeutic services and other supports for students with complex needs. It’s just an extraordinary challenge, and how do we solve that without maximizing the time that kids have in school with teachers?”

Thompson said he was optimistic about the evidence from schools that only temporarily used a four-day week, which ultimately saw “minimal” learning losses as a result. But the long-term consequences for the students involved, including on important benchmarks like persistence in school and high school graduation, still need to be closely studied, he cautioned.

“That’s good news to think about, and it’s what we’re hoping will happen if schools are able to open full-time and kids can get back to instructional time consistent with what we saw pre-pandemic. Hopefully some of these knowledge losses can be caught up. But there are questions about some of the long-run ramifications on outcomes besides achievement.”