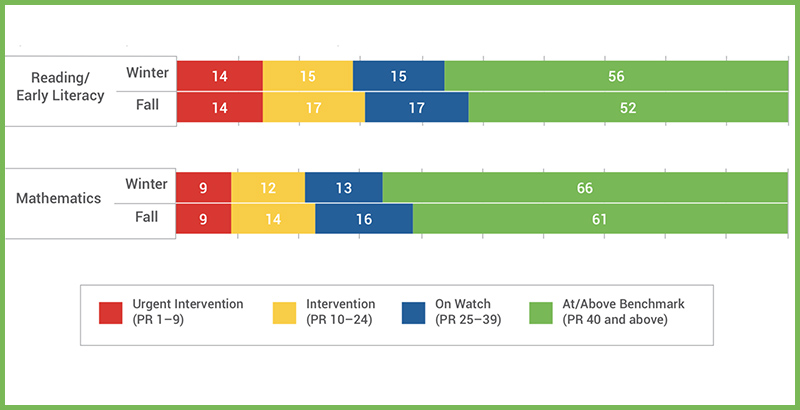 Brett Walter’s seventh graders make it clear when they don’t want to read aloud. It’s already challenging, he said, to get them to turn on their cameras during remote classes, much less their microphones.

But when he calls on students to read, “I have had several instances where …they immediately leave the class,” said Walter, who teaches English language arts and social studies at Bert Corona Charter School in Pacoima, California, near Los Angeles.

Of his 60 students, only about a fourth are reading on grade level, he said. And while some read books during the pandemic, he has “just as many that have only fed their video game addiction.”

His middle school students aren’t the only ones who haven’t progressed in reading this school year. According to mid-year testing data from Renaissance, which runs the widely-used Star assessment, seventh and eighth graders across the country were within three weeks of meeting normal expectations in reading last fall. By March, however, they were eight to 11 weeks off track.

The results reflect the scores of 3.8 million first- through eighth-graders who took the tests three times since fall 2019 and provide the latest glimpse into the impact of the pandemic on student learning. The overall findings offer some hopeful signs. Across all grades tested, student performance approached a normal level of growth between fall and winter. And compared to fall, fewer students are scoring in a range showing they need intervention. But Katie McClarty, the vice president for research and design at Renaissance, said the growth is not enough to make up for lost instructional time from remote learning. And as with the Star data released in November, the results show slower progress for students of color, those with disabilities, English learners and those in urban or Title I schools.

“That is not the kind of growth we need to make up the gaps,” McClarty said.

Nationally, the growth score was 46 in reading and 48 in math — fairly close to a score of 50, which represents the average progress students would make in a typical year. But the growth score for Black students in reading was 37, meaning that they exceeded only 37 percent of students in the same grade level with similar past performance. For white students, it was 49.

The state-by-state results show a correlation between academic progress and in-person learning. In Wyoming, where most schools have been open all year, the growth score in reading was 60, well above the national average. But in California, one of the slowest states to reopen, it was 42. 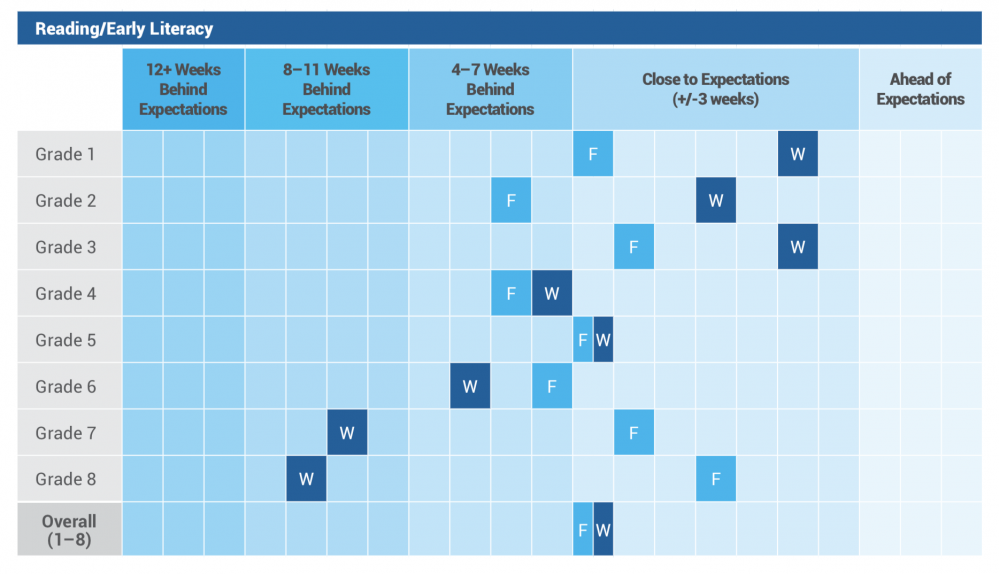 McClarty said she was surprised at the disappointing results in middle grades reading, pointing to less access to physical books at school and public libraries as a possible reason. A separate Renaissance report released in March showed that students are reading twice as many digital books as they were in 2019, but McClarty said middle school students might struggle with more complex material online. In addition, research has found that children absorb more when they read physical books.

“It was very difficult to get books to kids, and there are not a lot of books in the home,” said Alfredo Celedón Luján, who teaches seventh grade at a Title I charter school in Santa Fe, New Mexico, and serves as president of the National Council of Teachers of English.

He distributed ebooks to students — among them, “The Alchemist” by Paulo Coelho and “Thank You, Ma’am,” a short story by Langston Hughes. But a student who is reluctant to read an actual book becomes a “double reluctant reader” when asked to read digitally, he said.

During group readings, students in his classroom turn the pages and appear focused, while those at home, he said, are easily distracted. Each day, they are supposed to write responses to what they read, but those learning remotely often turn in statements like, “This is a cool book.” 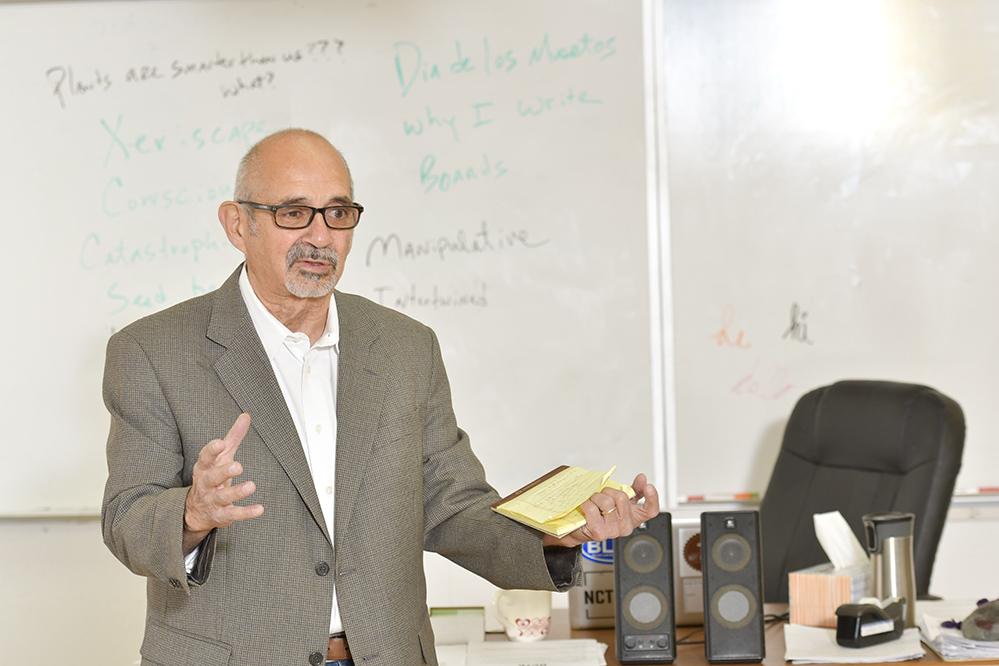 Alfredo Celedón Luján teaches seventh grade English language arts in Santa Fe, New Mexico. About half of his students are back in person. (National Council of Teachers of English)

The Star results tell a more positive story about younger readers. In the early grades, students have either caught up or are just slightly behind where they would normally be at this time of the year. That data differs from what curriculum provider Amplify released in February, showing most students had not made normal progress between fall and winter and that 20 percent fewer kindergartners were on track to learn to read.

One possible explanation for the different findings, McClarty said, is that Star data captures both “emerging” readers and those with more advanced skills who continue to show growth.

‘The reality of schooling’

The latest results include a new feature comparing the performance of students who were assessed at school and those who tested outside of school, which could be at home or another setting, like a pod The findings could have implications for states like Massachusetts that will allow students to take standardized tests at home this spring.

Jim Cowen, executive director of the Collaborative for Student Success, an advocacy group that promotes standards and accountability, called Renaissance’s report “a thoughtful consideration of assessment data” and said there’s a risk the impact of the pandemic “won’t be a temporary bump in their education, but a significant moment that will be immensely difficult to overcome.”

The Star data provides some context for states and districts as they prepare for summer school and discuss how to use some of the nearly $122 billion in federal relief funds designated for learning recovery.

An analysis from the University of Washington’s Center on Reinventing Public Education, released last week, showed that 53 of the 100 urban and large city districts have not yet posted any details on their summer learning plans. And many of those posted are vague and “lack explicit learning supports,” according to the review.

The U.S. Department of Education, along with the National Governors Association and the Council of Chief State School Officers, launched the Summer Learning and Enrichment Collaborative this week to give states and districts ways to learn from each other as they allocate the funds.

In January, Education Resource Strategies, a nonprofit consulting firm, estimated that districts would need to spend roughly $2,500 per student each year over the next five years to effectively address learning loss, including tutoring, extended school days and social-emotional programs.

Karen Hawley Miles, president and CEO of the organization, doesn’t think the upturn in the Star results means the challenge has gotten any easier.

“Maybe it helps us focus that investment much better,” she said, calling for an emphasis on early literacy and organizing schools to better support students who have been in distance learning for a year without a lot of help at home.

In California, Walter has been working with his students since 2019-20, when they were in sixth grade. Back then, only two students were learning at grade level. Because the school serves a low-income population, he said it’s hard to separate “what is ‘normal’ and what is ‘COVID.’”

He thinks just getting them back in the classroom this fall could make a big difference in their reading skills, but he also thinks teachers and parents should consider retention — a policy getting renewed attention this year.

“You really need to think about whether … moving onto the next grade when they are not ready is in the student’s best interest,” Walter said.