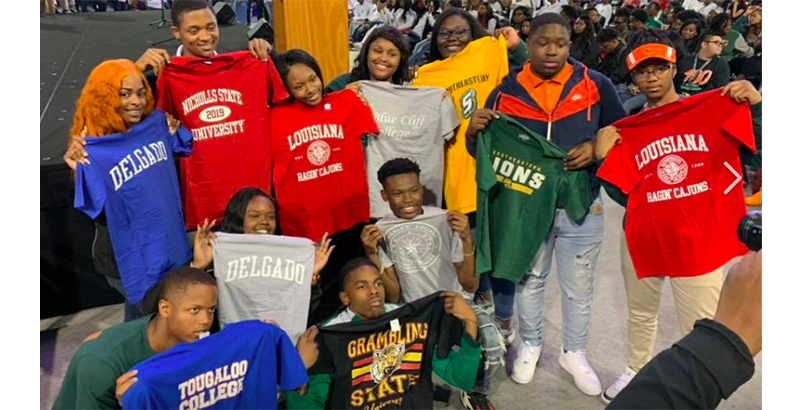 Jadda Green mounted a few steps, crossed the stage and unfurled a blue and white T-shirt emblazoned with the Connecticut College logo. Until that moment, she’d kept her choice a secret from her friends and teachers. A 4.0 GPA had won her admission to the exclusive college — as well as scholarships to cover most of the cost.

The crowd gathered in the arena was riding a wave of kinetic joy. Pumped up by an hour of live performances by some of New Orleans’s most celebrated high school bands, Collegiate Academies’ 320 seniors took turns waving shirts and pennants identifying the colleges they’ll attend in the fall. Knowing the hard work that went into polishing admissions essays and nudging up ACT scores, their parents and teachers cheered through tears.

Signing Day is a pinnacle, the day when years of effort are supposed to start paying off. But for students like Green and her classmates, who lived through Hurricane Katrina and, in the years since, frequent moves, gun violence and other trauma, the day often also hides a cliff.

As celebrations are replaced by the reality of starting a new life alone, in a strange place, these students are likely to find themselves struggling to tend to both college academics and their emotional health.

A network of six public charter schools in New Orleans and Baton Rouge, Collegiate has sent seven graduating classes off to pursue bachelor’s degrees. In that time, the schools’ leaders have learned that their graduates’ unmet mental health needs are a major barrier to success in higher education. But with careful planning and the largesse of an anonymous donor, Collegiate is sending its class of 2019 to college bolstered by mental health supports. 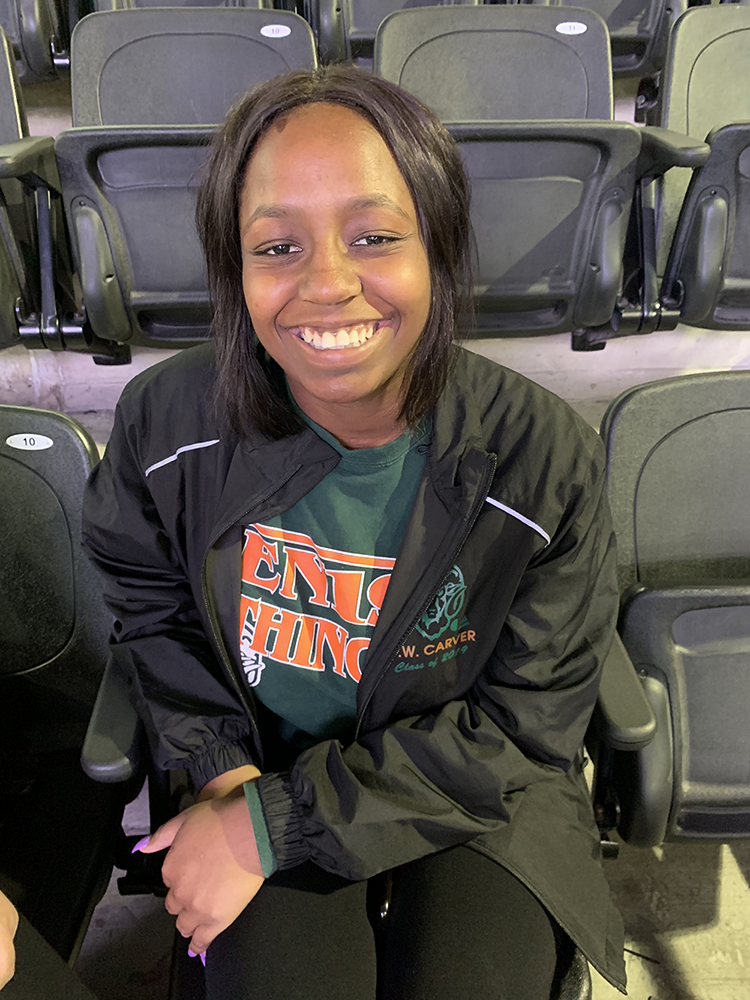 Green, 18, has just one memory of Katrina. She was 5 and sheltering in the Superdome with her family. Her mom and her aunt were playing cards, and the competition, like everything else in the squalid arena, had overheated to the point of becoming volatile.

“I averted my gaze,” Green wrote in an essay included in her college applications. “That’s when I saw him jump.”

One of three people to die in the days before the floodwaters receded, the man she saw leap from the arena’s upper tiers is a permanent fixture in Green’s consciousness, becoming a symbol of all she would lose. Three of her extended family’s homes were destroyed in the storm, and without the money to restore them, the family was forced to relocate to Texas, where Green lost her grandmother, aunt and grandfather.

By the time she moved back to New Orleans in 2014 and enrolled at George Washington Carver High School, Green said, she had started over in multiple schools, each time “entering into a brand-new atmosphere where people assumed I didn’t know anything at all.”

Green got into 18 of the 23 colleges she applied to. Expensive and highly selective, Connecticut College initially was a tough sell. Fewer than 4 percent of students on the campus are black. She worried that she’d feel especially isolated. But counselors persuaded Green to make a two-day stay on campus last summer, and a warm welcome allayed her fears.

Collegiate Academies’ first school, Sci Academy, opened its doors to a founding class of ninth-graders in 2008. At graduation, 97 percent of the class had been accepted to a four-year college or university. The network has opened five more schools in the years since then; three have been in operation long enough to graduate their founding classes.

As at KIPP and other high-performing, high-poverty schools, Collegiate staff knew their graduates faced uphill odds on college campuses without the kinds of support the high schools provide — or the watchful gaze of parents who have been to college themselves.

Charters and District Schools Share Strategies on Getting Low-Income Students Through College, Putting Uneasiness Aside

Nationally, there is an 18-point gap in graduation rates between students who receive Pell Grants — 75 percent of whom come from families with annual incomes of $40,000 or less — and those who don’t qualify for the federal aid, according to the think tank Third Way. Of the 965 institutions that serve a larger-than-average number of Pell recipients, only 48 graduate two-thirds or more of students receiving the grants.

Louisiana, the group found, is one of seven states that has no college serving a greater-than-average number of Pell students with a graduation rate of more than 50 percent.

To bridge this gap, as the number of Collegiate alums grew, in 2012 the network launched CA Next, a program to support its graduates in college. A staff of seven helps with everything from financial aid and enrollment to troubleshooting issues that come up as graduates make the transition. The program holds alumni events, visits graduates on campus and collects data to help network high schools better prepare students.

“Anybody who graduates from a Collegiate school gets an alumni adviser,” said Director of College Access Programs Sophia Scott. “Almost all of our kids participate voluntarily.”

Between 2012 and 2018, 40 percent of graduates who went on to higher ed have persisted there — a figure that does not include associate’s degrees or career certification programs. Collegiate’s six-year college graduation rate is 15 percent, nowhere near where the schools’ leaders would like it to be but nearly double the 8.3 percent national average for their demographic.

It’s important to understand, Scott noted, that as the number of students graduating grows, the barriers they encounter to staying in and finishing college multiply, keeping the completion rate lower than the school wishes. Students often are forced by finances to take breaks, or decide to reverse course and complete a trade program that offers a more direct path to a job.

Also, Collegiate has prioritized partnerships with institutions of higher ed that recognize and work to address issues that are common among low-income and first-in-family college-goers. The most popular destination for the class of 2019, for example, is Dillard University, which has a formal program for such students.

CA Next staffers track the issues they help troubleshoot. In the process, Scott and her colleagues realized they frequently heard from graduates who struggled not just with the obstacles all first-generation freshmen confront, but also with maintaining their mental health. Too many dropped out.

Challenges range from difficulty finding the right support services in a new city to accessing affordable insurance for students who are no longer eligible for Medicaid when they turn 18. So this year, the program has added two part-time mental health practitioners. Any alum can ask for one-on-one counseling from the new staffers or for a campus referral.

Sometimes, the support involves thinking through an individual student’s fears. When Diana Bell, who just graduated from Collegiate’s Abramson Sci Academy, was applying to colleges, she worried about trying to be independent in a place where she didn’t know anyone. “Because I am such a person who connects to many people and depend on my mom at times, I am concerned I might fall apart,” she said.

Bell’s mother panics on highways, dimming the prospect of frequent visits to the University of Louisiana at Lafayette, where Bell plans to major in chemistry to pave the way for a career as a physician’s assistant, the same as her mother. Talking to people she doesn’t know makes her anxious, compounding her fear of moving away.

Bell was accepted into UL Lafayette’s Louisiana Educate program, a college-completion initiative that pushes students to stay organized and engaged. Participants must live in the same dorm during their freshman year and attend at least six hours of study hall a week. They are also required to join two student organizations, attend a number of events each term and complete internships.

This means several things for Bell. In addition to making sure she meets people and that staff see her often, she will have a ready-made social group. Collegiate is sending a number of students to UL Lafayette through the program, so she will already know many Louisiana Educate participants. Plus, she’ll have neighbors to ride home with when she wants to see her mom.

“I think there will be lots of places where she will feel connected,” said Scott.

Years after the trauma of the Superdome, Green was diagnosed with bipolar disorder. She lay under her covers after hearing the news, wanting nothing more than her grandmothers. “Neither was available,” she wrote in her college application essay. “They were both in their urns.”

In desperation, she thought of joining them in death. “Broken down by my past, I was ready to let my accomplishments pour like water to the ground,” she continued. “I didn’t know my future would rise like steam from the pavement on a New Orleans summer day.”

And rise she has. Green sees her struggles as the source of a resilience she wants to nurture in future generations in communities like hers. After Connecticut College, Green plans to go to graduate school to eventually earn a degree in social work and a Ph.D. in psychology.

“The struggles of my background make me accountable,” she continued. “I’ll never give up while some from similar backgrounds are still in the midst of a battle. I used my experiences to persevere to the end of the journey through high school, and I will continue to use them to fuel me throughout the rest of my life.”