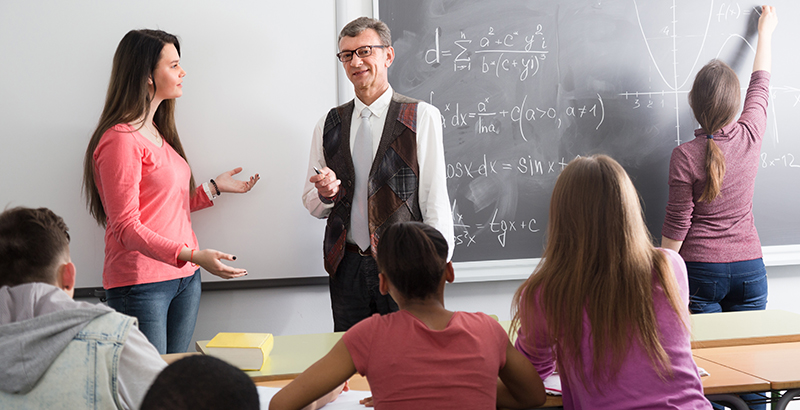 The new school year is upon us, but not all of America’s 3.5 million public school teachers have packed up their beach towels and headed back to the classroom.

While we don’t have a precise count on how many teachers retire each year, our best estimates put the number around 75,000. Of those, thousands may have preferred to keep teaching. So why are they leaving? Their pensions may be partly to blame.

The majority of teacher pension plans incentivize employees to retire at a specific age that’s pre-determined by each state’s legislature. For a teacher who begins her career at age 25, the median state allows her to retire with full benefits at age 58. That varies by state — in Kentucky, it’s 52, in California, it’s now 62 — but if a teacher exits the system after then, she stands to lose money, because every year she continues teaching is a year she could have been enjoying retirement.

Let’s walk through an example. Say a teacher entered the classroom at age 25 and reaches normal retirement age at 60, after 35 years of service. Assuming a 2 percent pension multiplier, and a final average salary of $70,000, her benefit is worth $49,000 a year right now.

But what if she’s not ready to retire? Maybe she adores her students and takes opportunities to mentor new teachers. Let’s say she decides to stay five more years and retires at 65. By staying those extra five years, she has increased her annual benefit to $60,000. (Many states also cap teacher retirement benefits, but for our purposes let’s ignore those caps for the moment.)

This may sound like a good deal — her annual benefit has increased by $11,000 — but she’s forgone five years of payments worth $49,000. That’s $245,000 in lost retirement income, not even counting interest. It would take 22 years worth of higher pension payments to make up the difference. On average, our hypothetical woman is expected to live only 21 more years. So, the financial decision to stay in the classroom means wagering that she plans to live longer than average, while also working an additional five years.

True, she would continue to earn her salary if she continued teaching, but if she retired and found a different job, she could collect both a salary and her pension. From a purely economic perspective, it’s in her financial best interest to retire at 60, no matter how rewarding she finds her job.

This set-up is rigid — it’s not attuned to any particulars about how well our teacher is doing at her job, or whether she might like to keep teaching, and it’s not doing teachers, schools, or students any favors. Just as this structure could encourage highly effective veteran teachers to cut short the careers they love, it may also incentivize less-invested teachers to slog through a job they’re no longer passionate about, just to maximize their pension benefits.

Now, some pension advocates say the retention incentives these plans offer outweigh any push-out effects. That’s a common myth, but it’s simply not true. In our recent study, we found that pension plans themselves do not assume that qualifying for a pension is enough of a retention incentive to change teacher behavior. Since about half of all new teachers don’t stay that long, that means the pension plan is missing a large group of workers.

Moreover, studies looking at pension plan changes enacted by states and cities have found that teachers generally do not alter their behavior in response to plan design changes. There’s one exception — those right on the cusp of retiring — but that’s a relatively small group of teachers. When looked at holistically, pensions exert very little pull on the front end and much larger push incentives on the back end.

At a time when our teacher workforce is going through the same aging process as the rest of our country, it’s worth asking why we still have pension plans in place that push out veteran teachers. As students head back to school, state pension plans are one reason why thousands of veteran teachers won’t be there to greet them.

Submit a Letter to the Editor
September 5, 2017