Rotherham: Even 1 School Shooting Is Too Many. But in Our Panic, We’re Missing a Far More Common Problem We Need to Solve 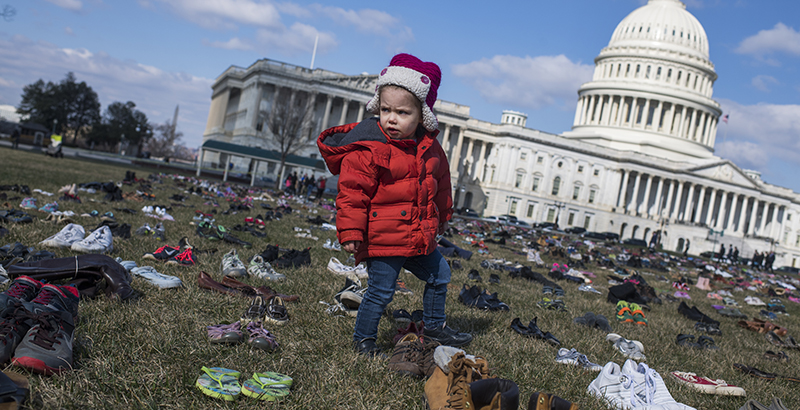 Evelyn Black, 2 1/2, of Capitol Hill, walks through about 7,000 pairs of shoes that are displayed on the east lawn of the Capitol on March 13, 2018, to represent the 7,000 children who have been killed by guns since the Sandy Hook shooting in 2012. (Photo credit: Tom Williams/CQ Roll Call)

A basic principle of effective shooting is that you control your breathing, focus, and do it calmly. That’s true whether you are shooting targets or tin cans or are in more serious situations. Reacting quickly or in a panic rarely yields good results. That’s why elite shooters put so many rounds downrange to get good at what they do.

Our debate about guns in schools, by contrast, seems increasingly fueled by panic rather than measured thinking and may have unintended consequences as a result. This week, again and again, we heard that 7,000 kids have been killed in school since Sandy Hook. That’s a staggering statistic — and major publications echoed it. It’s also a false one. That figure is an estimate of overall youth homicide by firearms — a horrific number that policymakers ought to do something about, but not a school statistic.

In the same vein, the oft-hyped stats on the numbers and frequency of school shootings are problematic because they conflate the threat with dubious definitions of school shootings: counting, for example, a stray bullet hitting a wall at an urban college or an adult committing suicide in a parking lot in the middle of the night in the same manner as the massacre at Parkland. This gets parents spun up and inadvertently fuels the National Rifle Association’s dystopian narrative about needing good guys with guns everywhere.

A single school shooting is one too many, and every mass shooting is ghastly. The regularity of gun violence is a problem for schools and communities. But although you would not have known it this week, schools are actually pretty safe places for kids to be. School advocates might want to point that out for anxious parents, and it’s a credit to educators that schools are as safe as they are overall.

Meanwhile, among other preventable risks, young people in this country are more likely to die from being poisoned, drowning, overdosing, being killed on their bikes, and of course being killed by or in cars than being killed in a school shooting. Suicide claims exponentially more young lives. Mass school shootings are especially rare and have actually been declining since the 1990s. Parkland was awful; it was also, thankfully, an aberration.

As parents, we are obviously terrified by these episodes replayed endlessly on TV. My children were in the same grade as the students at Newtown, and I remember leaving work early to walk with my wife to pick our kids up that awful day — to join a crowd of moist-eyed parents doing the same thing. I was sad, scared, and pissed off at the recklessness that gave that shooter access to those weapons. But as hard as it is, we’re always wise to make public policy based on evidence rather than emotion.

For starters, count me among those who would like to see fewer lockdown drills with kids and more intensive training for adults instead. Some general training about more in-depth first aid, situational awareness, and other emergency skills would help educators in a variety of circumstances they’re more likely to face than a mass shooting. The lockdown drills are needlessly stressing out kids with questionable effect, even as other potential threats are often overlooked.

Along those same lines, investments in making schools safer, harder targets should be forward-looking and employ measures that don’t make them more like prisons. Arming teachers is an obviously bad idea, but we can also do better than install metal detectors and other intrusive measures that send corrosive signals to kids.

In addition, it’s hard to miss that mass school shootings get the attention and drive the panic, but the routine killing of black youth barely makes a dent in public awareness. Even this week, you heard a lot more about banning “assault” weapons than handguns, even though that 7,000 figure is largely from what’s now routine carnage from handguns. Black youth are 10 times as likely as white youth to be killed by firearms. We should talk about gun violence with more nuance and a clear-eyed appreciation of the race and class dynamics at play, or else this is all more about suburban politics than solving our gun violence problem.

We might also get more serious about mental health services for students and young people and the general culture of violence we take for granted. President Trump mentioned video games, so of course all right-thinking people immediately dismissed the idea that there could be any relation between first-person-shooter games (and violent games more generally) and the problem of youth violence. Trump, of course, wants no part of serious gun safety measures. Only our broken politics makes us choose sides when focusing on gun safety, mental health, and a culture of violence instead of exploring all three and other related issues.

Again, none of this is to say we don’t have a gun problem in this country, that we shouldn’t pay attention to school shootings, or that the Republican servitude to the National Rifle Association is not cowardly and obnoxious. The ubiquitous nature of firearms in our civic life troubles many gun owners, too, and many pro–Second Amendment Americans believe that it’s not somehow the only amendment without some limits on it. Gun violence, mostly handgun violence, is an enormous problem we’re long overdue to address.

Yet many issues fueling gun violence in this country didn’t get a lot of attention this week, despite all the protests. One shooting at a school is too much. But we’ve spun ourselves into such a politics-fueled panic, we’re not even thinking clearly about the problem we’re trying to solve. Doing so is a first step toward solving it, for schools and more generally.