Roland Martin: Want to End the ‘Death Match’ Debate Over School Choice? Accept That There Is More Than One Way to Educate Our Children 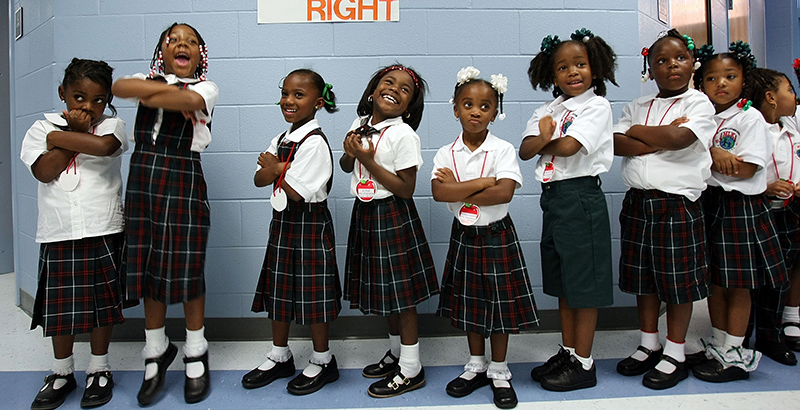 Let me just get right to the point: I am sick and tired of this silly, pathetic, and nonsensical debate when it comes to whether charter schools or school choice should exist.

Pick an argument against this. Take your time. I’ve heard every single one of them. And all of them are utterly irrelevant.

The only issue that matters to me when it comes to education in America is whether our kids are learning. It really is that simple.

For far too long, we have operated as if public education can only be delivered one way. I categorically reject that idea because there is nothing in our society that is delivered one way. Packages, health care, college education, air travel, rental car companies; we have choice.

But this debate has evolved into a death match. You’ve got folks on one side that despise teachers unions and don’t like their role in liberal politics. On the other side, you’ve got folks who despise rich folks for advancing ed reform and accuse them of privatization. There are grassroots people who don’t want to be treated like children and desire to be in control of their own destiny. There are the politicians and policymakers who are often quick to pile on rules on top of rules thinking that is the answer. The noise become so loud and chaotic that most folks just tune all of it out and say, “I’m done. Y’all figure this out.”

Public education has become this big piñata that everyone wants to take a swing at, and the only thing that ends up happening is most folks take their swing and end up missing.

Why have I chosen to step outside of my role as a journalist and to be an ardent education advocate, especially on the matter of school choice? Because I’m tired of the BS and seeing Black kids go through a system that is collectively failing them.

As the sibling of three teachers and a teacher’s aide, I’ve heard the horror stories of bureaucracy, low pay, onerous rules, out-of-control parents, and, yes, fellow teachers who have accepted the idea that teaching is the job of last resort.

As a man who has raised six of my nieces with my wife, I’ve had to confront the downside of traditional public schools, but also the failings of K-12’s online curriculum. My wife and I have worked hard to navigate the maze in order to provide the best outcomes for our nieces.

Look, I’m not some dude who grew up in a bougie Black home where my parents — neither of whom attended college — were well off and sent us to private schools. The Clinton Park neighborhood in Houston was a low- to moderate-income place where I was raised. My entire life has been spent in traditional and magnet schools. I’ve personally seen what happens when choice — and yes, magnets schools fall under the umbrella of school choice — is applied. It opens up opportunities that would otherwise not exist.

So how do we end the fighting as to what’s the best way to educate children? Easy: we accept the reality that there are multiple ways that it can be done. One size does not fit all. The most important measurement is simple: Are they learning? And not just are they learning to pass a test, but are we teaching kids to think, to process, to study the past and present in order for them to make informed decisions in the future?

With 20 New (and 16 Re-elected) Governors Laying Out Education Plans, Here Are the Four States Where School Choice Seems Like a Priority

That means not stifling innovation. It means accepting that some education solutions we try will fail. But others will succeed. It means that we have a zero tolerance for failure. If a traditional school is failing, shut it down and do something different. If a charter school isn’t up to snuff, say good riddance. If school vouchers are an option, try it, and see if it works for parents. We must be willing to open our minds to receive new ways of teaching in order to prepare our kids for the 21st century.

While adults are spending their time fighting, our children are being further left behind compared to other nations. They are living in a world that needs them better equipped for the future. If you want to be part of the solution, I’m willing to stand with you to get education right. But if you’re part of the problem, please, shut up and get the hell out of the way. We have no use for critics who don’t bring anything of substance to the table.