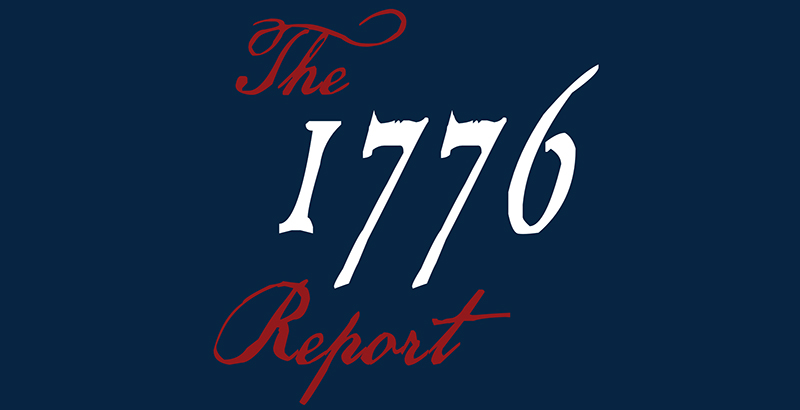 “The Commission’s first responsibility is to produce a report summarizing the principles of the American founding and how those principles have shaped our country.”

That is how the President’s Advisory 1776 Commission introduced “The 1776 Report” this week. In doing so, the commission was not determining K-12 curriculum. It was not setting state social studies standards. At best, it was seeking to reinforce the teachings that generations of Americans learned about their nation’s founding. At worst, it was a ham-handed attempt to attack The New York Times and its 1619 Project. But the 1776 Report is the furthest thing from being the “curriculum” that so many have already condemned.

One only needs to look at those who served on the 1776 Commission and what they wrote to know that this report was never intended to stand as curriculum, nor was it designed to be translated into a curriculum as the 1619 Project has. It is a political document offered by political voices who would (and have) advocated against a “national curriculum” as passionately as possible. It is a report embraced by those who may want the opinions found in the report taught as historical gospel, yet are the same who say national math standards are far too controversial and the federal government has no such business undertaking. It even declares its opposition to national curriculum in general, noting that what is taught should be left to the states and localities, one of the few education policies of the Trump administration.

If there were educators on the commission, they would have made clear you don’t establish a core curriculum over the course of two or three months, in a process that largely excluded stakeholders such as teachers, historians and parents. If one were serious about creating a common American history curriculum, one would look to the model launched by South Dakota Gov. Kristi Noem this week, as she kicked off a statewide process to develop classroom curriculum that would teach K-12 students “why the U.S. is the most special nation in the history of the world.” A process that includes standards, sequencing, curriculum developed and approved by educators, school districts, legislators and the state board of education.

That isn’t what the 1776 Commission did. Instead, it followed a process that, in our current political environment, makes it easy to trash the report. It’s equally easy to discredit the significance of 1776 as simply our nation’s founding through the eyes of dead, white, male landowners. Doing so, though, would be a mistake.

The report provides us with an important lesson. To paraphrase from the 1776 Report, the principles of America “can be learned by studying the abundant documents contained in the record.”

Those records can, and should, include those detailed in the 1619 Project and the 1776 Report. They include the Gettysburg Address and Letters from Birmingham Jail. And Patrick Henry’s “Give Me Liberty Or Give Me Death” speech. And Frederick Douglass’ “Hypocrisy of American Slavery.” And William Jennings Bryan’s Cross of Gold speech, Richard Nixon’s “Checkers” speech and Ronald Reagan declaring, “tear down this wall.” It includes Barbara Jordan’s remarks at Nixon’s impeachment hearings and Shirley Chisholm’s 1972 campaign speeches. And it includes the writings and speeches of Jefferson, Woodrow Wilson, JFK and many others.

The American record — whether it be measured by the 402 years since 1619 or the 245 years since 1776 — is hopeful and ugly, inspiring and debilitating, a shining beacon and an unshakable dark cloud. More simply, American history is incredibly messy and contradictory; how we teach it even more so.

The effective teaching and learning of American history requires more than praising the Declaration of Independence and the Bill of Rights. It requires far more than a basic survey course typically taught just twice over a learner’s 13-year educational career. It requires more than just passing a multiple-choice test that quizzes one on basic names, dates and battles. It demands instruction that provides the opportunity for learners to think like historians and truly probe why our nation did the things it did. For understanding that both 1619 and 1776 are part of our nation’s DNA and for exploring both and how they both impacted our subsequent history.

For years, our nation has been hearing how important it was to increase investment in civics education. If we have learned anything from the last year — from George Floyd and #BlackLivesMatter to 2020 electioneering to even the assault on the U.S. Capitol earlier this month — it is that we are keenly aware of the basics when it comes to civics. Those basics have been on display in our streets and corridors of power.

These demonstrations of civic understanding have shown that we don’t need increased investment in civics — but we certainly do in American history. Whether it be the 14th or 25th amendments, the British siege on the Capitol in 1814 or the ramifications of the Election of 1876, we lack the collective historical knowledge necessary to translate civic education into meaningful, positive community change.

The principles and beliefs identified in the 1776 Report are the same as those espoused by our Founding Fathers. The same as those embraced by many Confederates during Reconstruction. And they reflect the ideology expressed by those who waged their attack against the U.S. Capitol on Jan. 6. No, they are not curriculum, but they are a part of our history and have been a rallying cry for more than two centuries. And they are a part of our history that we must study, understand, contextualize and deconstruct.

Ultimately, the 1776 Report will have no demonstrable impact on our classrooms, our communities or our democratic republic. But it becomes the proper close to the social studies lessons of the past four years. As the next chapter of our American history is written, it is imperative that we apply those lessons to significantly improve the teaching and learning of American history. Our nation’s future depends on better understanding our past.