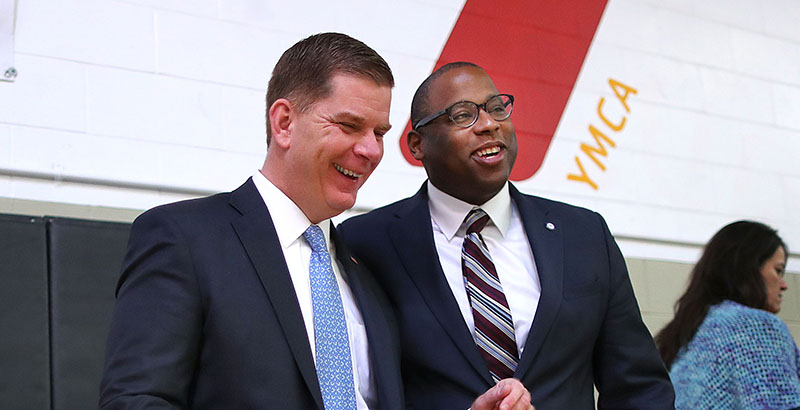 When the city of Boston reached terms with its teachers union on a new contract last month, Mayor Marty Walsh proclaimed it “good for our students, good for our teachers, and good for our district.”

Boston Teachers Union President Jessica Tang, just months after being elected to that role, celebrated “an affirmation to … collaborate for professional learning growth, for our educators and also our commitment to our schools and our students.” Set for a vote from the Walsh-appointed Boston School Committee tomorrow, the tentative agreement will soon become law.

But some local observers view it as a kludge that will need to be revisited almost immediately. And while the accord allows both sides to temporarily sideline some painful choices around labor and finance, Walsh’s standing with the teachers union and other educational issues have emerged as flashpoints in his ongoing campaign for re-election.

Though billed as a two-year contract, it is effectively a one-year pact, splitting a 5 percent salary bump over the 2016–17 and 2017–18 school years. Financial issues around the BTU’s 6,500 members — most notably the 87 tenured teachers who can’t find lead classroom positions but are nevertheless guaranteed a paycheck — were punted to the next round of talks.

The Boston Globe called it “a one-sided victory for the teachers, who received a solid pay increase but made no meaningful concessions.”

Sam Tyler, president of the fiscal watchdog Boston Municipal Research Bureau and a frequent critic of the BTU, agreed.

“It’s not a surprise that we’re disappointed with this contract,” Tyler told The 74. “We were hoping for stronger, bolder reform.”

Asked about the likelihood of achieving a long-term resolution, he replied, “If they can get 5 percent over two years for not a whole lot of reform, what will the union and the teachers expect for more significant reform? And will the city be able to fund that?”

Negotiations over what proved to be an interim deal stretched over an agonizing 18 months. During that time, the union has already elevated a new leader, and Bostonians will soon have a choice to do the same.

Mayor Walsh faces an election of his own this November, though few give four-term city councilor Tito Jackson more than a puncher’s chance of unseating the popular incumbent, who has been in office since 2014.

After serving as a spokesman for last year’s successful campaign to block Question 2, a ballot initiative to lift the statewide charter cap in Massachusetts, Jackson has dutifully repeated BTU talking points at his public appearances. Decrying thousands of student walkouts last year over threatened program cuts (Walsh points to over $150 million in new education funding since he took office), Jackson has also accused the city of gender bias in swiftly reaching new contracts with male-dominated police and firefighter unions.

If elected, Jackson would become the first black mayor of a city that has sometimes confounded traditional ethnopolitical loyalties. One poll last spring registered support for opening more charter schools at 81 percent for black parents and 86 percent for Latinos (though heavily minority precincts ultimately voted down Question 2 at similar rates as the rest of the city). Boston’s charters are regarded as some of the best in the country at boosting achievement among low-income and minority students.

In one further sense, the spirited city councilor seems an unlikely critic of expanding school choice: As a child in the 1980s, Jackson left behind more segregated, lower-performing public schools in the city to attend school in the affluent suburb of Brookline through Boston’s METCO program.

(The 74: For 50 Years, This Voluntary Busing Program Has Desegregated Schools 1 Family — and 1 District — at a Time)

The politics of education may also prove treacherous for Walsh, who came to public life as a union laborer but who also sits on the board of a Dorchester charter school. Though he describes himself as a “longtime supporter” of charters, he joined Jackson and much of the state’s Democratic establishment in opposing Question 2 last year, warning that too-rapid growth could lead to lower standards and district school closures. The measure was defeated by a 24-point margin.

Walsh’s own victory margin in 2013 was one of the thinnest in the city’s history, and the American Federation of Teachers unilaterally funded a massive advertising buy in the closing days that may have carried him over the finish line.

After abstaining from mayoral endorsements for over 20 years, the BTU made an 11th-hour plea to its members to vote for Walsh four years ago. Now his stance on their contract is being characterized by the Globe as “an attempt to contain any potential political fallout in a mayoral election year.”

“Particularly if you’re the mayor in a city where we have mayoral control of the school department, you don’t want to have contract or strike issues during a period when you’re running for office,” said Paul Reville, the former Massachusetts secretary of education and a professor at Harvard Graduate School of Education. “This particular mayor comes from the union movement. On the other hand, he’s strongly supported from many corners of the education reform community, and they’re expecting action.”

Along with several hoped-for but unrealized changes to learning time, hiring, and teacher evaluation, groups like Tyler’s Boston Municipal Research Bureau have insisted on a fix for the so-called “excessed pool” of instructors. The pool is made up of tenured Boston Public School employees who cannot find positions by the beginning of the school year. They are currently assigned to co-teaching roles in other teachers’ classrooms, but many have shown an unwillingness to apply for lead jobs even as they draw a full salary. Keeping these surplus personnel on the payroll is estimated to cost the district over $20 million during the period covered by the contract.

“To the School Department’s credit, there’s no rubber rooms here; they’re all in teaching environments,” says Tyler. “But the union has to recognize that there are some teachers that shouldn’t be in the classroom, and the highest priority ought to be to have a contract that supports quality, effective teachers.”

If he survives Jackson’s challenge to his left, the mayor may have a free hand to craft an agreement that pleases both his union allies and reform backers. But in Boston, mayoral terms last longer than labor peace; Walsh, still early in his tenure, is just the fourth elected in the past 50 years. Even a masterstroke of dealmaking could be just a prelude to more debates over charter schools, which bedeviled the late Tom Menino for decades. The five-term mayor originally enjoyed close relations with the BTU, but later accused then-president Stutman of sabotaging plans for new schools.

“I view this as just sort of making time for a more serious set of negotiations in the future,” said Reville. “But given how difficult it was to get to an agreement on this one, it’s not clear what we have reason to be optimistic about.”