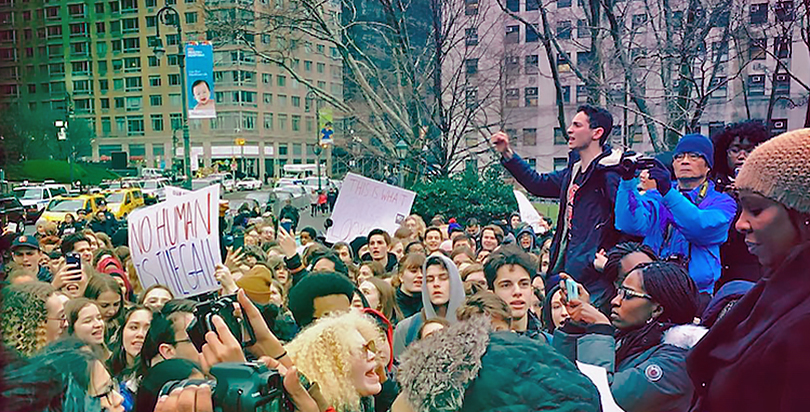 At Manhattan’s Foley Square, across from the United States Courthouse, student speakers rallied the crowd around hot-button issues ranging from student debt to the Betsy DeVos confirmation. But the crowd, consisting mostly of teens, was most energized by the perceived discriminatory overreach of the Trump administration’s order.

(The 74: Hailly Korman: I Was a Lawyer Volunteer at Dulles Airport When Trump’s Immigration Ban Took Effect)
“Everyone should have a fair shot at the American dream,” Niko, a student at the Jacqueline Kennedy Onassis High School for International Careers, told the 74. He said the president “[isn’t] allowing that to happen.” Draped in the flag of Mexico, where his grandparents are from, he called Trump “un-American.”

The organizer of the rally and march, Hebh Jamal, reminded students that they hold voting power for the future and that “to win, we need a nationwide student coalition.”
For many of the student protesters, participating came at a price — being marked absent for skipping school.
“Today, you have all decided to walk out of your classrooms. For many of us, this comes at a considerable risk,” Jamal said. “We have done this today because we realize these are not normal times. We cannot go to school, to class, to our exams as if things were normal,” she said, provoking shouts of “no” and cheers from the crowd.
After the rally, the students marched to 26 Federal Plaza, where the Federal Bureau of Investigation and U.S. Department of Homeland Security, including Immigration and Customs Enforcement, are located, chanting, “Let them in!” 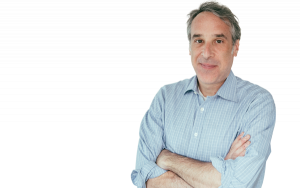 Jim is a documentary filmmaker from Brooklyn, N.Y. His feature film “End of the Century: the Story of the Ramones” premiered at Slamdance and the Berlin Film Festival and was released theatrically in 2005. PBS broadcast the film nationally on “Independent Lens” in 2006. As the director of Video at TIME.com, Fields produced numerous short documentaries on a range of topics from immigration to space and technology. His work has also been broadcast on VH-1, The History Channel, MTV and the Discovery Channel.