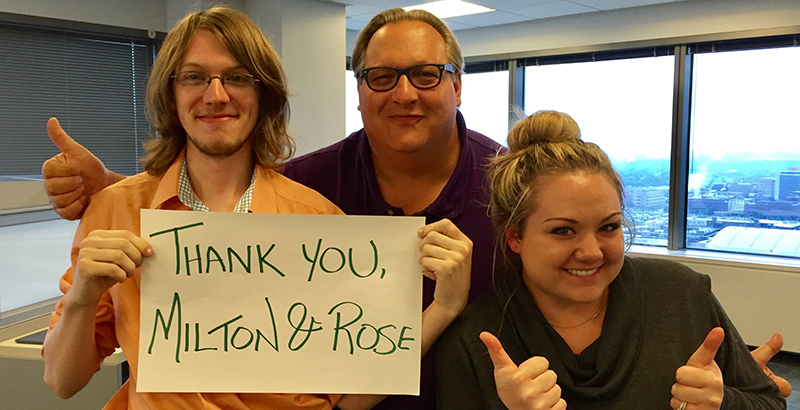 EdChoice CEO Robert Enlow with team members leading up to the 2016 rebrand of the Friedman Foundation for Educational Choice as EdChoice. (Photo credit: EdChoice)

David Osborne recently published a book in which he analyzed how several urban centers are reinventing K-12 education in ways that better meet the needs of families and students. At a recent stop promoting his book, Osborne said a quality K-12 system would include “good, healthy dynamics of choice and competition, and decentralization. And that’s what the 21st century system I’m arguing for would give us. And it’s not a theory, because we’ve got cities doing it. And it works.”

A system of choice and competition where power rests at the local level with those who are actually using the system? Amen, friend. We’ve been preaching the message that families know best for the 21 years our national nonprofit has existed to promote educational choice.

Osborne doesn’t actually want a robust system of choice that includes public, private, charter, online, home, and other schooling options — for all students. Instead, he wants a system that deliberately excludes many parents from the schooling type they consistently say they’d prefer if money were no object: nonpublic schools.

In his book, Osborne grudgingly seems to accept that vouchers could be a solution for lower-income families with no way out of schools that aren’t meeting their needs, but he wants to be the person who decides whether a student qualifies for help or whether they should pay their own way. He is unwilling to consider offering that opportunity — via the amount of K-12 funding allocated per student — to all families equally. And his motivation seems to be purely political, not based in reason. Moreover, he doesn’t want to extend his reasoning to traditional public schools or charter schools, which are not means-tested and open to all.

Osborne said as part of his book tour that “[w]e have a president and political party that would like to voucherize the entire education system. And that sounds attractive to many people on the surface, but would you really like an education marketplace that looked like the marketplace for homes or automobiles?”

The modern concept of a school voucher goes back to 1955, when Milton Friedman first described a system of public funding for a K-12 education system where the government didn’t have to be the only provider in town. In practice, educational choice programs in the United States actually predate Friedman’s writing: The first program was established in Vermont in 1869, and the concept goes back even as far as Thomas Paine.

The issue is one of the few areas of public policy where Democrats and Republicans currently can find common ground, and it garners widespread support among the millennial generation, especially within communities of color.

But let’s get to the heart of Osborne’s argument that Americans want access to options in every other area of their lives except with respect to private K-12 schools.

He uses as examples of choice the residential real estate market or the purchase of an automobile, both of which are very personal experiences that depend on a consumer’s specific needs and life experiences.

A single person with no children and a busy travel schedule may choose to buy a small condo in the city instead of a suburban home with a two-car garage and a yard. A mom of six is unlikely to purchase a Mazda Miata to haul her family around town. For other people, it might make more sense to bunk up with a roommate in a rented apartment, or skip the car and ride the bus.

The point is that we all make choices for different reasons, and we all want different outcomes as a result of those choices. The decisions a family makes regarding K-12 education are arguably more important than either of the examples Osborne mentioned: They will literally affect a child for the rest of his or her life.

When Osborne derides private school vouchers because he doesn’t agree with the current presidential administration, he is deriding opportunity for millions of American families who do not wish to be assigned to a school based on where they live any more than they’d like to drive a standard-issue government vehicle or be forced to live in government housing.

Robust educational choice seems “attractive to many people on the surface” because it is, in fact, a good idea at its roots. And it’s a good idea for all families, not just those arbitrarily selected based on Osborne’s assertions and assumptions about what they should be able to pay and what they should get in return.

Osborne is correct that our current system largely ensures that only those with means can access private K-12 schools, even though research overwhelmingly shows they do a better job educating and graduating students who are tolerant, engaged, and likely to succeed later in life. All students should have access to those opportunities, regardless of income or geographic location.

From our perspective, the conversation about reinventing America’s schools is incomplete if an entire sector of schooling is wholly or partially omitted from the reinvention process because it has become a political football or because a researcher or author says he or she knows what parents want better than they do. If the future of education truly is about leveling the playing field, let’s put families back in charge of the process and allow them to find schooling for their children that meets their needs, and let’s make sure they have every opportunity to find that best fit.