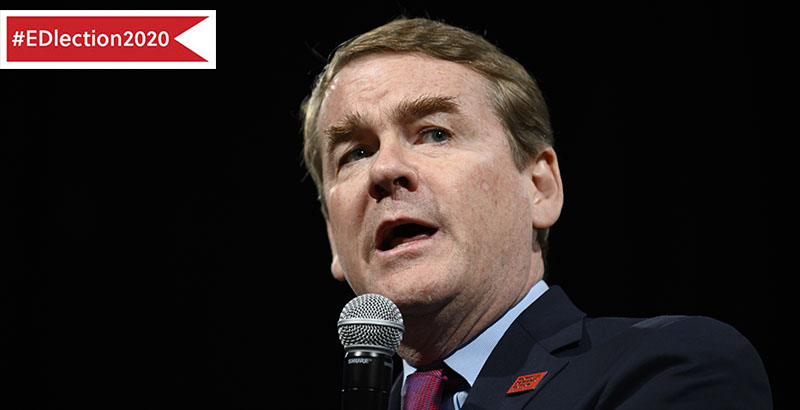 At Saturday’s Democratic Public Education Forum 2020, we got to hear a lot from presidential candidate Sen. Michael Bennet of Colorado, who hasn’t gotten much traction in the race so far. To be honest, I forgot he was still running. But his record as superintendent of Denver Public Schools means he has more direct, recent experience with K-12 issues than any of the other candidates. As he introduced himself at the forum, Bennet pointed out that he is the first former school district superintendent ever to run for president.

Bennet got attention for floating the idea of a six-day school week during the event, but his remarks on the key pillars of district innovation and improvement that characterized his time in Denver were much more interesting. As my Bellwether colleagues described in our 2018 project Eight Cities, Bennet’s leadership from 2005 to 2009 was a major turning point in the city’s educational trajectory, marking the beginning of a reform strategy that fundamentally changed the shape of the school system and contributed to notable gains in graduation rates and student achievement.

So how does Bennet view those district reforms now, and how does he propose to translate the lessons from Denver to the national level?

Bennet was pretty dismissive of the other candidates’ education plans and of federal-level rhetoric more broadly. When he was superintendent, he thought D.C. officials were just “mean,” but when he got to the Senate, he realized, “[Congress] is the farthest place in the universe from our schools and our classrooms. … People think they know what’s going on in schools because they might have attended one, like, 150 years ago, but they don’t actually have any idea what’s happening there.” In addition to supporting increased federal spending, especially on teacher pay and early childhood education, Bennet focused on ways the federal government could address underlying challenges by reducing child poverty.

His plans include child tax credits and other financial supports for families, and bringing together federal agencies to support children comprehensively so they could function in tandem as an unofficial Department of Children (maybe he got the idea from my colleague Sara Mead). This proposal was clearly informed by his experience leading an urban school district with high poverty rates, where children struggled with issues like homelessness and food insecurity that affected their experience in the classroom. He described the ideal role of the federal government as bringing in comprehensive supports, resources and innovative ideas to address child poverty so local leaders and educators could make a bigger educational impact.

Moderator and NBC News correspondent Rehema Ellis pushed Bennet on the teacher pay system he instituted in Denver, which included merit-based bonuses and higher compensation for working in tough-to-staff schools and subject areas. After the recent teacher strike there resulted in the retraction of most of the merit pay system, she asked, did Bennet think the system he helped to create was a mistake? He defended his approach, which brought Denver teachers’ salaries to the top of regional averages. The cause of the strike, he said, was the higher cost of living in Denver in the decade since he left office, necessitating an overhaul of teacher pay. In his answer, Bennet also touched on the role of pensions and gender in the history of teacher salaries: “Our entire system of how we pay teachers came from a labor market where we were discriminating against women … telling them if you stick with it for 30 years, you’ll get a pension.” He added: “We need to massively increase what we pay teachers.”

However, he hasn’t said whether that massive increase should differentiate by subject area, school need or teacher impact, as it did in Denver. If Bennet wants to direct more resources to higher-need students, as he said later in the forum, across-the-board pay increases aren’t the most efficient way to do it.

Bennet was one of two candidates asked about charter schools. Responding to a question from an educator from New Orleans — another of the districts profiled in Eight Cities — he emphasized the importance of oversight and authorizing. Bennet described charter schools as part of the solution in Denver but “not the be-all, end-all … we’re never going to scale success for all kids through charter schools.” For him, it was critical that charter school authorizing was under the sole control of the Denver school board, which set high accountability standards. But the National Association of Charter School Authorizers strongly recommends multiple authorizers in any jurisdiction and characterizes district-only authorizing environments as problematic, because not every district takes the rigorous and collaborative approach that Denver demonstrates.

Bennet touted Denver’s school performance framework, which he said holds district and charter schools to shared high standards, prioritizing student growth. His remarks made it seem as if academic growth is the only factor in the framework, but this isn’t the case. While it is a big component, the district also weighs metrics like grade-level proficiency, postsecondary readiness, family satisfaction and academic gaps. In fact, Denver’s framework includes so many metrics that it’s become a black box for educators and community members, prompting an overhaul. In his remarks on school performance frameworks and oversight, Bennet did not touch on a related issue: school closure. Framework results in Denver are a critical factor in closure or merger decisions, especially now that the city’s population boom has slowed. This is one of the most controversial uses for a performance framework, as Bennet saw when he closed the district’s lowest-performing high school over community objections. His successor as superintendent, Tom Boasberg, designed a new closure process in response.

Answering a question from a Chicago educator, Bennet said, “I have never seen a state takeover of a school district that’s worked well in America … we shouldn’t do it.” This makes sense from the position of a former Denver Public Schools leader: Denver is one of the few cities that has been able to make and sustain bold, systemic reforms under an elected local school board without state intervention or mayoral control. However, the city had a helping hand from the state at certain key points, with the Colorado legislature passing bills that allowed Denver to innovate and step outside the norms for district governance. State takeovers in places like New Orleans, Oakland, Newark and Camden paint a more complicated picture than Bennet’s brief remarks imply. Each of these cities saw increased academic performance and educational transformation under state control, along with different successes and challenges. But community backlash to state takeovers is a real concern regardless of test scores, especially when predominantly low-income, black and/or Latino city residents feel disenfranchised by state leaders and legislators.

It seems quite unlikely that Bennet will get to enact his plans as president, given his 1 percent support — or less — in recent national polls. But who knows? At one point, he was on the short list for secretary of education under President Barack Obama, and his name could come up again in a Democratic administration. Bennet is one of two presidential candidates, along with Sen. Cory Booker, who bring substantive educational leadership in an urban school district to the forefront, and it will be interesting to see how their voices and experiences impact the electoral conversation.

Bonnie O’Keefe is a senior analyst with Bellwether Education Partners, focusing on state education policy, accountability and pre-K to third-grade systems. Before joining Bellwether in 2016, she was an assessment specialist at the D.C. Office of the State Superintendent of Education.

Bonnie O'Keefe is an associate partner with Bellwether Education Partners in the Policy and Evaluation practice area.