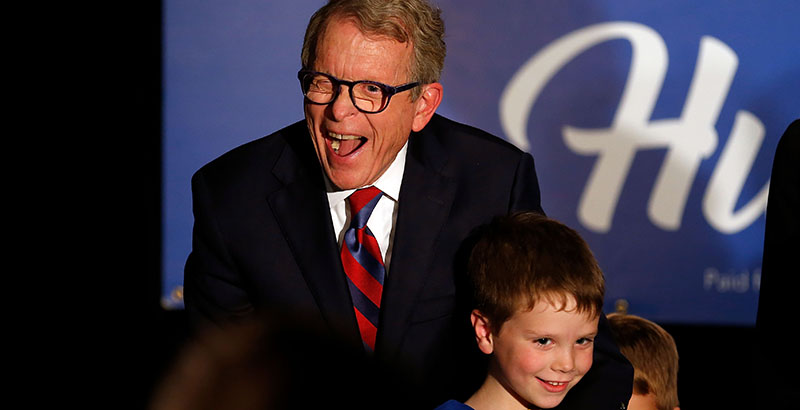 Ohio Gov. Mike DeWine campaigns with one of his grandchildren in 2018. (Kirk Irwin/Getty Images)

Ohio students will soon have more education options and nonacademic supports, thanks to the state’s new budget, which makes significant investments in education.

Included is $675 million in “student wellness and success funding,” which will be distributed on a per-pupil basis, with more money going to districts serving large populations of children living in poverty. Schools will get between $20 and $250 per student for fiscal year 2020, bumping up to $25 to $300 the following year. For high-poverty urban districts, that adds up to millions of additional dollars to spend on student wellness and social-emotional learning. Both districts and charter schools, which are known as community schools in Ohio, will receive the funding. Because most of the state’s charter schools are in urban areas, they will benefit more than the average district.

Schools can spend the money on a range of programs that address students’ nonacademic needs, such as mental health services, professional development related to trauma-informed care and cultural competence, services for homeless and child-welfare-involved students, and programming provided outside the regular school day. Other per-pupil funding levels will mostly stay flat at around $14,000 per student; roughly $6,000 of that comes from the state.

“We think that was a really important investment in terms of providing some of the nonacademic supports that kids need, especially kids from needier families,” said Aaron Churchill, Ohio research director at the Thomas B. Fordham Institute, a conservative think tank that advocated for many of the education-related budget items.

Recent research indicates that more spending can make a positive difference for students.

Under the new budget, high-performing charter schools whose populations are at least 50 percent “economically disadvantaged” students will receive supplemental funding. The money — $1,750 per economically disadvantaged student and $1,000 apiece for others — is intended to both reward high-performing schools and encourage them to grow, but there are no specifications for how schools can use it. Based in part on state report card grades, about 50 of Ohio’s more than 300 charter schools will be eligible for the award, Churchill told The 74.

Ohio’s charter schools receive about $4,000 less per student than traditional district schools, so this funding will narrow that gap a bit for high-quality schools. Advocates hope the incentive will also attract out-of-state networks to open schools in Ohio.

“I think we’re moving in that direction where there’s a nice balance” between accountability and incentives, Churchill said. “I think that will create a healthier charter school sector down the road, so we’re really excited about that.”

The budget also expands Ohio’s existing EdChoice private school voucher program for low-income families. Starting in the 2020-21 school year, all K-12 students will be eligible for private school scholarships if their families make 200 percent of the federal poverty level or less. Previously, the program had been adding one grade annually since the 2013-14 school year.

In another move that benefits charter schools, the budget ends a short-lived requirement that all teachers be “properly certified or licensed,” which advocates said made it hard for those who enter teaching through nontraditional routes. Under the new policy, teachers in charter schools will not have to meet that requirement, but it will remain for educators in district schools.

In addition to these changes, the new Ohio budget makes high school graduation requirements more rigorous, sets aside $20 million for districts to purchase school buses, and requires the state Department of Education to create groups to study the state report card and how Ohio’s early childhood programs compare with other states’ and the definition of “economically disadvantaged students” as it relates to school funding.