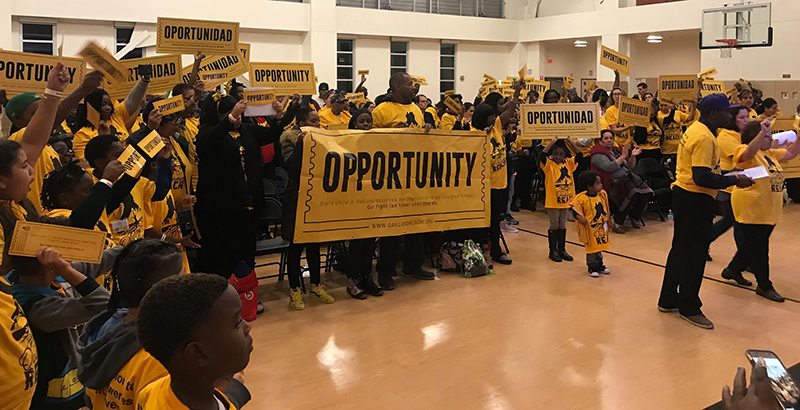 I’ve been asking myself for a long time, “Why is change in our schools so slow?” Because in this debate on how to improve education in Oakland, there’s a single sentence we all know exists in many communities, though no one will say it out loud:

For prominent voices in the debate over our schools — it’s an “outlook” that offers the privilege of patience. For parents without that kind of money, patience is yet another luxury we’ve never been able to afford. But now, the picture has gotten a little bit fairer. Now, some parents in some of the city’s most troubled schools have something better than an out. It’s called the Opportunity Ticket.

This March, the Oakland Unified School District board unanimously made the Opportunity Ticket a reality, after a yearlong fight by members of the organization I lead, The Oakland REACH. It provides enrollment preference in high-demand district schools for students enrolled in failing schools the district closes. Numerous school closures are on the horizon in Oakland, where district enrollment has fallen by thousands of students in recent years, and where a budget crisis is pressing. Many of those closures will be felt in neighborhoods where incomes and student performance are low.

In the past, Oakland’s enrollment preferences have been limited to neighborhood residency and having a sibling at the same school. If space remains after those preferences have been taken care of, it’s an open lottery citywide. In some of the best schools, few seats are up for lottery, as neighborhood students account for the large majority of available spots, And in that lottery, perhaps surprisingly, no preference is given to low-income students or students of color. Now, for some families, that’s going to change, because of the Opportunity Ticket.

In Oakland, far too many folks want to sit at make-believe tables of equity with Black Lives Matter signs in their windows and weekend walks to tour former Black Panther neighborhoods

The Opportunity Ticket is about fighting for our leg up. It’s about black and brown families saying we want our kids to compete, too. It’s about changing the odds in a game in which our families couldn’t even afford to ante up. It’s about saying clearly, “The same access and quality that’s good for your kids — guess what? — it’s good for ours, too.” It’s about putting, if not quite a thumb, at least a pinkie finger on the scale for opportunity in a city that too often claims to be about justice and too rarely delivers it.

In the coming months, we’re going to be working our butts off to ensure the Opportunity Ticket is implemented in a real way to support underserved communities. We’ve won a battle, but that battle needs to stay won. The forces of the status quo are not to be underestimated. In Oakland, far too many folks want to sit at make-believe tables of equity with Black Lives Matter signs in their windows and weekend walks to tour former Black Panther neighborhoods. Meanwhile, at the same time, they are taking full advantage of an “out” and applying to schools, such as charters, they are fighting to curb in policy debates.

Watch: ESSA Puts a Premium on Parent Involvement, These 6 Moms Are Leading the Way

We are inviting communities to look at what’s happened, and consider the potential of a lever like this one. The Opportunity Ticket is proof of the meaningful change that can happen when our system trusts parents, when we let parents lead the way.

In Oakland, we’ve too long bided our time and frustration as privileged parents espouse the kinds of change that should and shouldn’t happen in schools that looked nothing like the ones their kids attended. Now, at long last, families in some of Oakland’s poorest neighborhoods will have a genuine possibility of finding a spot in one of those sought-after schools.

It’s an important step for justice — and the beginning of a whole new kind of conversation.