Support The 74 and stories like this one. Donate Today!
News
New York

The number of homeless students in New York City stabilized in 2018-19 after ballooning over the past decade — but “dismal educational outcomes” for these young people continue to constitute a crisis, according to a report released Monday from Advocates for Children of New York.

The organization, using state-compiled data, reported 114,085 homeless students across both district and charter schools — about 1 in every 10 students in a system that encompasses 1.1 million students in district public schools and about 126,000 in charters. That’s enough to fill Yankee Stadium twice, or Barclays Center six times.

The count marks a modest 0.5 percent drop from the 114,659 record-high total recorded for 2017-18 and a divergence from the past 10 or so years, when totals rose steadily by thousands of students annually.  The number of homeless students in the city has spiked 70 percent since 2009-10, up from about 67,000 kids.

Homeless students are defined as those who live “in temporary housing,” which includes living “doubled up” with other families, or who stay in a shelter, hotel or motel. They are considered one of the most vulnerable student populations in the school system.

Other key data from the report:

● Of the total, more than 34,000 students were living in New York City’s shelters, and 73,750 were living “doubled-up” in temporary housing situations.

● 85 percent of these students are black or Hispanic.

● Homeless students make up 20 to 25 percent of the student populations in Local District 5 in Manhattan, Districts 9 and 12 in the Bronx and District 23 in Brooklyn.

● Districts across New York state reported a total 148,554 homeless students in 2018-19 — down from 152,839 the prior year — with Rochester, Hempstead and Syracuse school districts each reporting more than 1,600 homeless youth. This means that New York City public schools account for nearly 77 percent of the state’s homeless student population. The city is home to more than 40 percent of all New York state’s students. 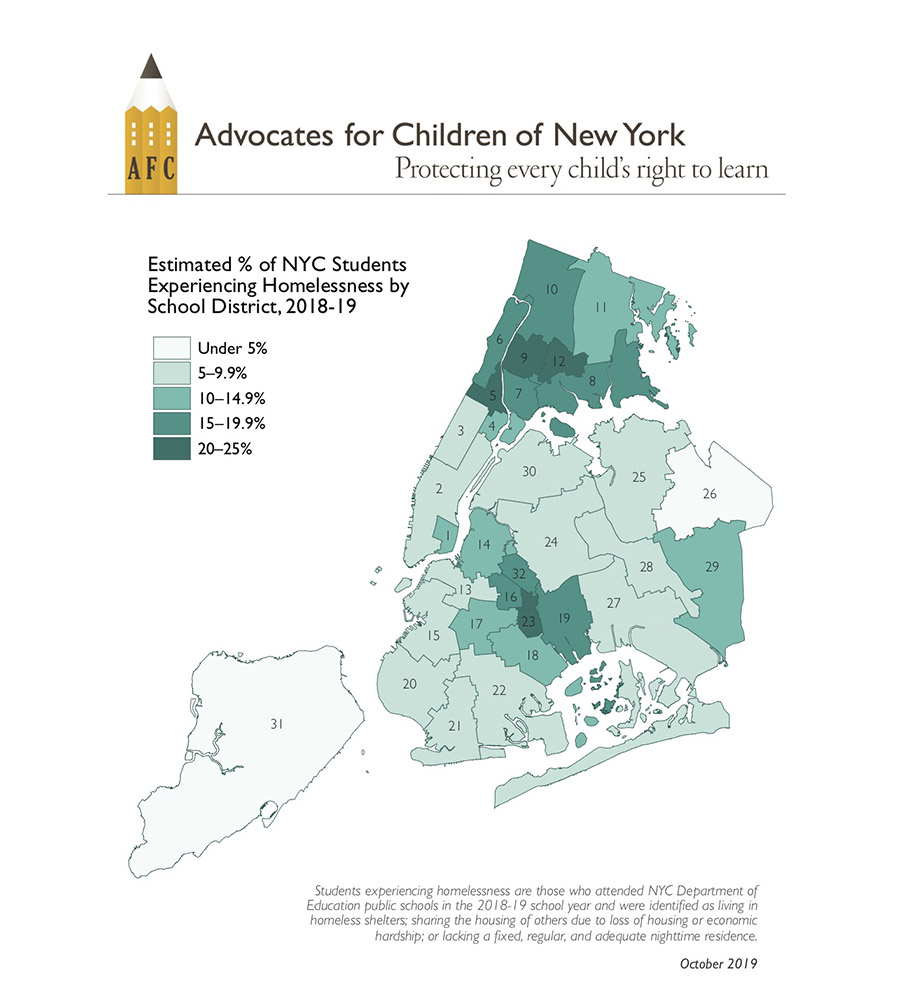 Advocates for Children of New York is “certainly glad to see that the number is flat,” policy director Randi Levine said on a call Friday. But that 1 in 10 students remains homeless, she said, underscores city and education officials’ responsibility to “pay attention to students who are homeless, and to increase resources and attention to this population.”

While outside factors like unaffordable housing and domestic violence are known contributors to student homelessness, the lack of a high school diploma is “the single greatest risk factor for homelessness among young adults,” according to the report.

Homecoming: After Three Years Living in a Shelter, Darius and His Mom Get Apartment of Their Own

Homeless students often face many barriers to obtaining that diploma, however. They regularly confront uncertain or unstable home environments, school disruptions and emotional trauma that can hurt their standardized test scores and spur higher dropout rates. On state exams, homeless youth’s math and English proficiency falls about 20 percentage points below the districtwide average. Only about 56 percent of those who are homeless at some point during their high school career graduate.

Advocates for Children of New York does credit Mayor Bill de Blasio’s administration and the Department of Education for taking “some positive steps” to support homeless students in school. There have been new leaders appointed to serve this population, such as Deputy Chancellor of School Climate and Wellness LaShawn Robinson, Levine said. In the past year, the city — albeit with outside pressure — increased the number of “Bridging the Gap” social workers from 69 to 100 and hired 100 community coordinators in schools with high numbers of homeless students. Under de Blasio’s administration, K-6 students living in shelters also receive bus service, and more of these youth are enrolling in pre-K, according to the report.

As the city works to expand school resources for homeless students, it’s simultaneously tackling a citywide epidemic. In the past week alone, de Blasio’s administration took heat from critics for a little-known city program that sends homeless families to other cities, and for its homeless counts, which advocates say inaccurately portray the scope of the problem. While some metrics suggest progress — population growth within city-run shelters is reportedly slowing, for example, increasing by less than 2 percent since 2016 — de Blasio continues to face pressure from advocates for more affordable housing options and resources.

De Blasio reiterated the city’s support of homeless youth to The 74 at a press conference on the first day of school in early September.

“There was not a particularly clear strategy in our schools [in the past] for addressing homeless kids,” he said. “Now, we provide a whole lot of extra support to schools that have a substantial number of homeless kids. … It is about taking the initiatives we started and deepening them and making them more effective.”

Advocates are eagerly waiting for those newer supports to yield tangible results.

“We need to see the city translate the supports to educational outcomes,” Levine said. “Now the harder work begins.”

NYC’s First Girl Scout Troop for Homeless Girls Is a Source of Love, Support, and Fun for Young Women in Need — & Inspired One in Chicago, Too