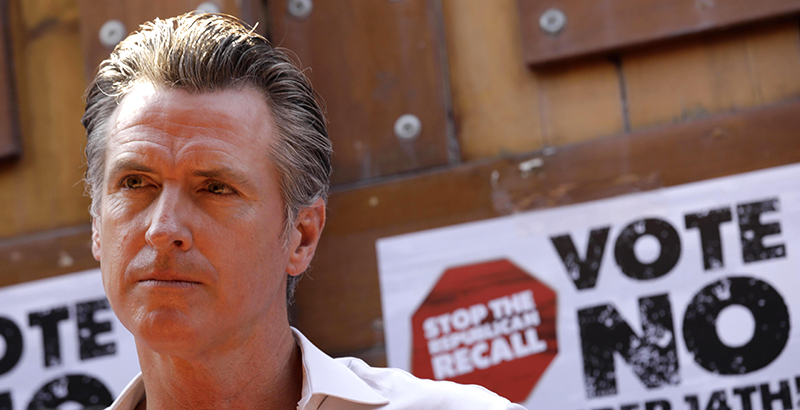 California Gov. Gavin Newsom decisively beat back a recall effort Tuesday, as almost two-thirds of voters chose to keep him in office for the remainder of his first term.

While mail-in votes await to be counted, the race was called for the no votes. Republican Larry Elder, the frontrunner to replace Newsom if a majority of voters had cast ballots for removing him, received 47 percent.

In mid-summer, opposition to Newsom’s pandemic restrictions on schools and businesses appeared to be strong enough for the recall to succeed, but a push to fend off the effort intensified in recent weeks with support from Washington. On Monday, President Joe Biden campaigned for Newsom in Long Beach, calling Elder “the closest thing to a Trump clone that I’ve ever seen in your state.”

California Gov. Gavin Newsom has sometimes been on the opposing side of the state’s large charter community, signing legislation that added roadblocks to launching and expanding schools.

But that doesn’t mean charter leaders are ready to vote him out. Margaret Fortune, who leads a network of schools serving mostly Black students, called the Sept. 14 recall disruptive.

“This moment, when we are in the midst of a pandemic that just won’t quit and when parts of the state are on fire, is not the right time to create chaos in state government,” Fortune said.

Launched by a former sheriff’s office sergeant prior to the pandemic, the recall effort picked up steam after Newsom attended a large, not-socially distanced dinner with lobbyists at a fancy Napa Valley restaurant in November despite the states’ restrictions on social events. But since then, he has signed a state budget that includes historic levels of funding for schools and earned the teachers unions’ support for a statewide COVID-19 vaccine requirement for school employees. Even so, over 40 challengers — a slate that includes a conservative radio talk show host, Olympian and reality TV star Caitlyn Jenner, and a wealthy businessman who lost to Newsom in 2018 — qualified as replacement candidates.

Gexin Tang of Irvine, California, was among the supporters of the recall and candidate Larry Elder who attended an Aug. 21 rally in Rowland Heights. Elder is leading in the polls to replace Gov. Gavin Newsom if he’s recalled. (Irfan Khan / Getty Images)

Their success could rest a lot on attitudes about education — on issues from reopening to mask mandates and new quarantine rules enacted in response to new outbreaks.

The ballot asks two questions: Should voters remove Newsom from office, and if so, who should take his place? Democrats on the list argue that the party needs a backup plan if the recall is successful. It wasn’t clear until July that Newsom could be vulnerable, but in recent days his chances of remaining in office have improved.

The latest polls show the campaign to keep Newsom leading over the campaign to remove him by a margin of 8 percentage points. Among the candidates running to replace him, conservative talk show host Larry Elder is out in front with 24 percent of the vote, followed by Democrat Kevin Paffrath, a 29-year-old real estate developer and YouTuber, with 10 percent.

Under the rules, a candidate with as little as 20 percent of the vote could become governor if more than half of voters choose yes on the recall.

Bruce Fuller, a sociology and education professor at the University of California, Berkeley, cites half a million new preschool slots and an increase in per-student spending that puts the state above the national average among the “huge wins for California’s children and families” under Newsom.

“None of the governor’s 46 challengers have put forward clear plans for buoying middle-class families or lifting our schools,” he said. “Dashing Newsom’s policy progress would only hurt the state’s families and future prospects for their children.”

‘Fighting for our kids’

Supporters of the recall, however, argue that the state’s slow pace toward reopening schools in the spring and a rocky back-to-school season this fall will be on many voters’ minds — “especially parents who are frustrated by how district and union leaders have responded to the pandemic,” said Aaron Garth Smith, the director of education policy at the Reason Foundation, a libertarian think tank.

Emily Diaz, a San Diego parent, is among those who say the pace of reopening has influenced her opinions as a voter.

“It has shifted how I view the world and where I thought the good guys were,” she said. “I do have a hunch that there are a lot of parents that really had our eyes opened when we were fighting for our kids to go back to school.”

“We’ve seen Kiley fight for us,” said Jonathan Zachreson, who founded the reopening group. “When I realized the teachers unions were influencing the governor, that’s when I said, ‘We need to support the recall.’”

The California Teachers Association endorsed Newsom when he ran in 2018, contributing over $1 million toward his campaign, and they’re strongly opposed to the recall. While the governor could have temporarily suspended local union contracts to force schools to reopen, he didn’t, leaving districts to negotiate with their unions when students could return.

Kiley said he thinks the fact that many students missed a year of in-person learning is a huge factor in the election, as well as what he called “onerous” reopening policies, such as universal masking and “excessive quarantining of healthy kids.” In the Los Angeles district, 6,500 students missed one or more days during the first week of school because they either tested positive for COVID-19 or came in contact with someone who did. Several other districts across the state are sending students home because of outbreaks as well.

“We need to get our schools functioning in a normal way again,” Kiley said. “We need to bring some sanity to it all.”

Another chaotic return to classrooms could draw more attention to private school choice — a policy that has never gained traction in California. There are currently two efforts to put an education savings account initiative on the November 2022 ballot. Kiley proposed a grant program for families’ to fund at-home learning costs with private donations, but it didn’t go anywhere.

State data shows a loss of 160,000 students in public schools last year, with many leaving for charters and homeschooling. “Policymakers haven’t given families any options,” Smith said, “while states such as West Virginia, Arizona, and Florida have worked to make education dollars more flexible.”

Cox and Elder — who voiced admiration for former Education Secretary Betsy DeVos during a recent rally — are also among those who say they would expand school choice if elected.

During two debates so far, which Elder skipped, the other Republican front runners pledged to reverse Newsom’s statewide mask mandate in schools, saying they would allow local districts to decide. 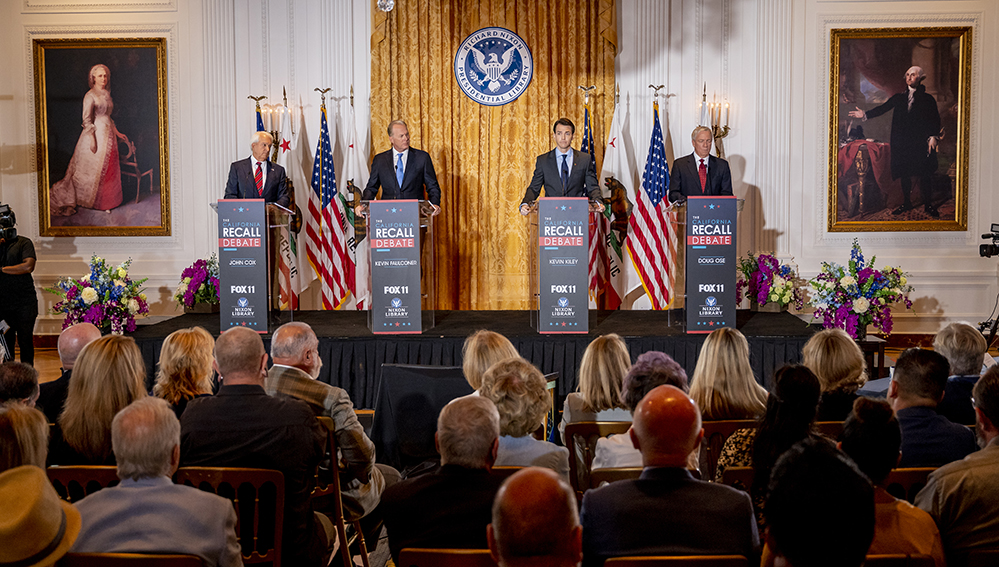 The chance that Elder or any other candidate with less than a quarter of the vote could become the next governor of a state with the fifth largest economy in the world prompted a lawsuit in federal court last month. The plaintiffs argue the recall election is unconstitutional because even if 49 percent of voters choose to keep Newsom in office, the victory would go to a candidate with a much smaller number of supporters. They want Newsom’s name added to the list of possible replacements or a new recall procedure.

But voters have already received ballots in the mail, and those in favor of the recall are “just following the process,” said Fortune.

It’s one she’s been through before.

Fortune served as education adviser to former Gov. Gray Davis when voters recalled him in 2003 and chose actor Arnold Schwarzenegger instead. The difference between then and now, she said, is that Schwarzenegger assembled a high-profile transition team that included both Democrats and Republicans with past government experience.

She doesn’t have confidence that any of Newsom’s challengers could “stand up a government.”

Another contrast to 2003 is that a higher percentage of voters chose Schwarzenegger than chose to keep Davis in office — 49 to 45 percent.

“There’s virtually no chance of that happening this time,” said Ted Lempert, president of Children Now, an advocacy organization, and a former Democratic state assemblymember. He added that the recall hasn’t been like a normal gubernatorial election where there would be a “robust discussion about education.”

Whether Newsom can prevail largely depends on turnout, Fortune said.

“There’s an enthusiasm gap, where Republicans are more energized than Democrats,” she said, but agreed with Lempert that those who want to challenge Newsom’s record on education can wait until next year when he’s up for reelection. “That’s what November ‘22 is for. It’s right around the corner.”

Submit a Letter to the Editor
September 7, 2021