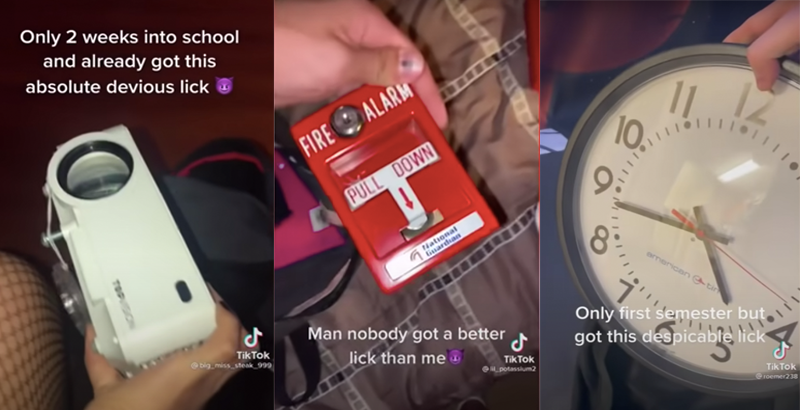 Students display equipment they've lifted from their schools, including a projector, fire alarm and clock (YouTube)

A new TikTok trend that has turned students into clout-seeking kleptomaniacs may be nothing more to them than a “devious lick” — a successful theft for social media consumption — but for cash-strapped schools it could be a serious blow.

In the last several weeks, a slew of videos have flooded TikTok showing students vandalizing and stealing paper towel dispensers, printers, projectors, microscopes and even urinals. In one clip, a student is shown pilfering a fire extinguisher from a classroom right in the middle of a lesson. The video-sharing social media platform is known for copy-cat posts by young people hoping to score their 15 minutes of fame.

The shenanigans come as K-12 campuses struggle to reopen amid a pandemic that left many of them reeling financially. Keeping school facilities clean and in good working order has been a stretch for district officials in numerous parts of the country long before COVID or viral videos. In Washington, lawmakers have proposed a federal grant that would distribute some $82 billion for school infrastructure, and a massive $3.5 trillion spending bill, which is still being negotiated, could earmark billions more for school construction projects. Such spending is critical to modernize America’s aging classrooms, new research suggests.

To Bryn Hennessey, a 17-year-old senior from Vermont, many of the TikTok videos seemed silly at first, she said. But then she realized the impact the phenomenon was having on students’ learning environments. She said the boys bathroom at her high school was recently closed for repairs after students smashed ceiling tiles and stuffed them into the toilets and vandalized the sinks.

“It’s just not a place to vandalize like that, especially in a bathroom that is a facility that everyone needs to use everyday,” Hennessey said. “The janitors do a really, really great job and it’s actually sad to have them walk into the bathroom and see all of this wreckage everywhere.”

In response to the trend, districts across the country have warned parents that students could face discipline for damaging school property. At Clark-Pleasant Middle School in Greenwood, Indiana, educators noted in a Facebook post that they were taking “additional measures to address this inappropriate behavior” after restrooms were thrashed. In Diboll, Texas, the district announced that a student had stolen a stapler from a teacher and another one had swiped a soap dispenser from a restroom. Officials said that students could be subject to “disciplinary consequences and monetary restitution” for participating in this “destructive challenge.” The Van Buren, Arkansas police department went a step further, announcing that students could be “arrested for theft of property,” and urged teens to consider “the consequences of these actions, and the effect it can have on your school career.”

TikTok, the Chinese social media platform that’s hugely popular among children and teens, announced that it was removing content that violates its policies — and pleaded with students to “please be kind to your schools & teachers.”

We expect our community to create responsibly – online and IRL. We’re removing content and redirecting hashtags & search results to our Community Guidelines to discourage such behavior. Please be kind to your schools & teachers. pic.twitter.com/mIFtsYwFRb

Districts spend about $110 billion annually on building maintenance, operations and construction, according to a recent State of Our Schools report by the 21st Century School Fund, a nonprofit that promotes school facilities improvements. Yet nationwide, there’s a $46 billion annual funding shortfall between that investment and the levels needed for the maintenance, operations and periodic capital improvements necessary to ensure the country’s “good stewardship of its schools.” That underinvestment was particularly pronounced in rural towns and those in low-income communities, researchers found. Years of data suggest that student’s learning environments affect academic outcomes.

Predating TikTok becoming an online sensation, the 21st Century School Fund urged students to submit pictures of their schools — both the good and bad — to raise awareness about national inequities in school facilities and how many students were forced to learn in classrooms in a state of disarray. Unlike the “devious lick” trend, the project had students using their photography skills in a positive way to document challenges in their schools, said Mary Filardo, the group’s executive director.

“Maybe we could get students capturing this, rather than stealing stuff!” she wrote in an email.

A similar effort is underway in Philadelphia, where decrepit school buildings have been the subject of damning newspaper investigations and parent outrage. For the last several years, the Philadelphia Federation of Teachers, the city teachers union, has encouraged educators and students to submit photographs and other information about infrastructure issues through a mobile app with the goal of encouraging district leaders to take action. The PFT Healthy Schools Tracker Mobile App has received more than 3,000 submissions across 165 schools highlighting issues like water damage, mold, peeling paint and pest droppings.

With the help of school staff who documented settings and took samples from inside some of Philadelphia’s most rundown schools, a series of local newspaper investigations in 2018 revealed how students were being exposed to unhealthy lead levels, asbestos and other toxins — dangerous conditions that were perpetuated by a long pattern of neglect. In one school, students reported frigid classrooms without heat, burst pipes and pest infestations — including a cockroach that was observed crawling out of a milk carton.

Jerry Roseman, an environmental scientist for the teachers union who manages the app, spends much of his time evaluating potentially hazardous conditions within Philadelphia’s public schools. Across the city, those school buildings are still “largely inadequate by any assessment,” he said.

Rather than contributing to the problem through theft and vandalism, Roseman urged students to be part of the solution by documenting the dire need for repairs through services like the Philadelphia app.

Stealing and destroying school property for the sake of internet notoriety “increases the deficiencies already there,” he said, and could compound their future degradation. If a school is repeatedly vandalized, maintenance staff could halt future repairs — a reality that he said is already true in many places. “You have thermostats that don’t exist, you have bathroom conditions that are atrocious, you have drinking water outlets that are trashed, and you’ve got lots of broken, missing stuff.”

When these issues are caused by vandals — whether capturing their malicious mischief on video or not — he said, conflicts brew between custodial staff and educators who are accused of failing to keep kids in line.

“It can really play into and accelerate the broken windows syndrome,” he said. “You know, ‘One toilet is broken, the handle is missing, I’m going to kick in the other two.’”