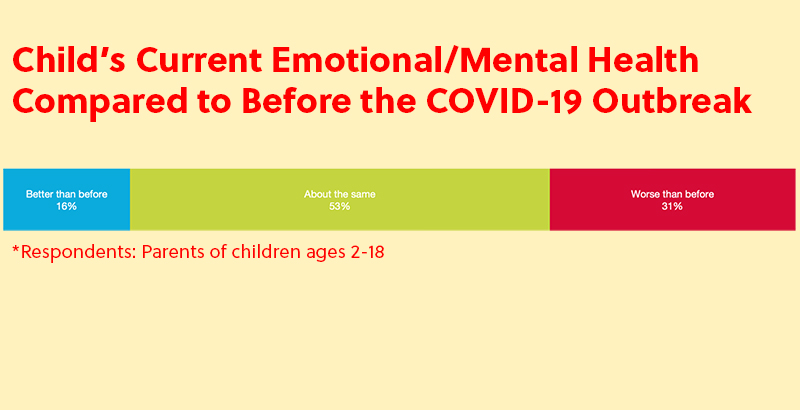 Nearly two-thirds of parents say their child has recently experienced mental or emotional challenges such as anxiety, depression and even suicidal thoughts, according to a new national survey on student well-being during the pandemic.

Yet amid growing concern that the pandemic and its widespread disruptions to schools could have a devastating, long-lasting toll on students’ mental health, the new Jed Foundation survey offers some optimism. While the survey offered critical insight into the challenges youth have experienced over the last year, it also pointed to a remarkable amount of resilience among young people. In fact, just a third of parents said their child’s emotional health is worse than it was before the COVID-19 outbreak. More than half of parents said their child’s mental health is the same as it was before the pandemic, and 16 percent said that it has actually improved.

That finding caught Sara Gorman, JED’s director of research and knowledge dissemination, off guard. While the survey findings make clear that schools must prioritize youth mental health as students return to classrooms, they weren’t nearly as worrisome as she had predicted. JED, a nonprofit, is focused on the mental health of teens and young adults, working with schools and colleges on youth suicide prevention.

“What we were expecting to see was something much more significant,” she said. “That really spurs for us an interest in studying further how this resilience develops and what methods these students have been using to keep themselves mentally afloat.”

The new data come amid a pitched debate about whether to reopen schools during the pandemic — a move the Centers for Disease Control and Prevention has endorsed in places with low to moderate spread of COVID-19 so long as students wear masks and follow other public health recommendations. Preventing a potential uptick in youth suicide rates has also been pitched as a reason to reopen schools quickly.

Such a reality played out in Las Vegas, Nevada, where officials cited a spike in youth suicide deaths as motivation to reopen campuses. But mental health experts say a delay in comprehensive, real-time mortality data has hindered officials’ ability to get a clear picture of the problem. Suicide, the second leading cause of death for youth 10 to 24 years old, was already on the rise before the pandemic.

Lisa Horowitz, a staff scientist and clinical psychologist at the National Institute of Mental Health, called the country’s youth suicide rate “an incredible public health crisis,” but the pandemic’s effect remains unclear, though there are reasons to be concerned.

“The truth is that we don’t have suicide statistics yet for 2020,” she said during a recent webinar. Yet many of the pandemic’s effects, like social isolation and the loss of in-person connections, “can exacerbate a lot of the risk factors for suicide.”

Students were far more likely to report having mental health challenges during the pandemic if a family member or friend had contracted the virus, or if a parent lost work because of the unstable economy. Meanwhile, the parents of students in middle school were most likely to observe mental health issues in their children, a finding Gorman theorized was the result of social deprivation.

“The brain development at that time makes them want to be more social, and a lot of development happens over those couple of years,” she said. “Part of the reason they’re struggling more, they’re basically getting a signal from their brain that they’re supposed to be with other people their age.”

The online survey included a national sample of 2,075 parents and 899 teens 13 to 18 years old, two-thirds of whom were not attending school in-person full time. The survey was conducted in September and October, early in the current school year and shortly before the presidential election.

As the national infection rate drops, schools begin to reopen and millions receive the vaccine, Gorman said students’ mental health has likely improved some, but she warned that the effects could be long-lasting. For some, the “fallout” of pandemic-induced trauma could manifest even after the current crisis ends.

The survey results offer important lessons for policymakers, Gorman said. Previously, “people were just kind of assuming that mental health must be really bad during the pandemic and that we have to get students back to school as quickly as possible,” she said.

But the results suggest that the pandemic itself is more to blame for students’ mental health issues than its havoc to schools. While 88 percent of students said they were concerned about how long the pandemic would last and 78 percent were concerned about contracting the virus, 67 percent of teens said they worried about falling behind academically and 61 reported concern about their mental health.

These findings, Gorman said, suggest that young people have been resilient during the crisis “because if students were really distressed, they might be focused on their own mental health and they were really more focused on the global situation.”

Still, as students return to schools in many cities, Gorman said it’s important that educators assess young people’s mental health and act swiftly when youth are in crisis. To help guide that work, JED has partnered with more than a dozen schools across the country to implement a suicide prevention initiative that aims to identify students at risk and provide mental health care to those who are struggling. Looking beyond this past year, the pandemic won’t be the last crisis that students experience in their lives.

“We can’t prevent any of those things from happening in many cases,” she said, but schools can teach kids how to regulate their emotions during times of intense stress. “We hope that schools see more and more how important that is because that’s what’s going to really help students when these kinds of things inevitably recur.”