Meet Fanny Jackson Coppin: Born Into Slavery, She Graduated From College, Became a Teacher — and Lifted Up Generations of Black Americans 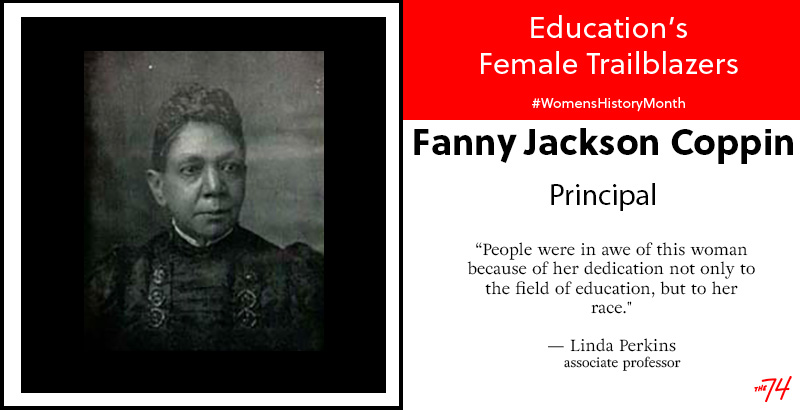 As Fanny Jackson Coppin sat through her college classes in the 1860s, she wasn’t just thinking about the Greek lessons or the math problems. As the Civil War raged on, she was thinking about how every triumph or failure in her education was a reflection on her entire race.

“I never rose to recite in my classes at Oberlin but I felt that I had the honor of the whole African race upon my shoulders,” she wrote in her autobiography, Reminiscences of School Life, and Hints on Teaching.

Freed from slavery as a child, Coppin believed in the power of education to lift up black Americans. She dedicated her entire life to this mission, becoming one of the first black women in the nation to earn a college degree and leading a school that would educate African Americans regardless of income.

Coppin’s work was critical at a time of extreme racial tension, as schools serving white students refused to open their doors to recently freed blacks seeking educational opportunities — beginning battles around segregation in education that rage to this day. But at its foundation, she was challenging long-standing beliefs inculcated by whites about the intellectual inferiority of blacks.

“For it was one of the strongest arguments in the defense of slavery, that the Negro was an inferior creation; formed by the Almighty for just the work he was doing,” Coppin wrote. “It is said that John C. Calhoun made the remark that if there could be found a Negro that could conjugate a Greek verb, he would give up all his preconceived ideas of the inferiority of the Negro.”

Coppin was born into slavery in 1837 in Washington, D.C. When she was still a child, her aunt bought her freedom for $125 and sent her to live with another aunt, first in Massachusetts, then in Rhode Island. After attending Rhode Island State Normal School and taking instruction from a private tutor, Coppin enrolled in 1860 at Oberlin College in Ohio — one of the first white schools to accept black students — so she could become a teacher. Her aunt and her church helped pay for her tuition.

At school, Coppin volunteered to teach literacy classes for blacks newly freed from slavery. For her, this work took on a religious devotion.

“I felt that for such people to have been kept in the darkness of ignorance was an unpardonable sin,” she wrote.

When Coppin graduated in 1865, she was among the first wave of black women to obtain a college degree in the United States. (Mary Jane Patterson, a fellow Oberlin alum, is thought to have been the first, in 1862.)

Even as a student teacher, Coppin was renowned for her abilities, said Linda Perkins, an associate professor at Claremont Graduate University. Coppin was recruited before graduation to teach at the Institute for Colored Youth, a school run by Quakers in Philadelphia.

“She was able to make students feel that no matter what level they were, that they could learn,” Perkins said.

No One Would Hire Her. So She Wrote Title IX and Changed History for Millions of Women. Meet Education Trailblazer Patsy Mink

After just four years, Coppin was promoted to principal, a position she held for nearly 40 years. During that time, she eliminated tuition so poor students, rather than just children of Philadelphia’s wealthy families, could attend. When the Quakers wouldn’t approve construction of a dormitory, she used her own money to pay rent for students who had recently moved to the city from the South.

Racial tensions were growing in Philadelphia during this time, as both freed blacks and immigrants moved into the city. One of Coppin’s educators, O.V. Catto, was killed when he and two other men attempted to vote. This underlined Coppin’s mission to educate her students to participate in civic society and value racial solidarity. Once, Coppin told her student teachers that they should be willing to take a pay cut if it meant being able to reach the most impoverished students, and she added trade classes to the school to give her students more robust opportunities.

“Black people understood that education was power,” Perkins said. “Education was the route to freedom. That’s the one thing white people can’t take away from you.”

Coppin retired in 1902, and at age 65 she began doing missionary work in Cape Town, South Africa, with her husband. Eventually, she returned to Philadelphia before her death in 1913.

Perkins interviewed Coppin’s last living student, who told Perkins that the students in Coppin’s care felt respect for their principal every time she walked into a room. “She impacted everybody she taught,” Perkins said. “People were in awe of this woman because of her dedication not only to the field of education but to her race. She believed education would free black people.”