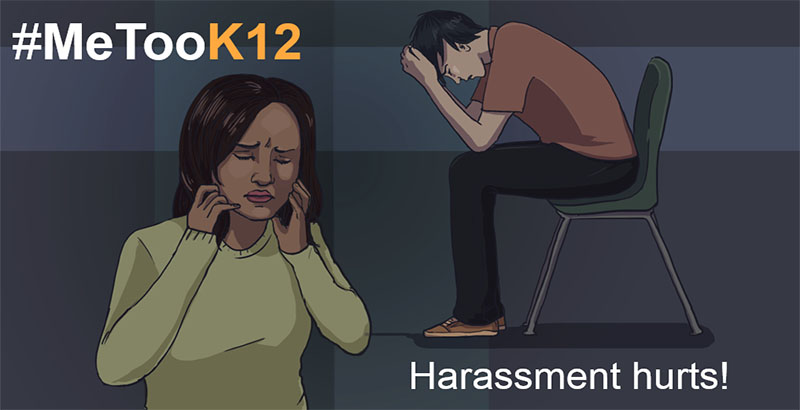 A version of this essay first appeared on the Ms. magazine blog.

On New Year’s Day 2018, Stop Sexual Assault in Schools (SSAIS) launched the #MeTooK12 campaign in partnership with the National Women’s Law Center. The campaign harnesses the awareness and urgency generated by the #MeToo movement to spotlight the widespread sexual harassment that students experience before entering college or the workforce.

On this second anniversary, we look at the campaign’s impact to date and where it’s headed.

Shortly after the launch, #MeTooK12 was featured in major national and international news outlets. Reporters interviewed K-12 parents, counselors and educators, and gave students an opportunity to share their experiences. Despite statistics showing that most K-12 students experience sexual harassment before graduation, these journalists noted that the issue has been widely overlooked, dismissed and normalized.

Publications for educators, such as Education Week, The 74, NEA Today, and ASCD Express cited #MeTooK12 as evidence that schools could no longer ignore students who don’t want to be shielded or sidelined from conversations on topics that affect them. Students expressed a desire to learn about dating violence, hazing, sexting and consent, agreeing that waiting for college to address these subjects is too late.

At its annual virtual conference, the American Federation of Teachers sponsored a special keynote session, “#MeTooK12 and #MeToo: What does it mean for schools?” SSAIS participated in the webinar and contributed #MeTooK12-themed educational materials to the AFT Share My Lesson collection, available to all educators.

School principals and district administrators learned about #MeTooK12 in professional journals such as District Administrator, Campus Safety Magazine and K-12 Insight. There are online reports about schools conducting assemblies on sexual harassment, and several education law firms reference #MeTooK12 to emphasize schools’ Title IX responsibilities. Families reading the parenting magazine Seattle’s Child learned about the campaign in the context of how the proposed changes to Title IX rules would affect students who report sexual harassment.

Digital media outlets that target youth and young adult audiences also ran features on #MeTooK12. Now This Her devoted an entire segment to #MeTooK12; Scholastic Choice, Seventeen, Teen Vogue, Bustle, Babe and others reported on students who live with persistent sexual harassment and their frustration with the indifference with which schools react to their complaints.

Student journalists in Santa Fe, Los Angeles, Cincinnati, and Elkhorn, Indiana, wrote articles for their school newspapers. A recurring theme was how #MeTooK12 had stimulated important conversations about sexual harassment in schools where previously the topic had been studiously avoided.

Academics drew connections between #MeTooK12 and high-profile national events such as the Brett Kavanaugh Supreme Court confirmation hearings. One study explained how media coverage of the Kavanaugh proceedings influenced discourse about sexual harassment in K-12 schools. Another encouraged student participation in local decision-making about teaching sexual harassment and personal boundary setting. The campaign even inspired a Maryland state legislator to propose a law requiring that sexual consent be taught in schools. Four other states introduced similar bills.

Advocacy groups said #MeTooK12 reflects public recognition that gender-based harassment and discrimination must be addressed before students enter college and the workplace. Articles in Ms. Magazine, Domestic Violence Network, the National Center on Sexual Exploitation and America’s Promise Alliance encouraged students and parents to act as change agents for shaping school culture, “to the point where consent is the norm, bystanders step in and everybody’s job is to make sure victims feel like they can come forward and hold perpetrators accountable.”

In sum, #MeTooK12 has kindled conversations in disciplines as diverse as sexual assault prevention and response, social work, gender equity, child development and educational leadership, as well as many others. The campaign’s achievements include:

● Amplifying the voices of students who had been victimized by peer and staff harassment;

● Engaging a diverse group of constituencies around the need to address systemic gender discrimination in K-12 schools;

● Broadening the #MeToo movement to encompass the antecedents/roots of workplace sexual harassment;

What’s next? Although social media campaigns often have a diminishing impact over time, we see #MeTooK12 evolving from building awareness to stimulating policy reforms/solutions in individual schools, districts, education agencies and legislatures.

We envision #MeTooK12 maturing from a rallying cry to a watchword for school-community partnerships aimed at enhancing K-12 student safety and gender equity in all schools. For example, Portland, Oregon, Public Schools is building coalitions inclusive of parent and student voices under the #MeTooK12 banner, which is widely promoted in district communications.

It’s a model that other districts should adopt. They must work to ensure their Title IX policies are transparent, equitable and enforced, and that staff is trained to respond fairly and compassionately to reports of sexual harassment and violence. As one high school student observed, “The start of ‘a new day’ can only happen once discourse starts. And now that it has, now that all of this is being taken seriously, I think that anything is possible.”

Joel Levin, Ph.D., is co-founder and program director of Stop Sexual Assault in Schools, a nonprofit addressing rampant K-12 sexual harassment and assault. For a categorized list of publications and resources referencing the #MeTooK12 campaign, see #MeTooK12: Impact and Reach.