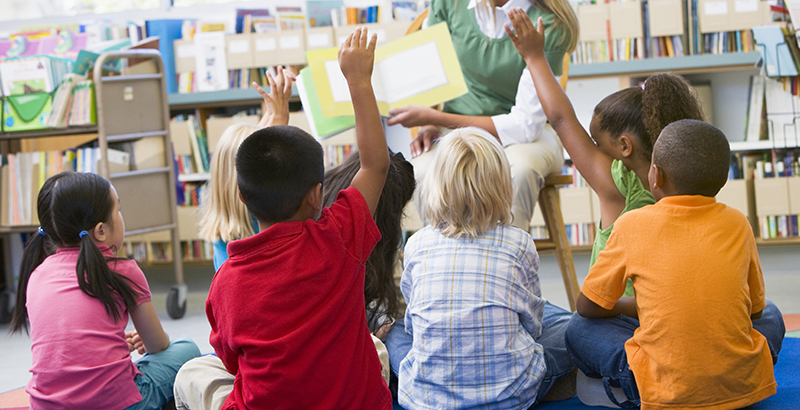 Young immigrants to this country — legal and illegal — often have one common experience: attending an American public school. The right set of supports in and around that school can put a newcomer on a path to self-sufficiency, academic success, and options for the future. Of course, the reverse is true as well. It is easy to assume that kids are resilient, with malleable brains that adapt quickly to a new language, culture, and content if you just put them in a school with a bunch of other kids to learn English. But assimilation does not come via osmosis.

Immigrant students and their families tend to cluster geographically, often in low-income neighborhoods. They account for 30 percent of public school students living below the poverty line and have a wide variety of needs that put stresses on the resources of schools that are required by federal law to educate them.

Immigrant students come to America with an enormous range of backgrounds and education levels; the needs of those who received a formal education in their home country are vastly different from the needs of refugees fleeing a war-torn nation who may have had little or no education and are suffering from trauma.

Cultural differences around gender and religion also may affect student behavior in new environments. And the volatile politics of the Deferred Action for Childhood Arrivals (DACA) program put educators on the front lines of a national policy debate that directly impacts the young people they teach each day.

Clearly, it takes more than an English as a Second Language teacher for schools to successfully support students who have recently arrived in the United States. Although this work is complex and varies depending on the students and host communities, the schools and districts that are most successful in helping newcomers become self-sufficient, successful learners have a few things in common: strong school leaders, a commitment to knowing and understanding newcomer students and their families, effective use of data, and wraparound community supports.

Take Salt Lake City’s Granite School District, which enrolls over 70 percent of Utah’s immigrant students. The district serves about 66,000 kids, and most of its campuses are diverse. For example, Woodrow Wilson Elementary School students speak more than 30 languages. As the number of newcomers increased, the district refined and expanded the supports provided to help these children and their families succeed.

That focus began with a public commitment from Superintendent Martin Bates that all students attending Granite schools are “our kids,” regardless of status or background, and the district’s educational equity department houses specific supports for new students and their families.

As an example, the district realized that many newcomers needed a better understanding of how to “do school” in the United States. That led to the creation of the Tumaini Welcome and Transition Center, a two-week ongoing class to help new students learn skills such as how to use a restroom, how to open a locker, how to respond to a fire drill, and how to ride the bus, along with basic English. Students attend Tumaini before transitioning to their home school.

Granite also created several community centers that offer adult English classes, an academy focused on helping parents prepare their young children for kindergarten, introductions to parent/teacher conferences, and district information sessions with interpreters to reach families directly. Said Jadee Talbot, Granite’s associate director of community centers, “It is wrong to assume that these parents do not care about their child’s education in the way that we care. Can you imagine the difficulty of putting your child on a bus in a foreign country where you do not speak the language or understand the school?”

Granite’s instructional approach begins by valuing knowing each child. This starts with teachers seeking to understand if newcomers have consistently attended school in their home country or had little or an interrupted education.

The curriculum used across the district has strong English learner supports, including daily dedicated language instruction. School leaders use data to monitor student progress and deploy a multi-tiered system to match students with the correct interventions over time, engaging with parents along the way.

Granite doesn’t claim to have figured out how to serve all students from other nations, but the district has dedicated resources — people, money, and time — to better serve this population. It is worth looking closely at its work both for ideas and to better understand the trade-offs the district has made to serve a rapidly changing and often high-needs student population.

We can also learn from St. Paul, Minnesota, where Hmong families began resettling over 40 years ago at the end of the Laotian civil war. Catholic Charities and Lutheran Social Services played key roles in helping families establish new lives, and St. Paul Public Schools had to quickly adapt.

Similarly, we should look to Lewiston, Maine, where more than 7,500 mostly African Muslim refugees have settled over the past 17 years. A once-fading blue-collar mill town has been profoundly changed, at times painfully, but district enrollment is increasing and immigrant students are successfully graduating from high school.

We can also learn from Pharr–San Juan–Alamo School District, near the Texas-Mexico border, where a focus on literacy in both English and Spanish has helped to increase student success across all subjects.

There is no single right answer about how to best support newcomer students, but it is clear that schools must provide more than English language skills to help them achieve academic success and self-sufficiency in their new country. Strong school leaders who value understanding immigrant students, who use data to measure progress, and who engage the community broadly are essential.

This work is intensive, and tension over the allocation of finite resources inevitably erupts. It is naive to think that schools can — or should — do this on their own. But, as these districts show, this work can be done.

This essay originally appeared in The Catalyst: A Journal of Ideas From the Bush Institute.

Anne Wicks is director of the Education Reform Initiative at the George W. Bush Institute.