February was a month for sweet acts of kindness at America’s schools, and perhaps you can credit Valentine’s Day with inspiring the outpouring of platonic love. Already this month, we’ve profiled the Michigan businessman who paid off the lunch balances for an entire middle school, the Ohio high schoolers on a mission to foster suicide prevention awareness, and the effort to end social isolation in schools through a national No One Eats Alone Day. But those were just the tip of the iceberg; here are 12 more amazing stories from this month to make your heart happy:

Posted by The Frederick News-Post l fredericknewspost.com on Tuesday, February 16, 2016

February 15: Maryland eighth-graders hand out roses to nursing home residents for Valentine’s Day — Daniel Ivanov, Sam Karch and Emma Lopez of Gov. Thomas Johnson Middle School in Frederick performed the act of kindness as part of a school assignment in which students were asked to work with a community organization. The students raised $140 by asking for change from fellow students. Then, they set up a GoFundMe campaign, which raised an additional $400. The experience was so rewarding, the students are already planning an Easter-themed project for the nursing home. (Read more: The Frederick News Post)
February 11: Blind Virginia freshman becomes sports announcer at his high school — Brendan Friedrich has wasted no time making a name for himself in high school. The freshman is already announcing the starting lineups at Heritage High School in Leesburg and aspires to announce the football games as well. 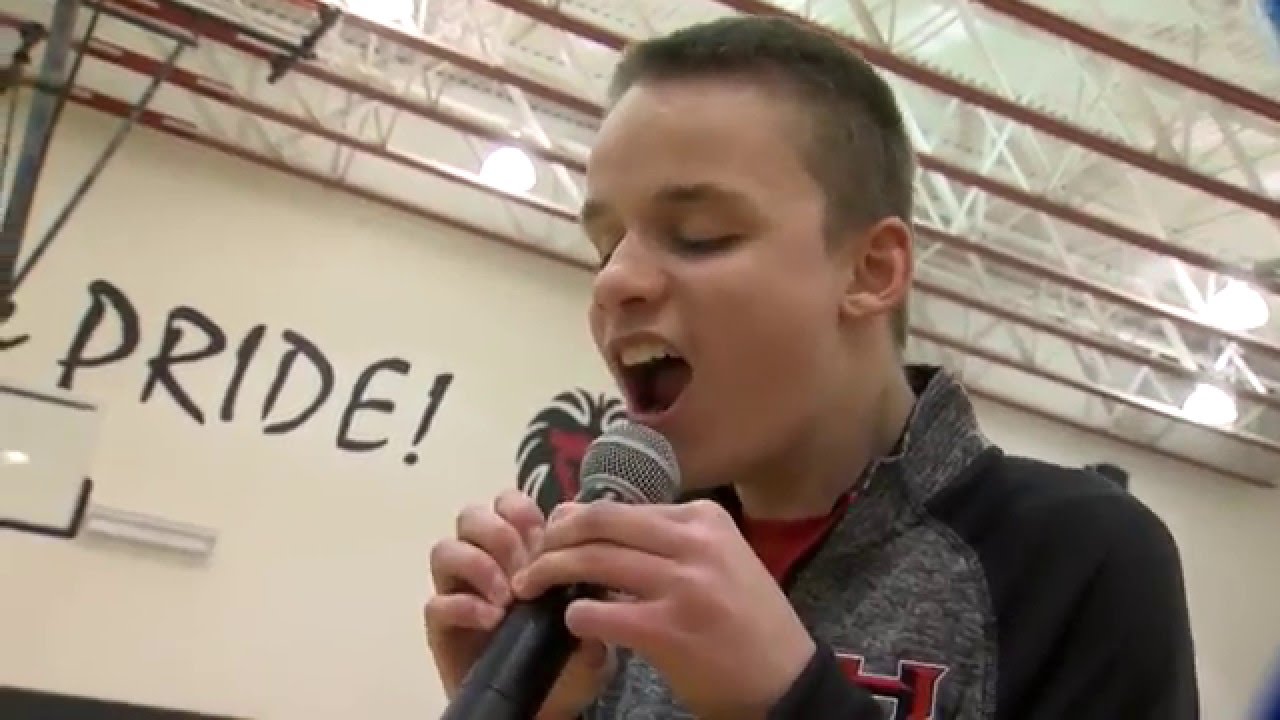 Friedrich is blind and relies on braille, practice and a spotless memory to hone his announcing skills. He’s so good that when a local news station learned that his first passion was weather, they invited him to give the weather report on a live broadcast:

Read more about Brendan at WJLA.com
February 16: North Carolina high school senior uses nursing class skills to save a stranger’s life — James Crossno was visiting a friend working at a grocery store when another worker collapsed. Crossno rushed over and immediately put into practice the training he learned from his CPR certification earned as part of his nursing fundamentals class. He felt for a pulse, and when he didn’t find one, began chest compressions. The man was expected to survive. (Read more: The News Herald)

February 7: New York music teacher performs with Lady Gaga at Super Bowl 50 — Alex Smith, resident of Peekskill and teacher at Yorktown Heights’ Soundview Preparatory School, practiced several hundred times before the big performance. Smith is a member of the Brian Newman Quintet, which previously performed with the pop star for "A Very Gaga Thanksgiving," and can be heard on the Lady Gaga/Tony Bennett duet album "Cheek to Cheek." (Read more: Lohud.com)

February 10: North Carolina music teacher wins Grammy Music Educator award — Phillip Riggs is a music teacher at the North Carolina School of Science and Mathematics, a public residential school for juniors and seniors. Riggs says the focus of his career has been about character and enhancing the quality of life for his students. (Read more: CBS) 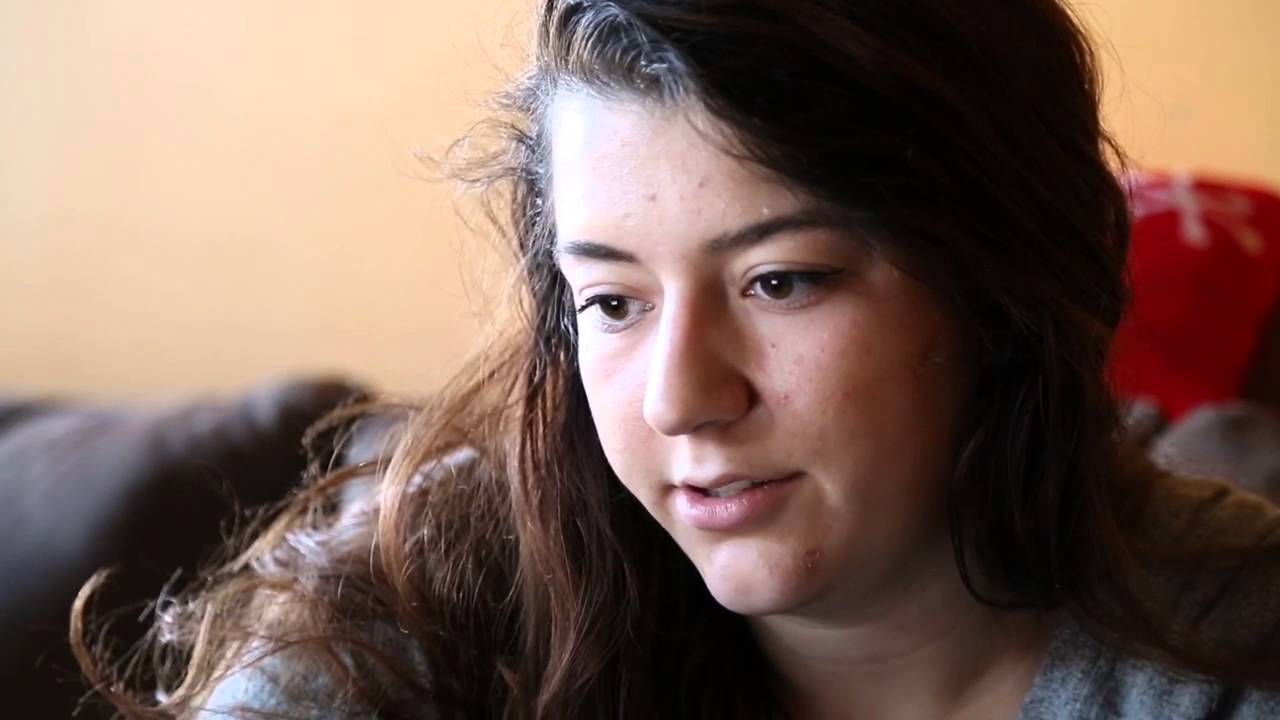 February 15: Kansas high schooler distributes shoes donated by Kim Kardashian West to local middle school — In December, 17-year-old Amelia Flores tweeted the celebrity with a request for a donation to her campaign for Soles4Souls, an international nonprofit that donates shoes to those affected by disaster or economic hardship. West promised to donate 1,000 shoes from Adidas and Kardashian Kollection. The donation was split among schools in Los Angeles, New Orleans and Flores’ Wichita. Flores gave 300 pairs of shoes to students at Jardine Middle School. (Read more: The Wichita Eagle)

Last year, the elementary school campus made the decision to implement “Comfort Corners” in every classroom, which are…

February 12: California elementary school creates ‘Comfort Corners’ for stressed-out students — Corners have a bad rap. They’re the place where naughty kids are sent. But Dennis Earl Elementary School in Turlock is flipping the purpose of a corner into a positive one. Their new “Comfort Corners” are filled with beanbags, books and other tools to help kids self-regulate when they’re feeling stressed. The concept was introduced to the school by a local grief support center. (Read more: Turlock Journal)

Applying for a job, renting or buying a home, creating a budget and living within your means are all part of being an…

January 27: Community volunteers teach South Dakota middle schoolers how to budget personal finances — Eighth graders at North Middle School in Rapid City were given a profession and monthly salary. In small groups, they worked together to learn if they could afford rent or if they would need to have a roommate. They also learned what it would take to afford cell phones, pets and entertainment. (Read more: KOTA)

February 1: Texas elementary teacher gives her students ‘Brain Breaks’ to refuel young minds —Laine Jones, principal of Folsom Elementary School in Prosper, says that she adapted “Brain Breaks” roughly 10 years ago. She says the kids need to stand up after sitting for so long. Her teachers are making the breaks fun, from cup-stacking competitions to dancing along to “What does the fox say?” (Read more: NBC 5)
February 9: Ohio programs allow adult dropouts to earn high school diplomas — The state offers two programs for those wishing to earn a diploma instead of going the GED route. 22 Plus is an online program where students obtain high school transcripts and then complete missing credits and standardized tests. The other program is offered through five pilot schools and included career training for high-demand jobs such as nursing or IT. (Read more: The Columbus Dispatch)

February 17: 5-year-old Louisiana girl uses fire safety skills learned in school to save her blind grandmother from burning house — When Cloe Woods’ Pre-K class at Our Lady of Perpetual Help in Kenner went to the local fire department for a fire safety lesson in October, she had no idea she would soon be using her skills to save a family member. But that’s exactly what happened one fateful day last week when the stove in her house caught fire. When the fire alarm sounded, Cloe ran to her grandmother’s room and guided her out of the house. (Read more: KTBS)

February 2: Indiana elementary school students get a visit from live penguins — Randy and Simon, 9-year-old female African penguins, took turns entertaining the students at Clarks Creek Elementary School in Plainfield. The tuxedoed birds are from Newport Aquarium, and they visited the school as part of Clarks Creek’s One School, One Book event. The selected book is Mr. Popper’s Penguins and families are encouraged to read a chapter a week with their kids. (Read more: The Flyer Group) 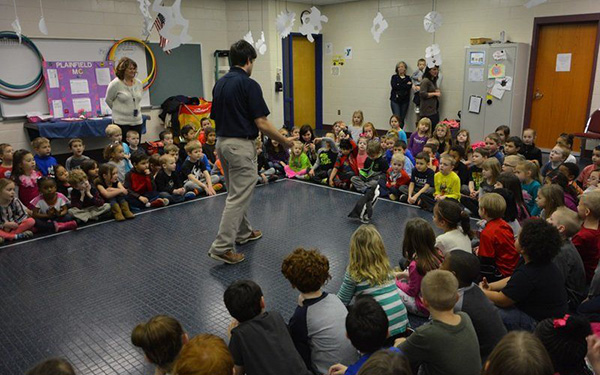 Photo courtesy The Flyer Group
Have you recently seen something inspiring or extraordinary at your school? Share the good news with us at info@the74million and we will do our best to get it on the site!
Submit a Letter to the Editor
February 24, 2016