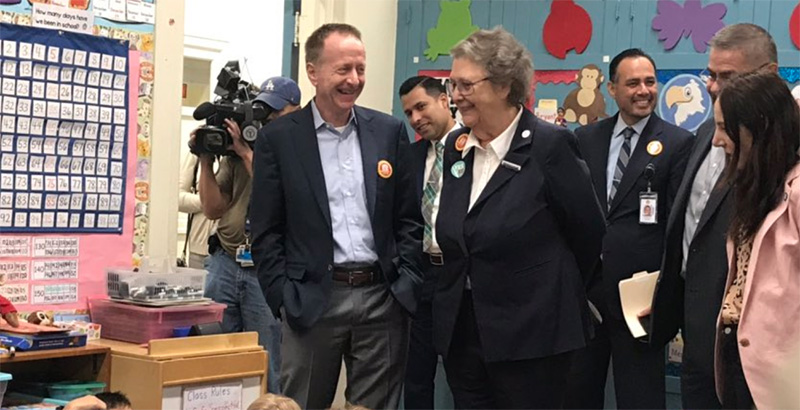 L.A. Unified’s next election — about two weeks away, on June 4 — will ask residents within district boundaries to support Measure EE, a tax of 16 cents per square foot of developed property to raise about $500 million annually for the district. L.A. Unified is projecting insolvency in three years and is at risk of a county takeover if it can’t stay out of the red. If Measure EE passes with at least a two-thirds majority vote, it would start generating revenue later this year.

Goldberg, whose campaign mantra underscored investing in public education, quickly rallied her supporters Tuesday night to get out the vote to pass Measure EE. “We need a movement to make the changes we need,” Goldberg, who was backed by United Teachers Los Angeles, said Tuesday night in a video posted by Kyle Stokes of KPCC and LAist. “And that’s why, as soon as this campaign ends, we’re starting tomorrow on EE.”

Board President Mónica García had told LA School Report on May 13 that the first priority for the new board member would be helping to get the measure passed. “There’s an opportunity to help us get her supporters out for Measure EE. There is an opportunity for that person to support more dollars going to school sites,” García said. “So that person gets to choose: Do we want to strengthen bureaucracy, or do we want to continue on the path of empowering leaders in the field?”

Congratulations @Jackie4LAUSD on your victory last night. I look forward to working with you to give all our kids a quality education. Let's start with passing Measure EE! @VoteYesOnEE

The parcel tax has been a unique point of common ground for UTLA and the district, which have long clashed over whether L.A. Unified is in financial crisis. Measure EE is the current epicenter of a movement to boost L.A. schools’ funding after years of systemic underfunding at the state level. Calls for more money intensified leading up to January’s teacher strike and continued throughout the school board race. L.A. Mayor Eric Garcetti, who was instrumental in ending the strike, has also been campaigning for the parcel tax.

The six current board members unanimously approved Measure EE in late February. The tax is progressive, meaning businesses and corporations would shoulder the brunt of the tax burden. Most homeowners would pay between $100 and $450 per year; Measure EE would not interfere with existing or new rent stabilization ordinances. There would also be exemptions for senior citizens and those relying on disability payments.

The tax would be in effect for 12 years.

Passing Measure EE is not a slam dunk, however. A less costly parcel tax already failed to pass in 2010, and the school board removed another from the ballot in 2012. A February poll on the heels of January’s teacher strike showed roughly 70 percent approval for a per-square-foot parcel tax, just above the two-thirds vote required to pass.

Measure EE has also faced staunch opposition, notably from business and taxpayer organizations who say reform has to come first and who don’t believe the ballot language will ensure revenue is spent in the classrooms.

But he added that he reminds residents who are voting next month “to be honest with themselves about where they stood during the strike.”

“There are a lot of people who were yelling … to do whatever the teachers wanted and not wanting to listen to the other side, which was that we didn’t have the money, who now are saying, ‘Well, I don’t support the tax.’” he said. “To say, ‘Give the teachers all that they want’ and then say, ‘Oh, but we’re not going to support you in the parcel tax’ is kind of contradictory.”

The latest contest to Measure EE is a lawsuit filed May 7 from the Howard Jarvis Taxpayers Association to block the tax. The suit says Superintendent Austin Beutner ordered a significant change to Measure EE’s ballot language — from encompassing all “habitable main square footage” to “all buildings or structures erected on or affixed to the land” — after the board had already voted on it. That change could subject a broader range of properties to the tax, going “beyond the scope of what the board voted for,” Pasadena-based attorney Kevin Moore told LAist.

A board resolution passed that same day confirmed that the tax would exclude parking lots and garages. A judge nonetheless allowed the lawsuit to move forward, with a hearing date set for June 6 — two days after the vote. The hearing would reportedly determine if June 4’s election results should be certified.

#Update: Hearing from @NoOnMeasureEE campaign that a judge is allowing @HJTA’s lawsuit to move forward. Hearing date set for June 6 — 2 days after parcel tax vote — to determine if #lausd election results should be certified. pic.twitter.com/oo4M29zVif

Measure EE supporters like García don’t appear fazed. “Measure EE, board races, the work that L.A. Unified does is very, very important,” García said. “The Olympics are coming in 2028; those are our third-graders. The class of ’32 is coming as of July 1; they’re in our kindergarten. I think I would just encourage all parts of civic life to recognize the impact that L.A. Unified has on our families and our community.

“When we get it right, we change the world,” she added. “And so I know the best is yet to come.”

The voter registration deadline for this election is May 20. For more information, click here.