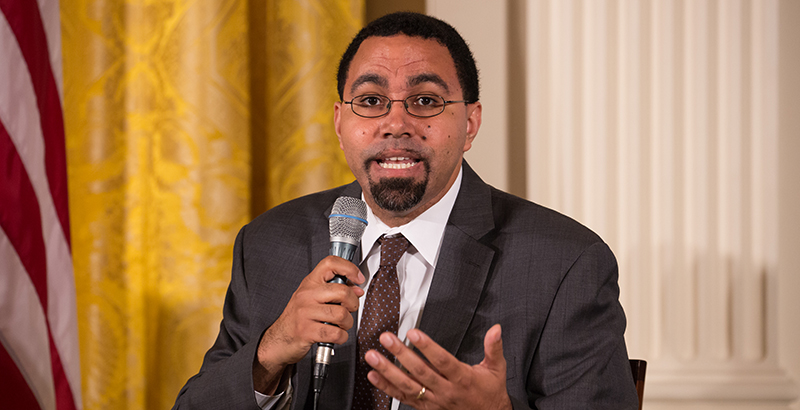 John King may be the first U.S. secretary of education who was kicked out of high school. But he hopes he’s not the last.

King’s parents died before he finished sixth grade. By the time he was in high school, he was a hurting, angry kid who needed a lot of patience. He found it, he says, from teachers.

“Part of my story is about second chances and the willingness of adults to have more hope for me than I had for myself and to see me as more than the sum of my mistakes,” King said in a recent interview with Jeremy Smith, president of the Rainwater Charitable Foundation, at a Fort Worth, Texas, summit co-hosted by the foundation and education reform nonprofit Empower Schools.

During the conversation, King, whose parents were African American and Puerto Rican, called for more of what kids need — teachers of color, engaged classrooms, school leaders free to make decisions — and for less of what stands in the way, including self-congratulations, hypocritical budgeting and “fauxtonomy.”

At the heart of a quality education, the former secretary said, are kids who love being in school. They are interested in what is being taught, challenged to increase their knowledge and supported as they mature intellectually, socially and emotionally.

Unfortunately, this does not describe the experience of every student, every day, in every single classroom in America — which is why education reform is needed.

“We give the least to the students who need the most,” King said.

In some ways, King was preaching to the proverbial choir. But being on board with exciting new ideas, he cautioned, is not enough: “We can’t just be boosters for reform or innovation.”

A true commitment to results means embracing accountability and being “tough on bad actors,” he said, citing underperforming charters in Michigan. Reformers, he added, are too quick to self-congratulate at the first sign of progress: “If we set the bar for other people’s children as high as we set it for our own, we wouldn’t be satisfied with a little bit of progress.”

One important way to do this is diversifying the country’s teaching corps. In addition to raising expectations for children of color, having teachers of color strengthens the “civic health” of all children.

“It’s a little bit harder to be racist if you learned calculus from a black teacher,” King said.

Other education-reform bright spots King called out were Chicago Public Schools’ data-sharing partnership with the University of Chicago, which has led to higher graduation rates; New Orleans’s decline in corruption, though he acknowledged “there’s still work to do”; San Antonio’s increase in socioeconomic integration; and Dallas’s resource-intensive turnaround model, ACE.

When Smith asked about the significant price tag attached to ACE, King was unequivocal. “It is less expensive to do things like ACE than it is to not do them,” he said, because the supports available through the model are likely to keep more kids out of the criminal justice system — a far more expensive pathway.

Money needs to be spent, King said, but it needs to produce real results by being matched with reforms in the budgeting process at the district and school levels. Often, “what they are doing with their budget isn’t consistent with their stated values,” he said, as when a first-year teacher is given a crowded remedial math course while a highly paid, experienced teacher gets a 12-student honors class. This means less money is being spent per child in that remedial class than in the more advanced group.

One way reformers have sought to increase budget equity is to hand control to school leaders who have committed themselves to creating real opportunity for every student.

The portfolio, or third-way, model of school governance involves groups of charter schools and autonomous district schools that are authorized by an elected school board but not operated by a central district administration. Districts give operational autonomy to principals who assume control of staffing, curriculum, budget and school schedule to a greater degree than under the traditional district model.

Empower Schools has assisted public school districts in creating 10 nonprofit empowerment zones in five states: Texas, Colorado, Indiana, Massachusetts and Missouri. Fort Worth, King noted, will soon see the benefits of more autonomous campuses under a new Leadership Network run by the district and Texas Wesleyan University and guided by Empower Schools. A recent Texas state law has paved the way for schools to form partnerships with institutions of higher education, community and education nonprofits, and charter schools.

King voiced great confidence in the portfolio model, but only if the autonomy is real. “Fauxtonomy,” he said, takes the look and feel of innovation, like name changes and themed campuses, but stops short of letting campus leadership make the decisions that really matter — for instance, determining the school calendar and staffing.

While it may be politically difficult to require additional teacher training or make placement decisions based on teacher effectiveness rather than seniority, he said, “Where there is that courage, I think you can do good things.”