Jeb Bush: What the Media Is Getting Wrong About Florida’s Push to Help Students With Disabilities 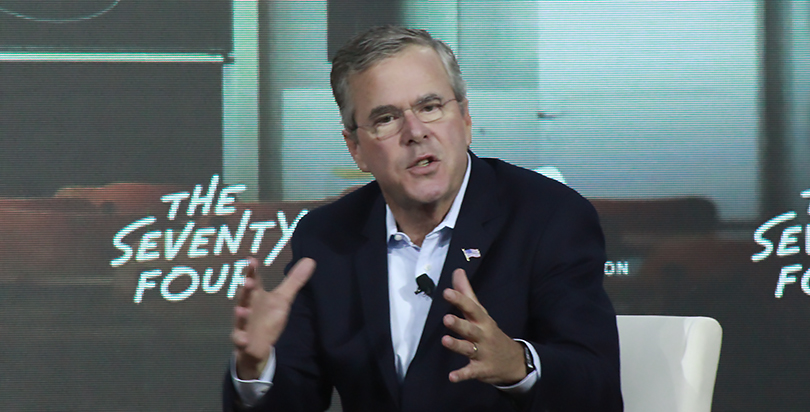 In an act targeted at parochial schools, the state of Oregon in 1922 passed legislation requiring all students to attend public schools.
Three years later, in Pierce v. Society of Sisters, the U.S. Supreme Court struck down the law, stating in its ruling: “The child is not the mere creature of the state; those who nurture him and direct his destiny have the right and the high duty, to recognize and prepare him for additional obligations.’’
But while today parents have the legal right to oversee their children’s education, it is a hollow right for the many who remain stuck in their assigned public school because they lack resources to choose another option that, in many cases, may be a better alternative.
For all practical purposes, their children are “mere creatures of the state.’’ However, they become victims of the state when their schools do not meet their educational needs.
During my time as governor, we sought to address this inequity in Florida by empowering the parents of our most vulnerable children with options, including two programs that give them access to a range of private school alternatives. We established the Florida Tax Credit Scholarship Program for low-income families and the McKay Scholarship Program for families of students with disabilities.
These programs have become the largest of their kind in the country, and they are chief targets for teachers unions wanting to stem the wave of momentum for school choice in America right now.
In that light, it was hardly surprising to see a recent New York Times story criticizing Florida’s McKay Scholarship program. The premise of the story was that McKay parents unknowingly give up federal protections for their children guaranteed under the Individuals with Disabilities Education Act (IDEA).
WATCH: Jeb Bush Talks America’s Schools at the 2015 Education Summit
This concern never rose to my desk when I was governor. And if it has become one, it should be resolved in a way that provides parents with a full understanding of the scholarship program before entering it and of every single right their child has. But the notion that more than 31,000 parents are somehow being misled into making wrong decisions for their children simply is not credible.
The McKay program exists for a reason. Too many parents hit frustrating dead ends in trying to get the right services for their children in their assigned public schools. Even worse, it is well documented that students with disabilities are far more likely to be abused, bullied, isolated, and subjected to harsh punishment.
As David M. Perry, an associate professor of history at Illinois’s Dominican University, wrote for CNN in 2016: “Despite decades of improvement in our special education practices, and the hard work of tens of thousands of fantastic teachers, the data is clear. Children with disabilities — especially those who are black or brown — remain terribly at risk for violence in schools.”
Data and anecdote after anecdote shared by frustrated parents prove that IDEA regulations are no magic cure-all for students with disabilities.
Florida’s McKay Scholarship Program simply gives parents options if their children are stuck in the wrong learning or social environment for their unique needs. It is not a condemnation of public schools or a seal of approval for private schools. In fact, the McKay program includes public school choice as well.
We purposely did not wrap public school regulations around private schools. Instead, with some restrictions, they are free to create their own learning models, with parents being the judges of whether they will work for the unique needs of their child.
A survey of McKay parents taken in the early years of the program showed overwhelming satisfaction with their chosen schools. The reasons were predictable. Their children were in much smaller classes with fewer behavior problems. There were drastic reductions in bullying and physical assaults.
And as far as the IDEA is concerned, only 30 percent of parents said their children received all services required under federal law from their public schools, while an overwhelming 86 percent reported their McKay schools provided all the services that were promised.
I will never believe that empowering families with their acknowledged right to oversee their children’s education is bad for families. Nor can I believe that in all the Times’s reporting, not one parent could be found whose child is flourishing in a McKay school.
And so I’ll close with the comment of one, which is prominently displayed on the McKay program’s website: “The school-choice issue is not about public versus private; it’s about choice. It’s about knowing what works well for my family and being able to make that choice for them.”
(The 74 Interview: Jeb Bush: Yes on Choice and Standards, No on Trump and Clinton)
Submit a Letter to the Editor
May 14, 2017