Inside the L.A. Nonprofit Whose ‘Cradle to Career’ Programs Helped the City’s Neediest Students Before Its Abrupt Closure 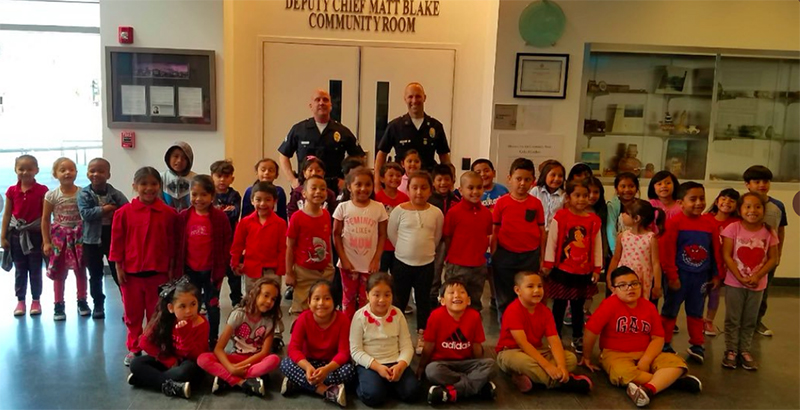 Students from Leo Politi Elementary School during a May field trip to the Los Angeles Police Department’s Olympic station. (Twitter/LAPD_Kowalski)

The 74 and LA School Report were preparing to publish a story on the Youth Policy Institute’s work serving some of Los Angeles’s neediest students and families when the news broke Oct. 25 that the long-standing anti-poverty program was closing its doors. This followed the mid-October release of what the Los Angeles Times described as “a devastating audit that found lax oversight, inaccurate financial reports and a grim budget outlook.” The swift demise of the high-profile nonprofit stunned many and left officials and advocates scrambling to find other entities that could pick up YPI’s work, including afterschool programs at some 90 L.A. schools. While the mismanagement of YPI is being lamented — executive director Dixon Slingerland was terminated last month — the value of the services it provided has been widely recognized. As efforts are underway to keep those supports going, we’ve decided to publish the experiences of some children and families who, like thousands of others in greater L.A., will be adversely impacted by their loss.

Like many 6-year-olds when they’re stressed, Scarlet Mejicanos sometimes throws temper tantrums. Her parents are separated, so she splits her time after school between her mom and dad, which can make things difficult. But recently, her mother, Hayme Valenzuela, says she’s noticed a change in her daughter, who isn’t acting up as much as she used to and seems more excited about learning — both at home and in school.

“Her attitude has been a little more relaxed,” Valenzuela said. “I see a difference.”

Both mother and daughter were involved in workshops and programs run by the Youth Policy Institute at Leo Politi Elementary School, located in the heart of Los Angeles, where Scarlet attends second grade. The institute was a nonprofit organization that worked in about 130 schools across L.A. As Scarlet attended classes, Valenzuela would often be in workshops designed for parents that focus on the social and emotional well-being of their children and novel ways they can provide their kids with at-home learning opportunities, from take-home science projects to strategies to engage them in math and reading outside the classroom.

“I understand her a little more,” Valenzuela said. “And they’ve helped me be a bit more understanding of myself.”

YPI provided what it called “cradle to career” services in an attempt to reduce long-standing poverty in some of L.A.’s most challenged neighborhoods. Much of YPI’s efforts revolved around in-class tutoring and afterschool workshops for students and parents that went beyond homework help and student well-being to cover life skills, such as balancing a budget.The 130 schools where YPI had a presence encompassed public, charter and pilot schools, which are public schools within L.A.’s school district that have more autonomy over budget, staffing and curriculum. A handful are schools that YPI operated itself.

“When we think of the work we’re doing, we think of it holistically,” said Iris Zuñiga, YPI’s executive director, who oversaw the organization’s school partnerships.

YPI’s programs have been so effective that one of them is being used as a model for schools across L.A. Joel Cisneros, director of school mental health for Los Angeles Unified School District, says a new mandatory “trauma resilience” program, which emerged from elements of YPI’s workshops, is being expanded to all of the district’s more than 1,000 schools. The program helps educators identify “toxic stress” among students, such as ongoing exposure to community violence, homelessness, abuse in the home, hunger and poverty.

“We need to be responsive to the needs of the community,” Cisneros said. “And YPI has been a good partner in this with a similar philosophy.”

YPI served about 112,000 students and adults throughout L.A. each year. The overwhelming majority of the schools where it operated — about 120 of them — were in the LA Promise Zone, a cluster of high-need neighborhoods where about 35 percent of residents live in poverty, compared with 20 percent citywide.

YPI was founded in L.A. in 1983 and grew out of the Robert F. Kennedy Memorial Fund, which was created to aid low-income families. The organization had a $42 million annual budget primarily funded through local, state and federal money. It received funding from the U.S. Department of Education to operate in eight public and charter high schools located in Promise Neighborhoods, federally designated areas with high levels of poverty that qualify for additional services and supports.

Similar nonprofits and programs operate around the country, including in Boston, in Seattle and throughout Colorado, many of which have shown progress around boosting test scores, graduation rates and parental involvement in schools. A 2018 study found that K-5 students participating in comprehensive services offered through Boston-based City Connects had a 9.2 percent high school dropout rate, compared with 16.6 percent for nonparticipants.

Even as these programs have shown success in different parts of the country, they’re still often overlooked in many districts. An April 2019 study by the Education Redesign Lab at the Harvard Graduate School of Education, which noted YPI’s work, stated that while “personalized plans represent a promising approach, they are largely underemployed in the field of education.”

In L.A., YPI operated in three areas — the San Fernando Valley, Pico-Union and East Hollywood — and ran more than 90 afterschool sites that offered homework help, recreational options and classes on subjects such as photography, arts and robotics.

Inside the schools themselves, YPI averaged anywhere from five to a dozen staffers, all led by a school coordinator. Jacob Rebatet, the YPI coordinator at Leo Politi Elementary, oversaw seven tutors and a counselor, who met one-on-one with about 40 students who often needed emotional support. To determine which students required the most attention, YPI used a set of criteria involving attendance, grades, standardized test results and social or emotional issues that arose.

Most of YPI’s work was done during school hours. Tutors, for example, worked alongside teachers in the third, fourth and fifth grades for about four hours a day to help specific students in the classroom who might be struggling. The counselor, called a student and family success coach, determined how students were doing socially and emotionally by meeting with them away from class in smaller settings to ask about what was going on at home. The counselor monitored students’ attendance and classroom performance and even initiated conversations with parents about home life.

Principal Luis Ochoa credited YPI’s work in reducing the number of behavioral incidents he’s seen among students, especially on the playground, and improving their behavior away from the classroom.

“The stories we get from parents through the classes they’re attending is that they feel better at home and have better relationships with their kids,” Ochoa says. “They know what to ask [their kids] when they come home.”

Leo Politi Elementary has about 750 students, 96 percent of whom are Latino and 100 percent of whom qualify for free or reduced-price lunch. Ochoa says a number of parents are considered homeless. Some live with one or two other families in the same home; others have problems with substance abuse; many kids come from split families; and some of the parents are undocumented.

“A lot of our kids are coming to us in the last few years with a lot of trauma at home with parents,” Ochoa says.

To aid those families most in need, YPI helped distribute more than $91,000 in grocery vouchers to families in 2018 and helped them complete tax returns and set up savings accounts.

“It’s making a difference in the community,” Rebatet, the Leo Politi coordinator, said. “There’s a ripple effect. If you can share some of these things with your own family, and if they can share them with their neighbor, the idea is that the community as a whole can start to benefit.”

One of YPI’s newer initiatives at Leo Politi was a three-week summer program created as a bridge for students about to enter kindergarten. The workshops focused on helping kids understand what their first day at school would be like and included basic math and English instruction. They also included a series of classes for parents to help them find teaching and learning moments with their kids at home. The idea, Rebatet said, was to ease the transition for kids entering kindergarten, noting that he saw progress among the students fairly quickly.

“We had some kids who at first cried the whole day but then, after a while, only cried at the beginning,” Rebatet says. “Some of these tiny accomplishments are crucially important.”

Valenzuela, Scarlet’s mother, said her daughter stayed interested in learning over the summer leading up to second grade, especially reading and math, thanks to YPI’s programs. One recent project included a science experiment about energy that involved Valenzuela and her daughter turning on little lights with a battery by following some simple instructions. Valenzuela said Scarlet couldn’t wait to return to Leo Politi this year.

“She was excited to go back to school,” she says. “More excited than me.”