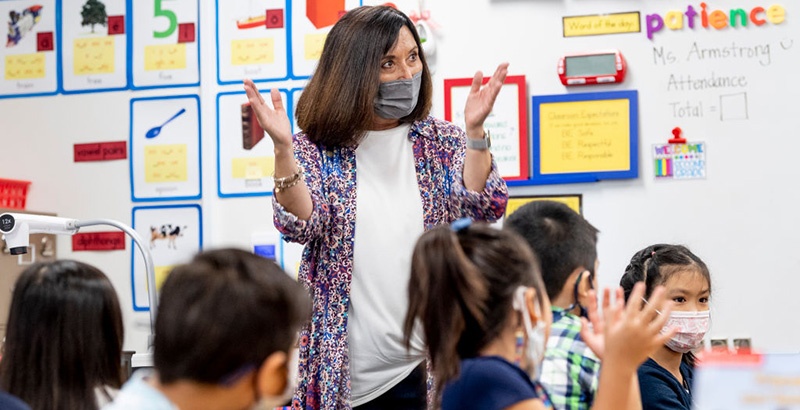 Following a two-year pause, states must resume the process of pinpointing their lowest-performing schools and those with persistent achievement gaps, according to a recent draft of guidance from the U.S. Department of Education.

But bowing to uncertainty sparked by the pandemic, officials will allow one-year changes to the criteria states use to identify those schools. That means the report cards states use to communicate student performance to the public could look quite different.

To help measure COVID-19’s impact, states might also choose to rate schools on how much instructional time students lost or break out chronic absenteeism by whether students were attending school in person or remotely. The department will collect comments on the 31-page document until Jan. 17.

“This gives a clear signal to the field and to the states that we are restarting accountability,” said Jennifer Bell-Ellwanger, president and CEO of the Data Quality Campaign. “This data needs to be reported to families and the community.”

The nonprofit is among the organizations that have been calling for more statewide data on student performance during the pandemic — even though standardized tests were canceled in 2019-20 and several states saw low turnout for testing last school year. Others say the department, by allowing such a vast array of changes, could leave parents and the public more in the dark about how well schools have performed.

The department is recommending that states and districts update improvement plans to focus on the pandemic’s effects on the most vulnerable students. States can also give those schools more time to improve by not counting the 2019-20 and 2020-21 school years, and can change the achievement targets they need to hit to be removed from the state’s lowest-performing list.

“Uncle Sam is saying that not only is it okay to move the goalposts, states can install new goalposts if they want to, too,” said Dale Chu, a senior visiting fellow with the conservative Thomas B. Fordham Institute who helped implement Indiana’s accountability system.

In addition to the temporary changes, the document encourages states to consider long-term additions, such as adding new indicators of student success that could endure beyond 2022.

Under the federal Every Student Succeeds Act, states must test students in reading, math and science and publicly identify their lowest-performing Title I schools and those where groups of students, such as English learners or students with disabilities, consistently underperform. Those schools, which receive extra funds to help students make progress, have up to four years to show improvement or face additional state intervention.

Maria Cammack, deputy superintendent of assessment, accountability, data systems and research at the Oklahoma State Department of Education, said state officials aren’t talking about adding new measures of school quality for one year, but want to be as transparent as possible about data elements that can supplement its high-stakes accountability system.

“Everybody wants to understand unfinished learning,” she said, adding that it can take a while for districts to report and interpret new information. “Any changes enacted for a single year breaks our ability to monitor change in performance in a time where we need to understand it most deeply.”

Bibb Hubbard, president of the nonprofit Learning Heroes, said she appreciated the department’s expectation that states include families in making decisions about changes to accountability. Parents, she said, rely on state report cards to understand their children’s progress in school and “want the truth, even if it isn’t good news.” States, she added, should research which measures parents find most meaningful.

Chu added that it could be hard for the public to keep up with “all of the behind-the-scenes tinkering.”

“If states add, modify [or] remove a bunch of indicators from their state report cards,” he said, “it will be extremely difficult, if not impossible, to get an honest accounting of how schools and students have fared.”

A key question for state leaders has been how to calculate whether schools have improved over the past few years in the absence of consecutive years of assessment data. Most states consider test score trends over multiple years as part of their accountability systems.

The guidance suggests states could replace the growth measure with a different indicator — like achievement gaps — but experts say such a change could significantly alter which schools are identified for improvement.

Growth is currently “by far the best” measure for differentiating between schools, said Cory Koedel, an economics and public policy professor at the University of Missouri–Columbia and an expert on growth measures. “I can’t even name what a plausible back-up plan would be,” he said.

Chris Janzer, the assistant director of accountability at the Michigan Department of Education, added that there’s no guarantee state testing will run smoothly this year.

“We don’t know what test participation is going to look like this coming spring, especially with Omicron raging now,” he said. “Will we have another wave in the spring that causes more school disruptions?”

For 2021 testing, the department waived the requirement that states assess 95 percent of their students. But if schools fall short of that percentage in 2022, it’s possible they would be identified as low-performing based on participation rates alone, said Janzer, whose state saw 70 percent participation last year.

Oklahoma had an overall participation rate of over 90 percent last spring, Cammack said, but in some districts, only about 30 percent of students took state tests, despite an assessment window that was three weeks longer than normal and included extended hours and Saturday sessions.

Stanford University scholar Linda Darling-Hammond, who serves as president of the California State Board of Education, acknowledged that 2022 probably won’t be a “neat and tidy year” in the realm of testing and accountability.

But she is among those who see the guidance as a way to “lay a path toward reauthorization” of ESSA. The department, she said, is sending the message that accountability is important, but that states should also “meet the moment” and consider changes that allow more room for other measures of student achievement and school performance.

Bell-Ellwanger, with the Data Quality Campaign, said the guidance presents an opportunity to add criteria that some say is lacking from many state report cards — such as more data on what students do after high school.

In December, her organization and Chiefs for Change, a network of district leaders, issued a report arguing that K-12 leaders could better prepare students for college and the workplace if data on college enrollment, jobs and other postsecondary trends were more accessible.

“As states signal that they are moving forward with recovery,” she said, “understanding college and career pathways and the economic mobility of students is important.”

The department’s guidance notes that states could also consider adding “opportunity to learn” standards — such as the extent to which students have access to qualified educators and a high-quality curriculum. A recent report from FutureEd, a think tank at Georgetown University, highlighted growing efforts to rate schools on questions of equity, which could range from whether students have access to advanced courses or even if schools have Black and Hispanic mental health providers on staff.

But the report noted that some measures might not be statistically valid and reliable enough for an accountability system that determines consequences for schools.

“They need to be predictive,” said Thomas Toch, the director of FutureEd and co-author of the report. “They need to confidently signal how students are likely to perform in school and beyond.”

But he added that just reporting data on some of those goals is still useful for the public even if they aren’t used to identify schools for accountability. The department’s guidance takes this “cautious stance,” he said. “Transparency has the power to focus educators’ and others’ efforts, even when they don’t face direct consequences for the information that’s collected.”