In Puerto Rico, the Hurricane Tore Their Lives Apart. In Florida, The Storm Brought Them Together 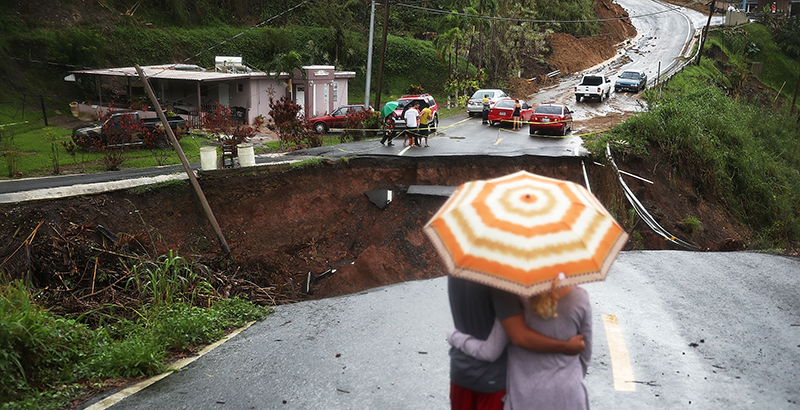 People look on at a section of a road that collapsed and continues to erode after Hurricane Maria swept through the island. (Photo by Joe Raedle/Getty Images)

On the first day in her Orlando classroom, Karen Espino found a group of children to whom she could relate. Before arriving in Florida about a month ago, she had spent weeks in her ground-level apartment in San Juan without power or running water, and with a crippling uncertainty about the future.

The bills were already starting to pile up when the single mother jumped at the chance to leave Puerto Rico, seeking stability for herself and her two teenage children — like thousands of families since Hurricane Maria devastated the island Sept. 20. With a decade of teaching experience under her belt, Espino scored a job with Orange County Public Schools just four days after landing at the Orlando airport.

In her new classroom at Lake Nona Middle School, where she teaches English as a Second Language, she has met about a dozen students who were displaced by the storm. Just like her, they had left their homes behind, found their way to an unfamiliar school in Orlando, and begun new lives.

Espino believes that beyond helping the students become comfortable with English, she can help them adjust to their new, unfamiliar surroundings because of their shared experience fleeing disaster.

Since Hurricane Maria ripped through Puerto Rico as a Category 4 storm, thousands of students have fled to schools on the U.S. mainland. More than 6,400 children have already made the transition, according to figures released last week by the Puerto Rico Department of Education. A majority of them have enrolled at public schools in Florida. So far, Orange County Public Schools in Orlando has taken in more than 2,400 students displaced by hurricanes in Puerto Rico, the U.S. Virgin Islands, Texas, and other districts in Florida.

With that influx came demand for additional teachers, so as Puerto Ricans landed coveted plane tickets off the island after the storm, administrators launched a recruitment campaign. The district even set up shop at Orlando International Airport, where human resources officials interviewed Puerto Rican educators right there on the spot.

Jose Martinez, principal at Orlando’s 3,500-student Colonial High School, said he’s in the process of hiring three teachers displaced by Maria. Colonial, where a majority of both students and teachers are Puerto Rican, has become a hub for new arrivals displaced by the storm, and 150 students have enrolled so far. To adequately serve them, he said, “I need to hire additional teachers just to kind of make that master schedule flow.”

Two of the teachers in Colonial’s application process are slated to teach English as a Second Language, and the third would teach mathematics, Martinez said. If the number of new students continues to climb, he said, he’ll need even more teachers. Like Espino, Martinez sees that shared experience between teachers and students — surviving a hurricane and relocating to a new community — as an asset. But the entire school rallied around those displaced by the storm. “As a school, we have come together and said, ‘This is the island of Puerto Rico, a majority of us are from Puerto Rico, we’re going to do this together,’ ” he said.

A change of plans

Espino said she initially intended to return to Puerto Rico, and when a friend volunteered to pay her family’s way off the island, she got round-trip plane tickets.

She wanted to return to her job at St. Mary’s School in San Juan, which officials planned to open on a half-day basis around the time she left. But with teacher pay being very low in Puerto Rico, Espino also worked at the after-school program, which was not scheduled to resume.

“That’s an income that’s uncertain, and that’s an income that I depended on,” Espino said, noting that she came to Florida prepared, bringing along her teaching license and university transcripts. “The thing is, when we got here, one thing led to another and everything happened really quickly.”

Espino and her children were welcomed in Orlando by family members, who put her in touch with the local school district. Within days, she found herself in an interview with Lake Nona officials, who offered her a job on the spot. “I did have to make that choice in the matter of a few minutes, I did have to process it,” she said. “My whole world was just spinning, but, as a parent, I do try to think of what’s best for my children.”

Espino’s first day at Lake Nona was Oct. 30, and after a few orientation days, she met her new students. Some are from Puerto Rico, but her class of English language learners has children from several countries, including Brazil and Venezuela.

So far, Orange County Public Schools has hired 57 Puerto Ricans who fled the island after Maria: 34 teachers and 23 staff members, among them bus drivers and custodians.

For their part, Florida education officials have worked to ease the transition for Puerto Rican students and teachers. The state waived the application fee for a Florida teaching certificate for educators displaced by the hurricane, and students were allowed to enroll in schools without required paperwork. Still, there are roadblocks. Some Puerto Rican educators have learned they need to take additional tests before they can lead a classroom, The Pew Charitable Trusts reports. The Florida Department of Education does not plan to adjust teacher certification requirements or waive exam fees.

Meanwhile, some education leaders in Puerto Rico — including Aida Díaz, president of the Asociación de Maestros de Puerto Rico, an American Federation of Teachers affiliate — are concerned about the number of teachers fleeing the island for mainland schools. Although post-hurricane living conditions in Puerto Rico are brutal, she acknowledged she’d prefer that teachers stay on the island to help rebuild the public schools there. “But I can’t ask a teacher who has his or her mother sick or her husband or her kids and doesn’t find facilities to take care of them,” she said. “I can’t say to that teacher, ‘Don’t go away.’ ”

Julia Keleher, Puerto Rico’s education secretary, said she’s not worried about teachers leaving the island’s school system, which employs 32,000 educators. Months before Hurricane Maria shut down all 1,113 public schools in Puerto Rico, nearly 200 were shuttered because of a dire islandwide financial crisis. Keleher did acknowledge, however, that problems could arise down the line if too many teachers in hard-to-staff roles, like English, resign.

“I have some schools where there’s 72 kids, and my school budget is $500,000, and 92 percent of that budget goes to payroll, so I don’t have an immediate problem of teacher flight because school consolidations was something that was contemplated before” the storm, Keleher said.

As for students who’ve left, Puerto Rican officials are working to ease their transition to mainland schools. The Puerto Rico Department of Education announced last week it is developing a web portal to send students’ transcripts to their new schools. Although Keleher said she anticipates some of the children will return, Martinez said the students he spoke with have no intention of leaving their new homes.

Espino said the biggest challenges Puerto Rican students face in Orlando are language barriers and efforts to make new friends. But the district’s desire to hire Puerto Rican educators, she said, demonstrates its commitment to its newest arrivals. The biggest adjustment for Espino, she said, is that students come to her classroom at a large range of proficiencies.

“With hiring me, it’s just demonstrating the effort that the school is making to provide some way that these students can feel better, that they have someone to connect to, that someone is going to help them out with that language barrier as well,” she said. “I was able to communicate, ‘That’s what I’m here for. I’m here to help you out. If you need anything, let me know. I am learning just as you are. I am adapting just as you are.’ ”