How to Elect — and Get Rid of — a Teacher Union President 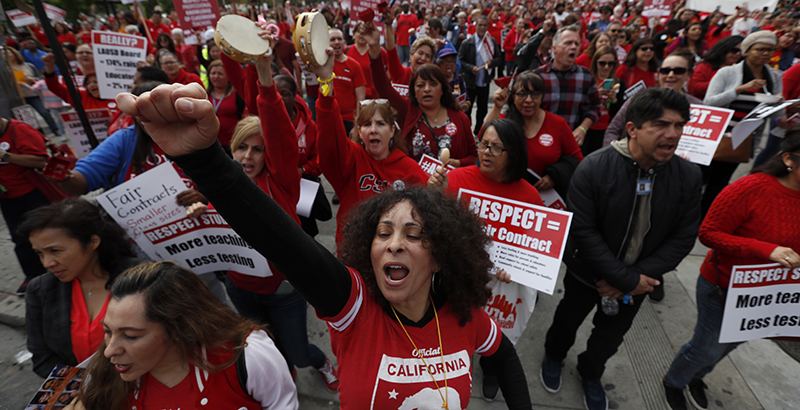 We tend to look at teacher unions as monolithic organizations, but they have internal factions. There are unionists who want to focus on traditional needs of members, such as salary, benefits, and working conditions, and others advocating for a broad social justice agenda.

The former are a majority among union leaders, but the latter have won noteworthy victories in places like Massachusetts and Los Angeles, and they are a growing influence within both the National Education Association and the American Federation of Teachers.

Social justice activists tend to be firebrands rather than negotiators. The type you have locally will have a major effect on education policy. For example, the Los Angeles Unified School District has had difficulties over the years with a number of traditional teacher union presidents, but only now is it facing the growing probability of a teacher strike, largely because the current union president is determined to create a movement more than create a reasonable agreement.

There is no clear pattern in the way more militant union officers rise to the top. Most NEA affiliates practice term limits and most AFT affiliates do not, so you would expect more upheaval at NEA. Yet only a small number of NEA state affiliates are headed by agitators, while AFT affiliates in Chicago and Boston elected rabble-rousers. It’s safe to say, however, that at the national level both unions are still dominated by traditionalists.

“NEA’s unwritten succession practice is stricter than that of the British monarchy.”

So if you are the president of a large state affiliate and have ambitions to be the head of the national union, you have an 18-year wait. A system like that isn’t designed to attract boat-rockers. Once in the pipeline, your accession to the throne is inhibited only by whether any of the other five members of the executive committee harbor the same ambitions.

For the most part, neither the national unions nor their affiliates use a popular vote, though there are exceptions. Executive officers are elected by the union’s representative bodies. NEA practices one delegate, one vote. AFT weighs votes by the size of the local that the delegate represents: the vote of a New York City delegate counts more than the vote of a delegate from Utica.

Turnout is a persistent problem regardless of method. Rank-and-file elections of officers rarely turn out more than 20 percent of eligible voting members. When only representative bodies elect union officers, less than 1 percent of the actual membership casts votes.

Ingram was the state union’s vice president, and he ran against the incumbent president, Joanne McCall. During the campaign he painted McCall as ineffective and insufficiently active. “We are in the fight of our lives,” he wrote when announcing his candidacy. “Make no mistake about it. Our anti-union opponents are not coming after us because of who we are; they are coming after us because of who we can become. We simply can’t continue to conduct business as usual.”

Analysis: Teacher Unions Focusing Efforts on Eight States as They Look to Impact 2018 Midterms — and Control of the Senate

That’s the message of challengers everywhere, but Ingram had previously been the president of the state’s largest local, the United Teachers of Dade. He won the UTD endorsement for the state presidency and that of another huge local, the Broward Teachers Union. Since the Florida union utilizes the AFT method of weighted voting, that all but ensured his victory, and he came away with 64 percent of the vote.

Ingram had earlier won a five-candidate, popular vote election to the UTD presidency, although that 2013 race was marred by irregularities and a voting machine breakdown. Three of the other four candidates filed challenges but were unsuccessful. “Never in my life have I witnessed such an unfair process in an election,” said one.

Because of its small size, the Delaware State Education Association is able to practice a statewide popular vote for its president. In January 2017, Matthews, the former president of the Red Clay Education Association, jumped the line to run against incumbent vice president Karen Crouse for the DSEA presidency, along with two other candidates.

The election ended in a tie between Matthews and Crouse, with each receiving 862 votes, or 7.2 percent of DSEA’s 12,000 members eligible to vote. Irregularities were reported here as well. A runoff was held, which Matthews won by 119 votes.

Matthews ran as a radical outsider, and most perceived him that way. A liberal blogger ally wrote at the time, “The little DSEA Star Chamber is fearful of Mike Matthews. If elected Mike Matthews will be the youngest president in the organization’s history and with youth some fear change.”

Despite this, Matthews’s tenure as DSEA president seemed relatively uneventful. Last week, someone used the Wayback Machine to turn up posts from a blog he created in 2004, titled Down With Absolutes!, and leaked it to public radio station WHYY. Unfortunately for his career as a union officer, some of his posts were littered with misogynistic and racist language.

I won’t repeat the details here, since they are easily found in the above link. Matthews resigned and issued a lengthy apology on Facebook. The union then issued a statement that the posts “were completely inappropriate and contrary to the views and values of the educators who make up the DSEA” and noted they “were created prior to Mr. Matthews becoming an educator and member of DSEA.”

Matthews clearly could not continue as the public face of Delaware teachers, and he accepted the blame, which is more than can be said for his union.

“I would hope that if anybody had this information, whenever they had it, they would have brought it to us and said, this should be a concern for your organization,” said DSEA executive director Jeff Taschner. “For whatever reason, they did not bring it to us. They decided to make it a news story, which they’re entitled to do. But then to try to hold the organization responsible or to criticize it for something that it didn’t know about, I think is unfair.”

The truth is, DSEA didn’t care what Matthews wrote until the WHYY story broke. I wrote about Matthews’s blog immediately after his election and wondered “whether his blogging experience ends up being a help or a hindrance in the big league of Delaware politics.” I guess we know the answer now.

There are many hurdles for “radicals” trying to work their way up the teacher union hierarchy. Some will succeed in working the traditional system to reach the state presidency, like Merrie Najimy in Massachusetts, Corey Rosenlee in Hawaii, and Ingram in Florida. Others, like Matthews, will falter. Whatever their politics, I take the appearance of organized opposition as a healthy sign for teacher unions going forward. A single voice may be more powerful, but it’s not democratic.