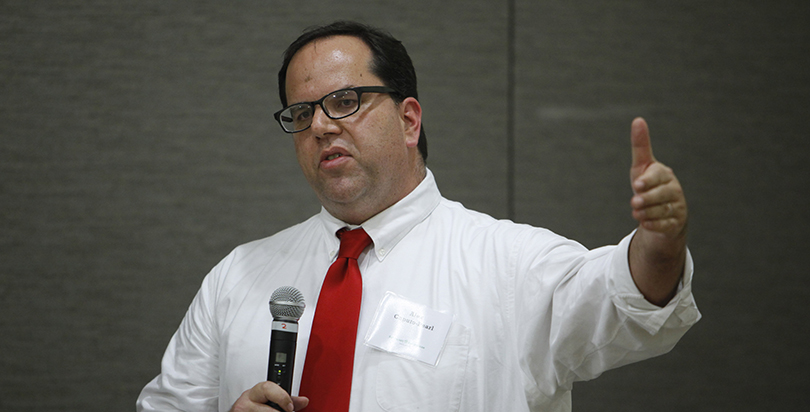 Mike Antonucci's Union Report appears Wednesdays; see the full archive.
Alex Caputo-Pearl is the president of United Teachers Los Angeles, a union that has a long and storied history of discarding presidents elected as firebrands but who reign as defenders of the status quo. Caputo-Pearl seems determined to end that cycle and bring teacher union militancy to the entire state of California.
In a July 29 speech to at the UTLA Leadership Conference, Caputo-Pearl outlined the union's plans as it readies for the expiration of its contract next year and a gubernatorial election in 2018.
“The next year-and-a-half must be founded upon building our capacity to strike, and our capacity to create a state crisis, in early 2018,” Caputo-Pearl told an audience of 800 activists. “There simply may be no other way to protect our health benefits and to shock the system into investing in the civic institution of public education.”
While it’s not clear what form a "state crisis" would take, Caputo-Pearl described a series of actions the union will undertake in coming months, beginning with a paid media campaign in September denouncing “billionaires… driving the public school agenda” and a “massive” political mobilization to ensure the November passage of Proposition 55, which would extend a 2012 measure that raised taxes on high-earning residents to fund schools.
UTLA will then set its sights on the next Los Angeles Unified School District board elections.
“We must face off against the billionaires again in the School Board elections of 2017, and WE MUST WIN,” Caputo-Pearl said, explaining that the next board would vote on a new contract. The union needed to help elect a board that would resist a “vigorous campaign to cut our benefits” by district leaders, he suggested.
But Caputo-Pearl isn't content to shape LAUSD's agenda. He hopes to organize the entire state.
“All of the unions representing LAUSD workers and the teachers unions in San Diego, San Bernardino, Oakland, and San Francisco share our June 2017 contract expiration date,” he said. “We have an historic opportunity to lead a coordinated bargaining effort across the state.
“Coordinated action could dramatically increase pressure on the legislature and fundamentally shape the debate in the 2018 Governor’s race.”
Caputo-Pearl stopped short of calling for a multi-city teacher strike, but pointing to a common contract expiration date that enabled "coordinated action" put it on the table.
The UTLA president had another white whale to harpoon: Proposition 13, the state's iconic 1978 initiative that capped property tax rates. Caputo-Pearl said he wanted to revive the union-backed "Make It Fair" campaign that sought to hike taxes on commercial property.
UTLA is in position to pursue an aggressive agenda because of its successful internal campaign to raise dues by 33 percent earlier this year and new joint affiliation with the National Education Association and the American Federation of Teachers. Now the union will launch an internal campaign to solicit more money from members in the form of PAC contributions, Caputo-Pearl said. Currently only about 20 percent of UTLA members donate to its PAC.
There will of course be organized opposition to Caputo-Pearl's vision for the future, and some of it may come from his own parent unions. While UTLA is by far the largest local of both the state NEA and AFT branches — the California Teachers Association and the California Federation of Teachers, respectively — these unions have their own officers and elected bodies that represent members throughout the state. Even if they agree with most of Caputo-Pearl's agenda, they may be wary of his ambition. Their leaders might remember that former UTLA president Wayne Johnson rode a 1989 teacher strike all the way to the presidency of CTA.
Caputo’s broad themes were underscored by a guest speaker: Karen Lewis, president of the Chicago Teachers Union and idol of advocates for more muscular union activism. She argued that teachers need to organize across district, state, and even union boundaries, telling conference attendees, "we cannot do this work alone, and we cannot do this work in isolation from one another."
If UTLA's agenda becomes the agenda of all California teacher unions and is ultimately successful, the union militancy train will leave the West Coast and travel through many other states. Union leaders comfortably situated in the status quo will have to jump aboard or get run over.
Submit a Letter to the Editor
August 10, 2016