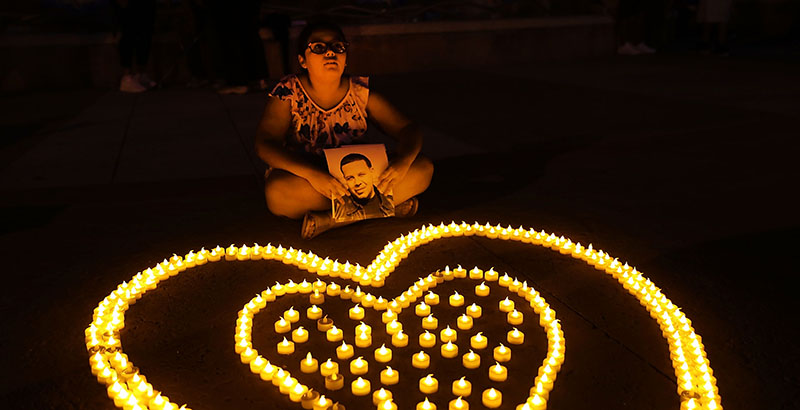 Gabriella Santamaria, 9, holds up a picture of her uncle Stephen, who died from a heroin overdose, during a candlelight vigil for victims of drug addiction on August 24, 2017, in the borough of Staten Island in New York City. (Photo by Spencer Platt/Getty Images)

In the Allegany County, Maryland, schools, the first sign of the opioid crisis was a drop-off in usually strong elementary school attendance.

David Cox, superintendent since 2009, said there has been a “dramatic change” overall in the past five years in his rural western Maryland district, “with each successive year getting progressively worse.”

The stories he shared Wednesday with a House Education and the Workforce Committee hearing on how the opioid crisis is affecting American communities were tough to hear.

Twice last school year, when Head Start teachers were making home visits, a preschooler answered the door and revealed his mother was “sleeping.” Both had overdosed; one was dead, Cox said.

In another family, a 5-year-old boy had been living for two days with his father and the father’s girlfriend, both of whom had overdosed and died. The dead couple were discovered only when the boy went to neighbors after running out of food.

There were “multiple” cases, in fact, in which parents overdosed and died with their children in the home, Cox told the lawmakers.

Teachers and school leaders in Cox’s district have dealt with students with increasingly severe behavioral problems, some requiring full-time adult aides, and mental health needs, the magnitude of which Cox said he had “great difficulty in finding the words to describe.”

“The good news is that for many of our children, their public school is the place that they are the most loved, best cared for, where they receive the best nutrition, and are the warmest,” he said.

It’s not just in Maryland that there are problems.

Rep. Joe Courtney, a Democrat from Connecticut, said he had recently visited schools in Enfield, where “behavior is just totally unprecedented in terms of what teachers and staff are seeing” among kindergartners whose parents and caregivers are addicted to opioids.

There’s been a problem with the youngest students bolting from the building, and the number of physical assaults by kindergartners has risen from one in the 2013–14 year to 14 last year.

“What it’s doing to teachers, these are veteran kindergarten teachers who are at the end of the school day in tears, because they are just so overwhelmed,” Courtney said.

The opioid crisis has touched all parts of the country. More than 65,000 Americans died in the 12 months ending in March 2017, a figure up nearly 19 percent from the previous year, according to the Centers for Disease Control and Prevention. President Donald Trump declared the issue a “health emergency” last month but hasn’t yet requested new funding to combat it.

Democrats had been sharp to criticize Trump for failing to ask for more money to confront the crisis, and those on the House committee Wednesday were no exception.

“To truly defeat this epidemic, we need to fully fund programs,” including Medicaid, mental health treatment, and education, Rep. Jared Polis, a Democrat from Colorado, said at the conclusion of the hearing.

Earlier in the hearing, he noted that the federal government has never met its requirement to fund 40 percent of special education costs under the Individuals with Disabilities Education Act. Schools are required to provide necessary services to children with special needs even if Congress isn’t providing enough dollars, meaning that money has to come from other places.

He also brought up Republican proposals to end federal Title II funding for teacher training and to cut Title IV grants that pay for an array of programs, including school mental health services.

The lack of IDEA funding “really imposes some hardships, and this issue impacts the [special education] needs that children have,” Cox said. “We have so many needs, and this opioid crisis has only contributed to that.”

Allegany County schools educate 8,700 students, 55 percent of whom qualify for free or reduced-price lunch, a common measure of poverty. About 16 percent have special needs, higher than state and national averages.

Average income in the county of 72,000, which sits on the state’s western panhandle, wedged between Pennsylvania and West Virginia, is about $41,000, according to Census figures. Most residents, 88 percent, are white and tend to vote Republican, including the 72 percent who backed Trump last year.

Allegany County’s population-adjusted overdose death rate from 2011 to 2015 was the sixth-highest in the state. Numbers skyrocketed in particular in the past few years: the number of overdoses doubled from 2014 to 2015, and again from 2015 to 2016, according to state health department figures. There were 59 overdose deaths last year, and there have been 27 so far this year, Cox said.

Starting this school year, every school in Maryland must stock Narcan, the antidote to opioid overdoses.

Cox also urged that Title IV dollars be made more flexible. His district gets about $70,000 a year, he said, but he has to fund three programs with that money. If he could pool it instead, he could hire another sorely needed behavioral specialist for his elementary schools, he said.

The crisis will affect schools in other ways in coming years, too, as the number of children born addicted to drugs face lifelong health and academic problems, witnesses warned.

“We are seeing a skyrocketing of the number of babies who are born addicted to opioids,” Dr. Leana Wen, the Baltimore health commissioner, said.

Nationally the number of babies born addicted to drugs increased fivefold between 2000 and 2012, according to government statistics.

One remedy would be home visiting programs to help pregnant women avoid drugs or get into treatment before babies are born, Wen said. The federal program funding home visiting expired at the end of September.

Those children’s executive function skills are affected long-term, Cox said, forcing teachers to change the way they educate them.

New Data Suggest Pandemic May Not Just Be Leaving Low-Income Students Behind; It May Be Propelling Wealthier Ones Even Further Ahead