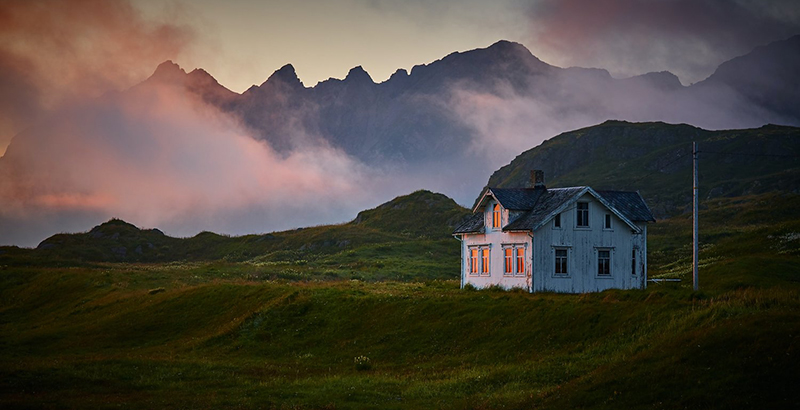 When the Almeda Fire hit southern Oregon on Labor Day weekend just over a year ago, Christy Brooks was on her way home from her daughters’ school after picking up books and a computer in preparation for the coming year. The air was smoky and smelled burnt, but Brooks doesn’t remember feeling overly concerned.

She stopped to buy drinks at a Chevron station. Five minutes later, when she came out and started driving to her mobile home at an RV park on the outskirts of the community of Talent, the sky had darkened and had an angry orange tinge. That was scary enough, “but when it started to rain ash, I knew something was wrong, something was really wrong” said Brooks. She fled with her 6- and 12-year-old daughters, narrowly escaping the fires that destroyed more than 4,000 homes across the region and scorched 1 million acres.

Brooks stayed at a friend’s house in nearby Junction City for a few weeks before returning to her trailer. It was still standing, so she wasn’t eligible for FEMA assistance, but it had been extensively damaged by smoke and heat, and the water that was used to fight the flames had caused mold to proliferate. Still, with nowhere else to go, she and her daughters stayed there until the Red Cross deemed it unlivable and put them up in a motel in Ashland, several miles away, for three months. Finally, the Phoenix-Talent School District provided them with an RV and a spot to park it at Emigrant Lake, just over 12 miles south of Ashland. It was in a different school district, and several other displaced families were also living there.

In the last three decades, climate change has more than doubled the amount of area burned in the U.S, most of it in the West, and the fires to come are likely to be even more frequent and larger. But not everyone will be equally affected. A recent study from the University of Washington found that communities of color are twice as vulnerable to wildfires as other, largely white communities. And children — who experience disrupted routines more acutely than adults — are hit the hardest. The sense of displacement, lack of a permanent home and constant, confusing reshuffling can lead to mental health issues and affect educational outcomes. “Their concentration was shot after the fire,” Brooks said, speaking of her daughters. “They need something stable — not wondering if they have to move somewhere else, or switch rooms. They need to feel safe.”

Now, the city of Talent is working to provide that stability through a new initiative: providing long-term affordable housing in the local school district for those displaced by the fires.

Affordable housing was already lacking in the region before the fires, said Michelle Glass, director of Rogue Action Center, a southern Oregon housing justice nonprofit that works at the intersection of housing, climate and racial justice. So in 2019, the city began accepting proposals from developers to create what was called the Gateway project, a 4.5-acre mixed-use housing development with a focus on affordable housing.

Then the 2020 fires tore through the Rogue Valley, destroying an estimated 600 homes in Talent, including some of the last remaining affordable housing, many in low-income Latino neighborhoods. Between 1,500 and 2,000 people were displaced in Talent alone. The housing shortage had become a full-blown crisis.

More than 24,000 Oregonians applied for FEMA assistance after the fires, but over 57% of them were turned down. Now, a year later, hundreds of Oregonians are still living in hotel and motel rooms, far from their schools and workplaces.

The disruption was especially hard on school-aged children. “Kids are widely known to be the most vulnerable group post-disaster,” said Betty Lai, a clinical psychologist at Boston College who studies how children respond to disasters. Children are more vulnerable to air pollution and physical trauma, as well as to the emotional impact of losing their homes and possessions. It also disrupts their education, especially when they end up housed in a different school district.

“When you’re a child that is from a more vulnerable or marginalized group, you’re at higher risk of experiencing recovery stressors. So those are things like not being able to go back to school, missing more school days, having to move multiple times,” said Lai. “And all of those pieces are risk factors for mental health distress and troubles with school.”

Research consistently shows that children need to return to their own communities after traumatic events. This is especially true in places like Talent, where almost half of the children in the school-district are Hispanic and many children live below the poverty level. They rely on schools for more than just an education; they also need access to free meals, counseling and homelessness assistance.

“We know that kids are connected to their teacher and their peers and their activities in their school,” said Brent Barry, superintendent of the Phoenix-Talent School District. “It is so important to keep that continuity because that helps with academics, social, emotional and mental health.”

After the fire, the Talent Urban Renewal Agency and the Phoenix-Talent School District switched gears and — with the help of donations from the state, private sponsors and nonprofit organizations — developed a plan to create transitional housing for fire survivors while permanent affordable housing is being built. Currently, 53 temporary housing units are available for local families who aren’t eligible for FEMA, with those who have school-aged children being prioritized. The families will start moving in this month.

“This is the first time a city or state has taken an innovative project of creating transitional housing from a natural disaster,” said Jon Legarza, executive director of the Talent Urban Renewal Agency, who is helping to build the project. Legarza has worked in post-disaster housing recovery for years. “Normally, it’s just FEMA, and then everyone else is lost in the aftermath.”

“I think it’s a great project,” said Erica Ledesma, though she doesn’t see it as a permanent solution and notes some frustration that the Latino community wasn’t included more in the process. The fire intensified the housing crisis in part because people didn’t own their land, she said; they simply rented, and so were also threatened with eviction. Plus, they lacked access to many of the state and federal grants for rebuilding designed for homeowners.

Ledesma, who worked closely with the Latino community after the fires, assessing their needs, was moved to co-found her own organization, Coalición Fortaleza. The organization aims to create more resident-owned communities or cooperative housing models to help counter the extreme housing inequality that exists. “Most people want to buy their homes, but credit is such a barrier for people, especially when they’re seasonal workers,” she said.

Brooks, who lives with a disability that currently makes it impossible for her to drive, is one of the 53 families selected to move to the Gateway project. She is relieved to find a stable place closer to the community services she and her children depend on. She’ll be able to move onto a temporary spot in the Gateway project, and later on, she’ll move into permanent affordable housing. “Being in town would be the biggest blessing right now,” she said. She’s excited to be inside the city and have grocery stores within walking distance, and be closer to the doctors and the school. “Out here, we are so far away.”

This originally appeared at High Country News and is published here in partnership with the Solutions Journalism Exchange.