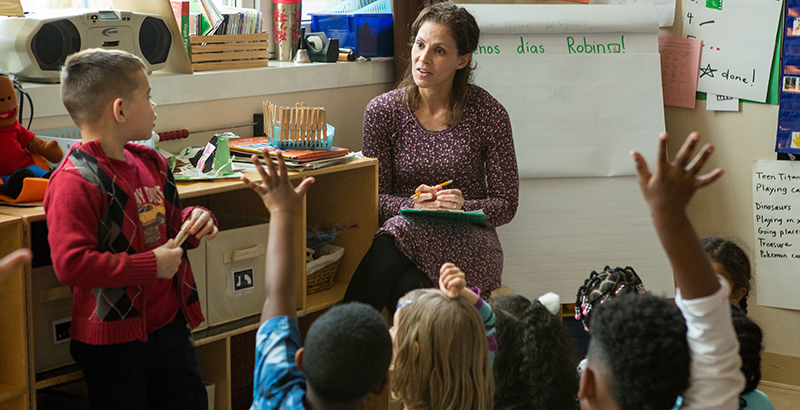 As children return to school this fall, the education world is being roiled by the critical race theory non-issue. I say non-issue because no school or district is teaching graduate-level content, or something like it, to K-12 students. I worry, however, that the CRT debate is a distraction from a more critical question: How do adults engage with students so that they feel seen and appreciated, and make schools places where all children feel they can truly be themselves?

A recent report by the Rand Corp. showed that Black and Latino parents were far more likely than white parents to keep their kids home to learn even if their local schools returned to in-person classes; 25 percent said their child felt safer and did better online than in person. This tracks other research indicating that 20 percent of students ages 12 to 18 report being bullied at school, and nearly a third of teens report feeling pressure to “look good” or “fit in socially” in ways that distract them. Many students who identify as non-majority in some way, whether on the basis of race, ethnicity, gender identity, learning or cognitive differences, found relief in online learning, avoiding school environments that often felt unsafe.

The Leon Lowenstein Foundation funded a coalition of organizations led by a team at Next Generation Learning Challenges to try and understand why some schools and programs were more successful than others at keeping students engaged in learning during this last year. The early results of the What Made Them So Prepared? project indicate that at least part of the answer is that adults in these programs — schools that I term human-centered in their approach to education — had already shifted how they related to students. These programs design themselves around values such as interdependence, collaboration, community and diversity, which stand in contrast to the industrial model of school. Students at these schools report, both in general and during the pandemic, that they continued to feel connected, known and supported as both people and students by adults and their peers.

My career has been spent studying these schools and understanding what makes them so successful at cultivating a sense of belonging. Their ability to do so empowers students to engage in difficult conversations about issues like race, poverty and trauma in ways that are strikingly absent in the vast majority of schools. One of the biggest factors is how adults show up. While it may seem simple, the knowledge and skills necessary to be physically, mentally and emotionally present for another person, so they, in turn, feel emotionally and physically safe to be themselves, are not ones that most of us have ever learned. If I don’t feel strongly grounded in my own sense of self, it is going to be very difficult for me to feel safe letting others be who they are, allowing them to experience and process difficult emotions like anger, grief or rage in my presence.

Being able to do so fundamentally changes the nature of the relationships inside the classroom or school. The adults in these programs have done the deep and often uncomfortable work of surfacing their unconscious beliefs, biases and assumptions, and becoming more conscious of how those can unintentionally emerge in what they think and how they act in terms of what they believe a child can do, whether that child is “good” or “bad,” “smart” or not. Because they have done the work, these adults have the skills and tools they need to change how they engage with others, especially students. This enables them to create an authentic sense of relatedness and belonging, and helps them to model for young people what it means to do the same for each other — and to support them in doing so.

For many reasons, most of us have never had a chance to develop these skills. We see this play out in civic and political discourse, as more people are increasingly unable to engage in conversations that challenge their own values.

It is tempting to believe that changing a curriculum to include more explicit conversations about race, privilege and identity will make schools safer for diverse student groups. But just introducing new content will not change much. The power of this work comes only when adults can engage in robust conversations about the implications that the content and ideas will have for their daily interactions and relationships with students. For example, if educators teach about how America’s economic and social systems were designed to disadvantage people of color, students may well cite personal experiences or observations about how this plays out for them or their community. Teachers need to be prepared to facilitate such discussions, which is not easy.

Schools will not truly change until the nature of the relationships inside them changes. Educators need support as they learn to make space for the types of interactions and conversations students most need if they are to feel seen, known and accepted fully, regardless of what content is covered in the formal curriculum.

Ulcca Joshi Hansen is chief program officer at Grantmakers for Education. A one-time English learner and first-generation college student, she is a mother of two, a former elementary school teacher with two decades of experience in education and author of “The Future of Smart: How Our Education System Needs to Change to Help All Young People Thrive.”

Ulcca Joshi Hansen is chief program officer at Grantmakers for Education. A one-time English learner and first-generation college student, she is a mother of two, a former elementary school teacher with two decades of experience in education and author of “The Future of Smart: How Our Education System Needs to Change to Help All Young People Thrive.”