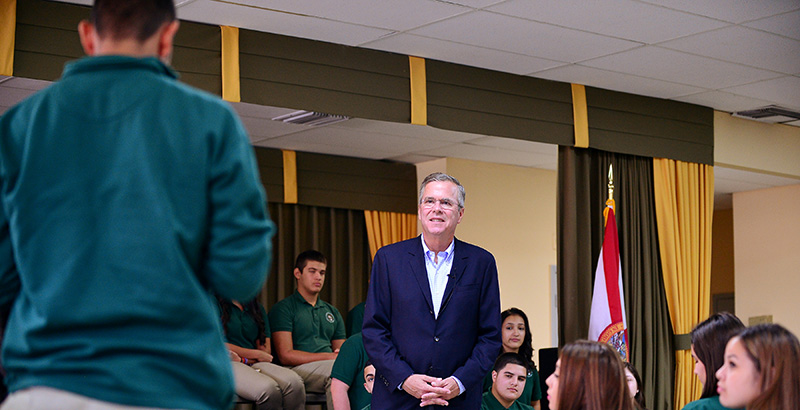 Without aspiration, our great country becomes just another country.

And so it is disturbing when current surveys show that young people believe they will be worse off than their parents, and their parents agree with them. And when statistics reveal that those born into poverty are likely to remain stuck there, more so than at any time in our recent history.

Ensuring the American Dream does not become an American myth is as great a challenge as any we face today. Various pundits have their reasons for how we got here, but there remains one solution without which all others will fail.

In an economy where knowledge is king, that solution is a quality education. When we deny knowledge to children, we deny them a meaningful future. Yet it happens every day in classrooms across our nation, from our urban centers to our rural outposts.

Limiting our options to address this is no longer an option. We need to think big and act boldly.

We responded with rigorous accountability measures but knew that was just part of the answer. So we added robust school choice policies to give parents options if assigned schools were not working for their children.

We opened the door to charter schools. We created Opportunity Scholarships, the nation’s first statewide voucher program, for students in consistently failing schools. Unfortunately, the program was ultimately felled by the court system after years of litigation from the teachers unions. But we followed it with Florida Tax Credit Scholarships for low-income students and McKay Scholarships for children with disabilities. In 2002, Florida passed a constitutional amendment to make voluntary pre-kindergarten (VPK) available to all 4-year-olds. Today, Florida’s VPK program is the largest universal pre-kindergarten program in the nation and the largest school choice program in America, with more than 175,000 students participating.

All three programs are flourishing today, with Florida now having more students enrolled in choice programs than any other state in the nation.

74 Interview: Jeb Bush — Yes on Choice and Standards, No on Trump and Clinton

The dual strategies of accountability and choice resulted in a dramatic turnaround in our education system.

We exposed the false narrative that choice harms public schools. In Florida, they are performing better than ever in categories ranging from early-grade literacy and success in college-level coursework to improving graduation rates.

Not only do students in choice programs benefit from them, so do students who remain in traditional public schools.

The academic gains of our children — particularly for those traditionally underserved — and the response from parents have been overwhelmingly positive. And because of that, succeeding generations of state leaders expanded these opportunities.

Initially, choice was a conservative initiative. But over time, and as the results became clear, it has garnered bipartisan support across the country.

Choice is not an attack on public schools, as those vested in the status quo claim. Instead it is a recognition that parents without choices are parents without power. And we have seen the consequences of that play out for their children. This is why Martin Luther King III led 10,000 supporters of the Florida Tax Credit Scholarships in a Tallahassee march last year.

We still have far to go, but the progress Florida has demonstrated in our laboratory of change has led other states to develop their own innovative choice programs. The pace, however, remains far too slow given the challenges ahead.

Today, only a third of high school graduates nationwide are college- or career-ready.

American students recently fell to 37th in the world on international math assessments.

And a recent report looking at adult competencies purports that more than half of U.S. millennials are unable to effectively apply literacy or math skills in the workplace.

It is hardly surprising that last year, the Labor Department reported there were 5.9 million job openings in the U.S. that went unfilled because employers couldn’t find enough skilled workers. Consider the lost productivity that number represents in an economy stuck in two-percent-growth mode, an economy facing the crushing burden of massive debt and unfunded entitlement programs.

Also consider this situation only getting worse. A recent study by McKinsey & Company forecasted that nearly half of the jobs American workers are paid to perform – representing $2 trillion in wages annually in the U.S. – could be automated in some way using current technology.

The world is moving faster than ever. And it’s getting exponentially faster each day.

Never has there been a more significant point in our history to rethink how we equip our children with the tools of critical thinking and in-depth knowledge so they can survive and thrive in this disruptive era.

We know that a well-designed accountability program can drive improvement. But it cannot bring the rapid change that is required. It does not address the one-size-fits-all approach of public education. It does not foster the kind of student-centered approaches we are seeing in so many successful charter schools. For these, we need a vibrant marketplace of educational opportunities from a variety of providers.

It only makes sense. America has the most diverse student population in our history. These students don’t all learn in the same way or master all subjects at the same speed. They live in a world in which technology has personalized almost every facet of their lives, yet we seek to prepare them for the 21st century with a 19th century education system.

There is no conflict among the programs. None begrudges the expansion of the others. We have worked out accountability systems that do not infringe on private providers. And, ultimately, schools in Florida are now held more accountable to families via their ability to vote with their feet.

A parent seeking a better educational fit for her child doesn’t care what program allows her to do that. She simply is focused on her child’s future success, and that should be the expectation for every American student.

This essay also appeared in the October 2017 issue of The Line, a publication of the Frontline Research & Learning Institute that is dedicated to providing ideas and insight and encouraging civil discourse on the most pressing K-12 issues.