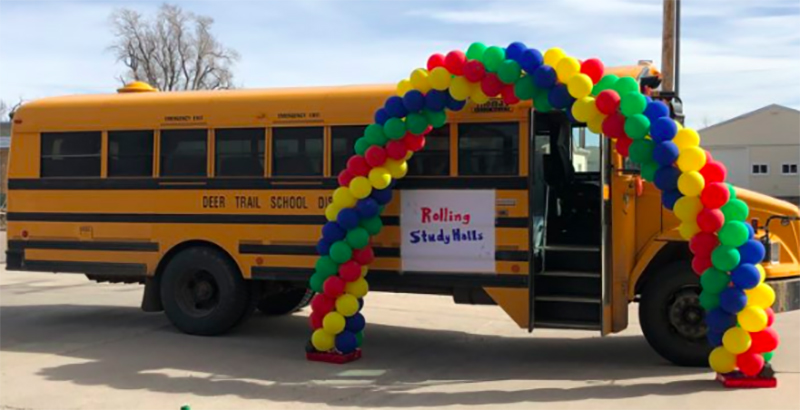 Kids in rural parts of the United States spend up to four hours a day on the road to and from school. When they finally get home, many have no access to high-speed internet. This double whammy leaves them in an academic and technological backwoods that’s a heartbreaking barrier to their job prospects in the 21st century.

That’s why Google, in a continued push to bring these students up to speed, has expanded its Rolling Study Halls into 16 more rural districts across a dozen states.

Building on highly successful pilot programs in South Carolina and North Carolina, the pep-rally-like enthusiasm for these launches has been infectious.

What you are looking at is my team’s excitement after we wrapped an event that we are just over-the-moon about. Google’s #rollingstudyhalls is an initiative that we were lucky enough to pilot last year at an event in #ststephenssc and were able to launch today, officially, in #deertrailcolorado at the Deer Trail Secondary School. This is a phenomenal program that puts wifi on busses to help students in rural communities with long commutes or low access to internet reclaim some time by allowing them to study and learn on their way to and from home. In addition to feeling great working on a program like this we loved creating our pep-rally look/feel! (We may or may not have used scented markers for our signs.) To read more about the program from the woman who turned her idea into action – check out Lilyn Hester’s blog post: https://www.google.com/amp/s/www.blog.google/topics/grow-with-google/rolling-study-halls-turning-bus-time-learning-time/amp/

A post shared by PinPoint Productions (@pinpointproductions) on Apr 2, 2018 at 4:24pm PDT

Berkeley County School District, in collaboration with our partners at Google, unveiled South Carolina's first ever…

The tech giant aims to bridge the “homework gap” in remote, low-income areas with free Wi-Fi, Chromebooks, and onboard teacher tutors, turning school buses into mobile classrooms that bring the world outside school right to the students’ seats.

“Now that I have Wi-Fi on the bus, I’m able to get most of my homework done before I even step foot in the door,” says aspiring lawyer Kaelyn, 14, of Lenoir, North Carolina, in a video Google posted on YouTube chronicling its 2016 partnership in the program with education leaders in Caldwell County.

“The use of technology on buses gives an opportunity for all of our students to keep up,” says Matthew Ross, history teacher at Gamewell Middle School in Lenoir.

“The average bus ride in Deer Trail is between 40 and 110 minutes. That’s nearly two hours one way for some of these kids to coming to school. They’re going to have tutoring on these buses,” Gardner told The Denver Channel.

This is what it looks like when Google takes over a town with 600 people living in it. The tech giant launching nationwide “Rolling Study Halls” today in Deer Trail Colorado. That means students with long rural commutes will get WiFi on buses to do homework #google pic.twitter.com/ztaRqe3saU

So much so, that there’s at least one request for the program to expand overseas.

@Google are you planning to launch the similar scheme on the lines of Rolling Study Halls, which was recently launched in the US, in India too? @sundarpichai